Liverpool face Arsenal in their first game against one of last season's top six in the Premier League.

The reds have 'rested' Simon Mignolet who has played the first 4 competitive games in the season in which he had one clean sheet and conceded 6 goals.

Alexander Arnold makes way for Joe Gomez at right back but remains in the matchday squad.

Meanwhile Andy Robertson is unavailable due to the birth of his child earlier today - Alberto Moreno maintains his position as left back.

The decision to leave Simon out of the squad was rumoured this morning and was something of a surprise.

But Klopp has added:

“He didn’t want to rest, it’s not a problem. We spoke yesterday about it and I really thought it made sense, especially because we have the quality in behind.

“It is just because I want to let him have a rest after this really intense time with really good performances for us. 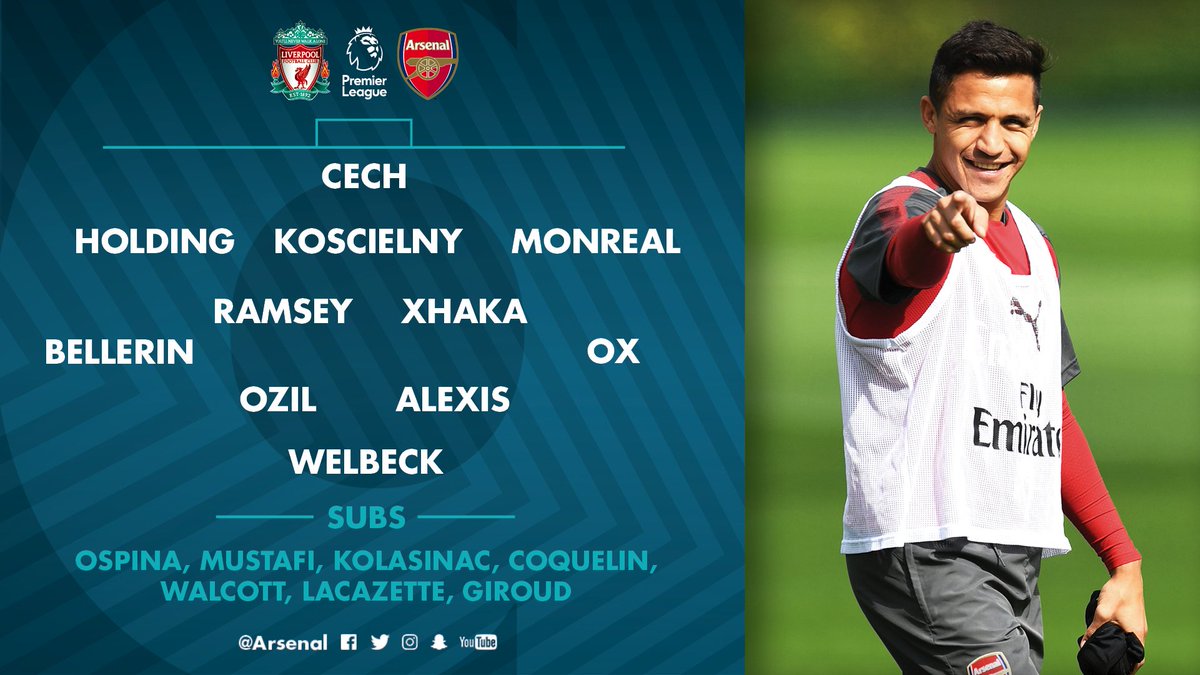 Liverpool and Arsenal were closely matched in the 2016-17 season.

The reds finished just one point ahead of the Gunners, scored 1 goal more and conceded 2 less.  A paper thin advantage that saw the reds qualify for the Champions League and Arsenal placed into the Europa League.

That advantage was sealed thanks to Liverpool winning home and away against Arsene Wenger's side.

The North London club will no doubt be fired up to try and serve up some revenge today.

Rich Marotta: Who needs a rest three weeks into the season. Something is going on.

Yonathan E: Klopp is mugging fans off. You don't 'rest' your starting goalkeeper for a big game.

5 minutes till kick off

Salah dinks a ball over the box, Mane can't make contact but collects the ball.

Finds Moreno who whips in a cross - Emre Can attacks the header but it goes wide.

Wow - Liverpool on top and Emre Can with a great ball across the face of goal and Salah is in - great reaction by Cech to keep the reds forward out.  Could he have done better?

And it's ROBERTO FIRMINO!

He heads past Cech from a Joe Gomez cross.  Well deserved lead to Liverpool.

Plenty of energy from Jordan Henderson who, combining with Firmino, nearly adds a quick second.

Emre Can another player having a fine Liverpool game.

Mo Salah brings the ball down and he puts it wide - and then Wijanldum sets up Mane for a volley - again wide.

Liverpool 1 up but they will be hoping to add a second before half time.

And it's Sadio Mane

Liverpool deservedly 2 ahead - Sadio cuts inside and fires a right footed shot into the far corner.

'Poetry in motion' rings around Anfield.

It's been an impressive performance.

A fantastic half of football from Liverpool.  Should probably be more than 2-0.

Firmino and Mane with the goals that have put Liverpool ahead.  Emre Can and Jordan Henderson dominating the midfield.

Liverpool with 54% of possession.

There were four yellow cards that half - Lovren and Gomez for the reds, Welbeck and Xhaka for the Gunners.

Spurs are being held at half time at Wembley against Burnley 0-0.

Back underway for the second half.  Arsenal make a change at half time - Aaron Ramsey off and replaced by Coquelin.

A win for Liverpool this afternoon will put them back inside the top four after 3 games - just before the international break.

From the second half kick off Liverpool go on the offensive again - Salah drawing a save from Petr Cech.

And Mezut Ozil gets Arsenal's third yellow card - a frustrated tackle on Henderson.

Salah with the free kick towards the Kop, Emre Can heads it on, but Dejan Lovren can't get close enough to it as the reds display another well worked set-piece.

Mo Salah is looking for his 3rd goal of the season. He steals possession and powers towards goal.  His shot is saved and Henderson can only fire the rebound over.

Liverpool looking more likely to get the next goal here at Anfield.

Mo Salah races clear after winning the ball in his own half - goes the length of the pitch and slots it past Petr Cech.

"We want Wenger out" sing the Arsenal fans at Anfield.

This has been a wonderfully attacking performance from Liverpool - Coutinho would struggle to dislodge any of our current front three.

Alexis Sanchez looking thoroughly miserable on the pitch and Arsene Wenger looking it off the pitch.

Sanchez is subbed off and Giroud comes on to replace him.

Oxlade-Chamberlain off - Lacazette on.

Oxlade-Chamberlain, linked with a move away from Arsenal (possibly to LFC) is half-cheered off by the Liverpool fans.  He's been poor today.  Throws a tracksuit to the ground as he leaves the field.

All is not well at Arsenal.

He's been excellent again - time for Sadio Mane to make way - and on comes Daniel Sturridge.

Liverpool leading 3-0 against Arsenal and it's all looking very easy for the reds.

That substitution has rearranged LFC's fluid front three - Firmino replaces Mane on the left with Sturridge down the middle.

Chants of 'Olé' now everytime LFC touch the ball - Mane went off to a big standing ovation too.

Emre Can powers from midfield, lays the ball out wide to Salah who fires in an inch-perfect cross.

Sturridge is at the back post to smash the header in.

We're not even in the 80th minute at Anfield and Arsenal fans, understandably, are heading for the exits.

Our opening goalscorer, Roberto Firmino, goes off for a big Jurgen Klopp hug.  James Milner on to replace him.

Time for another standing ovation - Liverpool make their final sub and Emre Can goes off to be replaced by Marko Grujic.

The German midfielder has been magnificent yet again.

Fantastic performance, result and signal to the rest of the Premier League.

Thanks for joining us for our live match updates.  We'll have more reaction later this evening to the reds great performance and result today.

We hope you enjoyed that as much as we did!