There's a storm approaching Anfield this Friday evening but Kopites will still be hoping for a golden sky at the end of this impressive season.

The weather could get a bit wet with Storm Hannah barging in off the Irish Sea later this evening.  Jurgen Klopp was said to be disappointed with the dryness of the pitch at Cardiff last week - that is unlikely to be an issue this evening.

A Liverpool win would take us on to 91 points in the Premier League - no team has ever finished second with such a tally in England's top division.

With Man City enjoying the narrowest of league leads, Jurgen Klopp has re-iterated his motivation that Liverpool keep the men from Manchester honest by taking the Premier League battle all the way to the final league game in two weeks time.

After tonight's game, Liverpool will have to switch focus to another massive game - a European Cup semi final in the Nou Camp.

Chasing both the title and European Cup at the end of April?  That's the Liverpool I remember.

How it stands at the top

Two hours until kick off

That 8 goal difference is effectively 9 as they have scored more than the reds - Liverpool having the better defence of the two teams.

Alex Oxlade-Chamberlain ends his year away

He will be included in tonight's squad.

He has been out for exactly 1 year and 2 days - forced off in the 18th minute of LFC's 5-2 win v AS Roma in last seasons European Cup semi-final.

Mo Salah will make his 100th appearance for the reds.  He is currently on 67 goals.  He needs one more to equal the record for most goals in his opening 100 games.

Both Roger Hunt and Sam Raybould scored 68 goals in their first 100 matches.

Lovren in for Matip and Sturridge in for Firmino who is not in the matchday squad....

Roberto Firmino out with that muscle strain.

Fabinho you may remember came on as sub v Cardiff last weekend before heading straight back off after a clash of heads.

He misses out due to that clash of heads.

Karlan Grant is back in the team for Huddersfield

Klopp had to remember what to call Oxlade-Chamberlain

Klopp talks about the player returning after a year out

"Unbelievable. We had to think about when we wrote the names on the teamsheet today how we call him. Alex Oxlade-Chamberlain, there are a lot of options obviously – Alex, Ox, Chambo, whatever! It’s that long ago.

“It’s really nice, it’s really good news that he’s back. He has been back for a while and now today back in the squad, so it’s cool – really cool.”

Loud cheers at Anfield as the teamsheet is read out and pauses for Alex Oxlade-Chamberlain's name.

My word.  Naby Keita's SCORED in about the 15th second!

Easily defended by the reds.

6' Well after that whirlwind start, Huddersfield having a little bit of possession themselves now!

Reds straight out the blocks ⚡️pic.twitter.com/6hBDRsw0lt

17' Reds get a chance from a corner but van Dijk heads over.

23' The reds can breathe a bit easier now.  SADIO MANE heads in - assisted by Andy Robertson!

30' Chance for Sturridge who has a crack from the edge of the area.  Goes over the bar.

43' Intricate work from the reds in and around the box - it falls back out to Henderson....

45+1 Just before half time.  MO SALAH with his 68th goal coming in his 100th Liverpool appearance.  He's equalled the record we mentioned before the game.  Can he go one better.

We're back on it reds.

Liverpool kicking towards the Kop.

49' Looks like that ball was coming over for Sturridge, but Mane tries to latch on to it.  Ite ends up over the bar.

50' Bit of a strange fall there and a moment of concern as Virgil van Dijk looks like he's done something serious.

He's back up though to much applause!!

56' Alexander-Arnold crosses it in and Sturridge puts it away but is offside.

59' Sturridge cedes possession a little bit too easily there in the middle.

We're approaching the time that substitutes could start to get involved.

60' Naby Keita's earned himself some space here - he's approaching the box - he pulls the trigger and it just goes wide.

62' Some chance there for Salah who smashes one from the edge of the road.  Thought it was in.  Side netting.

66' Sadio Mane adds his second goal.  And Liverpool's fourth. Henderson sends it in and another header for Sadio Mane.

73' Sturrige and Wijnaldum go off.

Xherdan Shaqiri and Alex Oxlade-Chamberlain are on!

77' Good feet by Oxlade-Chamberlain in the box, he's turned his man, but he can't deliver the knockout blow.

Almost a hat-trick for Mane.  Shaqiri crosses to the back post but Mane's header rebounds off the post!

81' Into the last ten minutes now.

Liverpool are heading on to 91 points and are going back to the top of the league.  At least until Sunday anyway.

82' It's MO SALAH again.  Andy Robertson provides the cross and Salah with an easy touch to tap in.  His 21st Premier League goal of the season and a record breaking 69th goal in 100 games for the reds.

'Liverpool top of the league' comes the chant from the Kop.

Liverpool move on to 91 points - a club record. 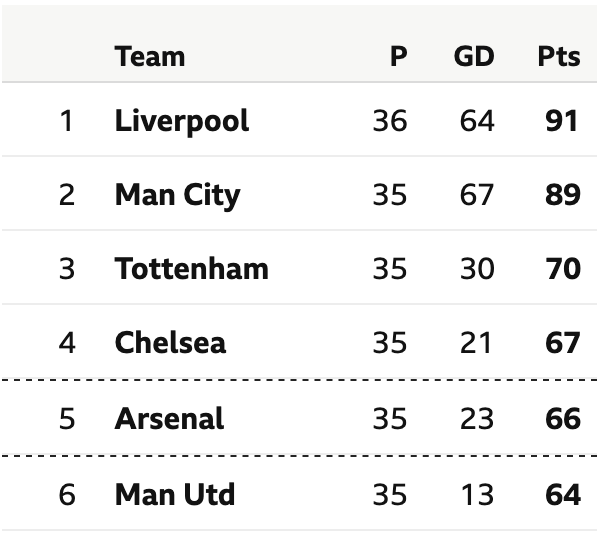 Jurgen Klopp saying how he thought the reds had scored too early.  Basically that it created problems because the players might have thought this was going to be a walk in the park.

It eventually was, but it took the reds about 10 minute to get their heads back together.

Klopp says he didn't mention goal difference to his players.  He said before the game that he would be happy with a 1-0 and 3 points.

‘I haven’t thought about Barcelona for one second up until now.

In my life I’ve probably watched them 100 times but we start now.

We have 5 days. It’s enough time to rest, prepare and recover. Let’s try it.'

That's all for now

Thanks for joining us.  A full weekend ahead now and fingers and toes crossed.

Barcelona up next. At the Nou Camp.