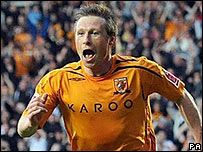 Former Liverpool player Nick Barmby is excited about returning to Anfield with Hull on Saturday. The Tigers will be making only their 7th ever trip to Anfield, after a fantastic start to the season which saw them setting the pace in the Premiership.

Barmby signed for the reds in 2001 when Houllier splashed out a whopping £6 million on the player – a controversial move as he was moving from Everton.

Speaking ahead of the weekend’s game he said:

“I loved my time at Liverpool, it’s a fantastic club.

“I was fortunate enough to win things there and it is one of the best clubs in the world. But I am more pleased for the fans to be going to places like Anfield.

“The atmosphere is fantastic there and to see their team playing against Liverpool in a league game is fantastic. Long may it continue.”

Obviously been a while since he’s been to Anfield then.