It's matchday 13 in the Premier League and Liverpool will be hoping to continue their recent impressive domestic record and strike a blow at the expense of one of their top four challengers.

Liverpool's home record v Chelsea in recent years has not been good - and Klopp has rung the changes for today's Liverpool side.

Both Firmino and Mane have been rested to the bench after their recent exploits - Oxlade-Chamberlain and Sturridge coming in to replace them.  Adam Lallana finally returns back to the LFC matchday squad - he is named on the bench - whilst Joel Matip recovers from injury and replaces Lovren.

Our squad (including Adam Lallana!) is here... ???? pic.twitter.com/IbpVfsDMHD

Jordan Henderson leads the Liverpool team out on to the pitch for this Saturday evening clash under the floodlights.

We're moments from kick off.

We are underway at Anfield.

Liverpool kick off towards the Anfield Road.

Chances for both sides in these opening 9 minutes or so.

Mo Salah picks up the ball at the edge of the Chelsea box but drives it over the crossbar.

13' Liverpool enjoying the lions share of possession.  They have Chelsea hemmed into their own half and it's good work by Moreno to win the ball back when it falls loose.

He crossed to Milner at the edge of the area but the vice-captain takes a poor touch and Chelsea get some breathing space.

15' It's a strong run from Oxlade Chamberlain from midfield - he managed to get the ball across the pitch surrounded by Chelsea players but Milner wastes the chance from 5 yards outside the area.

21' From the counter attack Hazard earns himself some room and fires in a shot from the edge of the box.  Mignolet tips it wide for a corner.

From the corner Mignolet comes for it but doesn't claim the ball - the reds clear.

Chelsea carve the reds up

23' Chelsea slice a ball through the middle, but Moreno puts enough of a challenge on Drinkwater to prevent him having a clean hit and Mignolet denies the chance.

And another chance for Chelsea - Mignolet tips the ball over

32' A foul from Joel Matip draws a free kick outside the area. Marcus Alonso fires his free kick just wide in front of the Kop.

39' Matip rises well to Hazard's corner and the best that Morata can do is to head the ball wide.

Liverpool probably edging possession this half but Chelsea possibly having the better chances.

And then Mo Salah with another left footed curled shot that just goes wide of Courtouis's goal.

44' Good work by Oxlade-Chamberlain to force his way through and get the cross over.  It looks like Coutinho was pushed by Hazard inside the box but no penalty is given.  Michael Oliver today's ref and he isn't interested.

Both teams trying for goals but it just hasn't happened yet.  Daniel Sturridge possibly playing a little too deep from where we may normally find Firmino.  Nothing much to fault with Liverpool's performance so far - Chelsea have been working very hard to get their players back whenever Liverpool go on the attack.

Still all to play for.

On the LFC bench this afternoon..

Will we see these two in the second half? 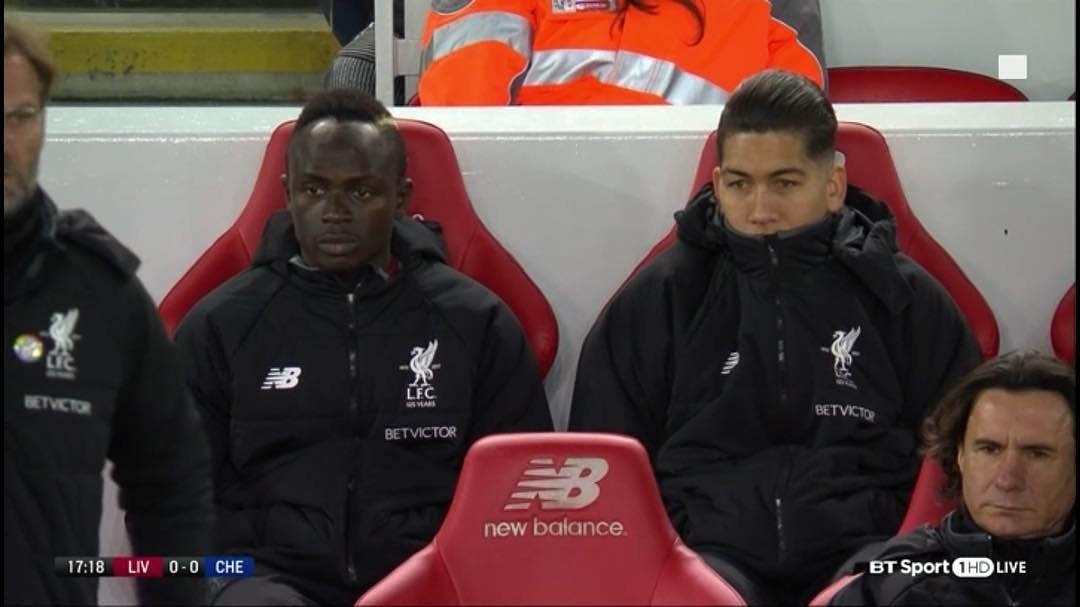 Mistake by Courtouis there.  Sturridge clips a relatively tame cross across the 6 yard box that Courtouis somehow concedes a corner from.

The corner comes over and Salah's shot is blocked by Bakayoko.

Second corner to the reds is cleared at the front post.

We are nearing the 60 minute mark and you get the feeling that changes will be on the way.

There's a shout for a penalty after Daniel Sturridge fires the ball in to the box but the Chelsea defender probably couldn't get his arm out of the way quick enough.

It's been 46 years since these sides last played out a goallless league draw at Anfield in the league.

We are nearing the 60 minute mark and you get the feeling that changes will be on the way.

There's a shout for a penalty after Daniel Sturridge fires the ball in to the box but the Chelsea defender probably couldn't get his arm out of the way quick enough.

It's been 46 years since these sides last played out a goallless league draw at Anfield in the league.

62' Ball sent over to Morata inside the box - Chelsea are really powering forward at every opportunity now.  But Klavan does enough to deflect the ball and Morata doesn't know a lot about it when it reaches him.  It goes wide of the Liverpool goal.

Liverpool's subs have had a little warm up but now returned to the technical area and put their jackets back on.

65' It's that man again!!! Mo Salah picks up a toe-poke from Oxlade Chamberlain - runs into the area and with his first touch slides it past Courtouis.

66' The Liverpool substitution was being prepared just before the reds took the lead - Wijnaldum comes on for Daniel Sturridge.

77' It's another change for Chelsea - they bring Pedro on for Bakayoko as they try and get something out of this game at Anfield.  Chelsea have gone off the boil a little bit now following the reds goal.

86' Recently introduced substitute Willian grabs an equaliser from Chelsea - it looked a bit like it was a cross from outside the area but it looped over Mignolet and the scores are level.

It's all over at Anfield.