Fresh from the disappointment of yesterday's draw against Everton, the reds had more exciting things on their mind on Monday morning.

The draw for the last 16 of the Champions League has been held at UEFA headquarters and Liverpool, five times European Champions, will play the runners up of group G - FC Porto.

Xabi Alonso picked the reds name out of the hat. 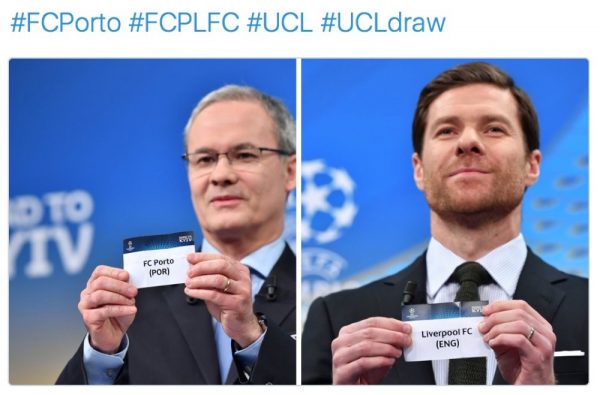 Elsewhere, Chelsea paid the price for only finishing as group runners up when they were drawn against Barcelona.  Spurs face Juventus, Man City take on Basel whilst Man Utd are drawn against Sevilla who finished runners up in our own group.

Liverpool have played Porto 4 times in competitive football and are unbeaten - however the reds have lost all 3 friendly games played against their opponents.

We met Porto in the 2000/01 UEFA Cup 5th round where the reds were held to a 0-0 draw away before winning 2-0 at home.  Liverpool went on to clinch the trophy that season.

And the other meeting was in the 2007/08 Champions League group stage.   Again it was a 1-1 draw away before the reds won convincingly 4-1 at home.

Because Liverpool are one of the group winners the first game will be in Portugal - with the return tie at Anfield.

Liverpool's game dates have been confirmed as 14th February ❤️ (A) and 6th March (H).