Liverpool have finally announced the signing of Uruguayan forward, Darwin Nunez, from Benfica.

The Portugese side had already announced the terms of the deal on Sunday evening with the reds making an inital payment of £64M for the player.  A further potential add on of up to £20M will be based upon appearances and success in his transfer.

The player, who turns 23 next week, missed a game with Uruguay at the weekend to complete his transfer to Anfield and underwent a medical yesterday.  The deal is still dependent on gaining international clearance and a work permit but as a international striker this is unlikely to be an issue.

After a tour of the Liverpool training facility at Kirkby the player said:

'When I arrived at the training ground, I was really surprised to see the set-up and the structure and all the trophies here. You can then imagine yourself winning more trophies and then later on when you come here again and see the trophies on display, you can say, 'Look, I was a part of that, I was there at that time, winning trophies.' That's one of the reasons why I came here to Liverpool – to win trophies and titles. I want to win a lot of trophies at Liverpool.

Nunez obviously got Klopp's attention in two games against the reds this year in the Champions League, where he played at Anfield.

It was a spectacular experience seeing what the fans are like in the stadium. It's an incredible atmosphere. I think Liverpool have got absolutely everything – good players and supporters who really help the team at certain points in the game. So, yes, I think it is a very big club and it's going to be great here.

“He has all the pieces we look for. He can set a tempo, he brings energy, he can threaten space from central and wide areas. He is aggressive and dynamic with his movement.

“He plays without fear, he’s powerful. I know he will excite our supporters.

Darwin Nunez has been handed the squad number 27. 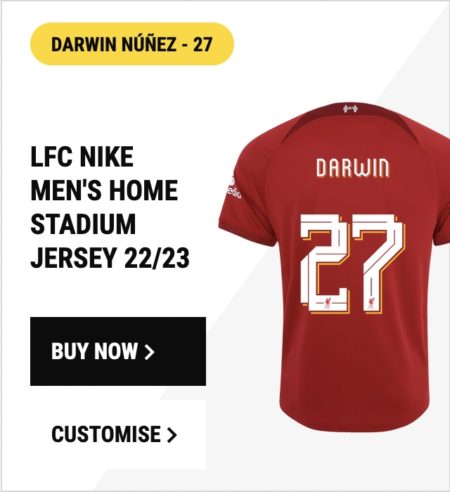