Liverpool did all the business with a supreme first half performance that helped them to a 3-0 half time lead.

Sadio Mane was dropped to the bench, whilst Adam Lallana joined him with the subs - his first involvement in an LFC squad since his summer injury.

Joe Gomez, Jordan Henderson and Simon Mignolet were amongst those recalled to the Liverpool line up.

The reds started brightly and continued their momentum throughout a dominant first half.

Phil Coutinho had his sights set early when he saw a shot rattle off the inside of the post.

But it wasn't long before he got a deserved goal for his opening play.

Picking up a ball from Andy Robertson he ran 30 yards forward before placing the ball with panache into the goal at the inside post.  The overlapping run from Andy Robertson did help distract the defender who made the reckless mistake of giving the Brazilian too much space.

From a corner the ball looped towards the touchline, but Firmino stretched and hooked the ball back - and it was Dejan Lovren who reacted quickest to head the ball in. 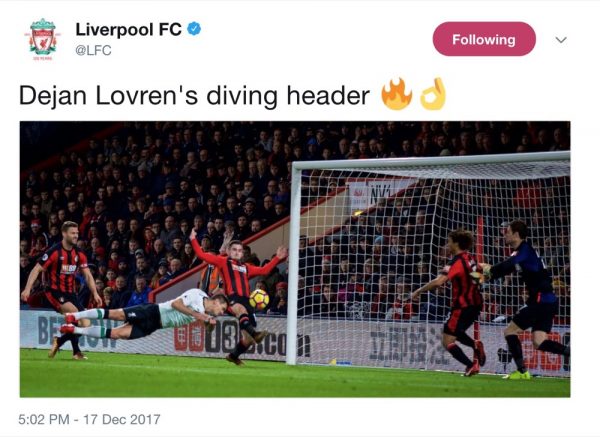 Jermain Defoe did smash a shot of his own against the post to fire a warning to Liverpool, but it was Mo Salah who scored the third, and his 20th, as half time approached.

Sent a delightful ball down the wing, Salah moved the ball inside before twisting the defender and firing in the goal.

Another 3-0 half time lead for Liverpool but they came out at the start of the second half with more of the correct attitude.

As it happened: Bournemouth 0-4 LFC

Oxlade-Chamberlain continues his dramatic improvement, after winning the ball back he powered forward and was unlucky to see his shot rebound off the post.

But Coutinho was involved yet again for Liverpool's fourth.

He picked up the ball from a thrown in and then swung in an in-swinging cross straight into the area which Firmino deftly nodded in to the net.

Klopp saw his chance and brought off Salah and then Firmino, with Lallana on and then Dom Solanke.

The reds move back into 4th place with a big clash away at 5th placed Arsenal on the horizon for next Friday.