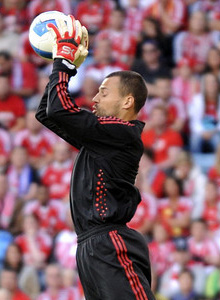 Diego Cavalieri became the third Brazilian player to join Liverpool, when he signed in July 2008 for a fee believed to be around 3.5 million pounds. With Scott Carson leaving Liverpool and question marks over the future of Charles Itandje, Diego was brought in to be backup for Jose Reina.

The player stated it was his dream to move to a European club and on signing vowed to do his best to snatch the number 1 jersey from Reina.

Diego joined from Palmeiras where he had spent 6 years principally as understudy to club captain and Palmeiras legend Marcos.

Cavalieri made hs Liverpool debut against Crewe in the 2-1 victory at Anfield in the Carling Cup.  His next game was the Carling cup exit when the reds lost 4-2 against Tottenham Hotspur.  His Champions League debut came against PSV Eindhoven in December 2008, the final game of the group in which Liverpool ran out 3-1 winners to confirm their place as group leaders.