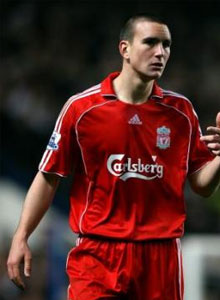 Comanding centre half Jack Hobbs was signed by Rafa Benitez in 2005 from Lincoln City after Hobbs played just three minutes of professional football. During that season he was made captain of the Liverpool reserves and played a key figure in the successful 2006 youth cup side.

His form earned him a handful of appearances including a surprise start against Reading in the Premiership last season. Although he ended the season on loan to Scunthorpe in the Championship. This season also sees Jack out on loan, this time to Leicester City in League 1 along with fellow Liverpool youngster David Martin.

Hobbs will be hoping to build on his five first team appearances for Liverpool and with Sami Hyypia reaching the end of his career it's only a matter of time before Hobbs is a permanant name on the Liverpool team sheet. (Billy Green)