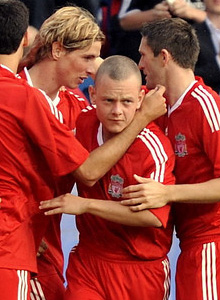 Jay Spearing is just one of the very talented youngsters Liverpool have on their books at the moment. He's a versitile player who can play either centre half or central midfield, although his small frame has some people worried about his chances of a centre half. One thing that doesn't have people worried is Jay's determination. His doggered style has won him a lot of fans in the Liverpool faithful.

Jay has came back from a broken leg to captain the Liverpool under 18s to their second consecutive Youth Cup in 2007. His broken leg ruled him out for most of the 2006 season but he was able to be used as a substitute in the final of 2006. 2007 was a fantastic year all round for Jay as he was voted the best player in the Torneo di Renate tournament. The anual under 20s tournament saw Liverpool finish third but Jay came out of the competition with flying colours.

This seemed to spur Jay on as he would then become one of the most valuable players in Gary Ablett's 2008 reserve title winning side. Spearing started in 17 of the 18 possible reserve league games last season scoring 4 goals from the middle of the park. He also played a big part in the reserves winning the Dallas Cup in the same year including a goal in the opening group game against Slavija.

Jay finally made his bow for the Liverpool first team in the final group game of the 2008-09 Champions League against PSV in Holland. He came on as a second half substitute for Albert Riera in Liverpool's 3-1 win, fellow youngsters Stephen Darby and Martin Kelly also made their debuts in the same game. Spearing's home debut also came in the Champions League, this time as a second half sub for Liverpool skipper Steven Gerrard against European giants Real Madrid. Spearing was welcomed to the pitch with the Kop singing

Jay finally did make his domestic debut against Leeds in a Carling Cup tie against Leeds before getting his first Premiership run out against Sunderland in the infamous beach ball game. He made a handful of other appearances during the 09-10 season before being sent out on loan to Nigel Pearson's Leicester side in the Championship.

It was while at The Walker's Stadium that Spearing scored his first professional goal against Watford in a comfortable 4-1 victory.

Since returning to Liverpool Jay played reguarly in the Europa league however he then had to spend time on the sidelines due to an ankle injury, he returned and was handed a premier league start agianst Everton in which he did well, he then had to endure another injury lay off, and should return soon. 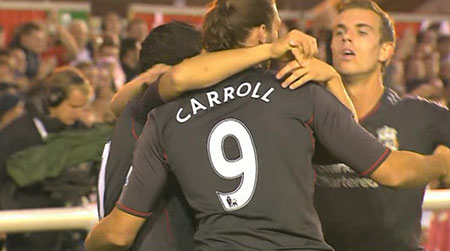