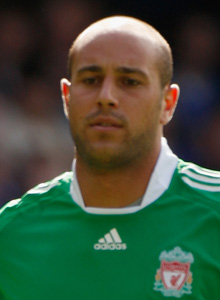 José was signed by Liverpool from Villarreal in July 2005. He is a penalty-saving specialist, having saved seven from nine kicks faced at Villarreal in the 2004/2005 season. Reina has taken over as goalkeeper in the place of European Cup hero Jerzy Dudek, and is seen as one of the most promising young goalkeepers in European football.

Before moving to Villarreal, Reina made a total of 29 appearances for Barcelona from 2000 - 2002.

On 17th August 2005 Pepe Reina made his debut for Spain in a friendly match against Uruguay. Spain won 2-0.

On 28th December 2005, this incredible run of clean sheets ended when Everton's James Beattie headed past Reina into the Liverpool net in Liverpool's 3-1 win over their Merseyside rivals.

On 5th February 2006, Reina, having made a clumsy challenge on Eidur Gudjohnsen moments earlier, was controversially sent-off in Liverpool's 2-0 defeat to Chelsea and banned for three matches for pushing Arjen Robben, who fell down somewhat easily.

Later in 2006 he celebrated his 50th appearance with a clean sheet and created a new record for a Liverpool keeper having conceded only 29 goals in his first 50 games, beating a record of 32 held by Ray Clemence from 1970/71. At the end of the season in the FA Cup Final a number of his errors allowed West Ham to take a 3-2 lead before Gerrard equalised late on before Reina redeemed himself with a last minute save in extra-time. He went on to save 3 out of 4 West Ham penalties helping Liverpool to win the FA Cup.

Again in the 2007 Champions League semi-final, a match against Chelsea, he was awarded man of the match after two fantastic saves from Frank Lampard. In the second leg penalty shootout Reina saved two out of the three kicks, the reds went through to the final after a 4-1 penalty shootout win.

In June 2008 he won his third consecutive Premiership golden glove award after keeping 18 clean sheets in the season. In the summer of 2008 he was part of the Spain squad which won the European Championships.

In 2009-2010 Season, Pepe was our shining star in a poor season, he won the golden glove in the Premier league again, and put in some notable performances despite a poor season.