Liverpool face Newcastle this afternoon for the first time since the Toon Army were relegated in the 2015-16 season.

It is the first time that the reds have travelled to St James's Park since Rafa Benitez took over towards the end of that relegation fated season.

The former Liverpool boss guided Newcastle back out of the Championship at the first attempt and the club have collected 9 points from their opening 6 games in the division.

The pre-match pleasantries from both Jurgen Klopp and Rafa Benitez towards each other are over and now it's time for us to try and move up to 4th - one place higher than following our win over Leicester last weekend.

The reds start the game in 7th place after the latest round of fixtures, with Watford collecting a point yesterday and Arsenal enjoying a home win against Brighton earlier this afternoon.

This is the final Premier League game before an international break.

It has not been a happy place for the reds to travel to in the past few years.

Liverpool have not won on their last 3 Premier League trips to Newcastle - and the last two visits have both ended in defeat (0-2 December 2015, 0-1 November 2014).

Overall the last 5 Premier League meetings at St James Park have recorded just 1 win for Liverpool and 3 wins for Newcastle.

That one Liverpool victory however was a monster 6-0 victory towards the end of the Luis Suarez inspired 2013-14 season.

The club captain, and Sunderland supporters, is making his 250th LFC appearance today, 221 of them being named in the starting XI.

The centre midfielder has scored 24 times for the reds in that time. 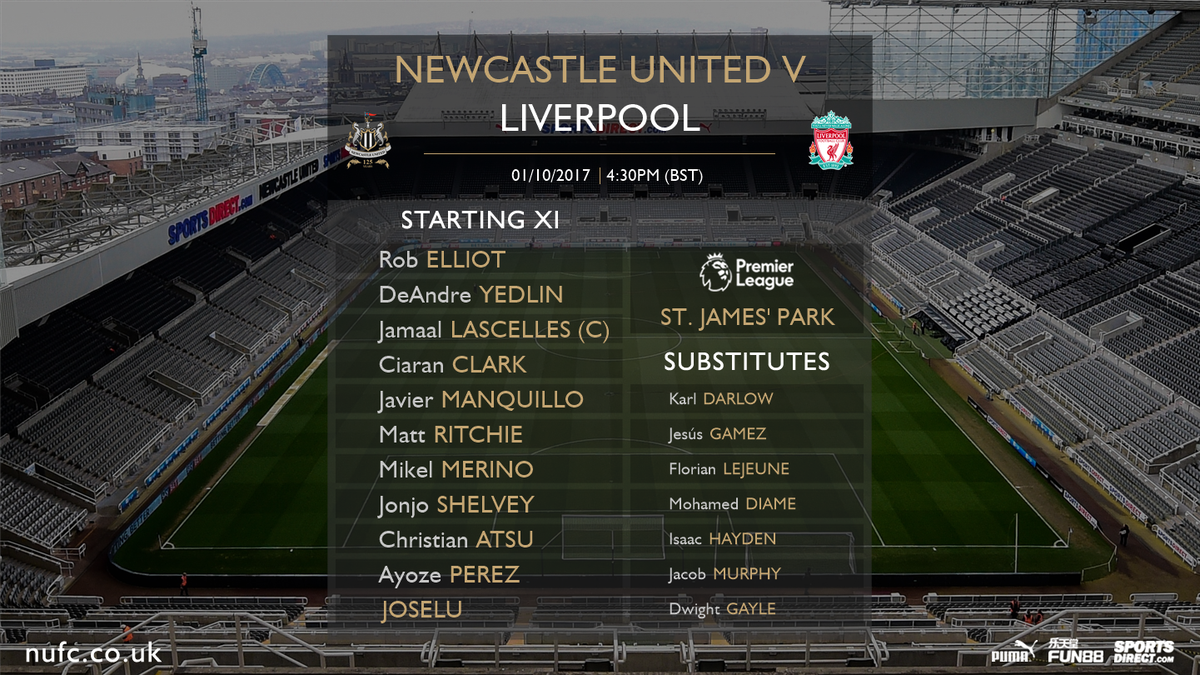 Klopp: 'It's time for Sturridge'

Some comments ahead of the game by Jurgen Klopp about Daniel Sturridge's starting place.

“He did well in the training sessions and he had a big impact in the last game when he came on. Now it’s time to let him off the leash from the beginning.”

Elsewhere in the Premier League

Loud boos at Goodison as Burnley make their best start to a Premier League season!

And Evertonians told us all summer that the Giant had awoken!

Klopp and Benitez shaking aheads as the players complete their final warm ups.

Minutes pplause ahead of kick off for former owner of Newcastle Freddy Shepherd.

Underway at Newcastle - come on you reds!

Quick attack from the reds

4' Block from Henderson and Salah is away - feeds Mane but Salah can't reach the return pass.  Newcastle keeper collects.

Attacking start from both sides.

Mignolet boots a ball straight out for a throw-in.

5' Shelvey goes for goal from outside the box - but it's straight at Mignolet.

At the other end Sturridge tries a neat lob over the keeper - but it goes wide.

10' Just gone a bit scrappy now.  Couple of mistakes creeping in from both sides.  Mane overhits his first touch when it looked like he was on a quick break.

12' In the battle of the Liverpool captain and former Liverpool midfielder - Jonjo Shelvey appears to be winning the battle so far.

He has time to twist and turn around Henderson who is left chasing shadows.

18' Henderson finds Gomez, and the youngster crosses the ball to the far post but it's a bit too powerful for Mane to lash the volley on target

20' Sturridge sets Salah off on a run - the Egyptian is powering down on goal and with Mane on his left he just overhits a touch and Jamaal Lascelles is there to make the interception.

Liverpool starting to see plenty of the ball now.

23' Wijnaldum flick from a corner hits the inside of the post, and Lovren can't fire in the follow up.  Ball comes out to Mane who puts it wide.

He picks the ball up, takes his time and is given space and boom - the Newcastle keeper can't get anywhere near.

Shelvey sends a ball right through Lovren and Matip to Joselu.  Matip goes for the tackle and it's sent past the onrushing Mignolet.  Nightmare.

1-1. Shelvey channeling his inner Alonso with this ball... #LFCpic.twitter.com/6lTsHhNXet

He's got a point

Might as well play with one centre back and put another attacker on.

Liverpool had scored with their first chance on target - surprise.

But then conceded a soft goal, that looked like it may go down as a Matip own goal - not so surprising.

Big second half ahead.

No half time substitutions for the reds who have 45 minutes to turn 1 point into 3.

48' Coutinho not moving entirely freely.  He has a thin bandage taped under his right knee and has been giving it a poke and prod a couple of times so far in this second half.

50' Liverpool fail to capitalise on a great chance.  It's a mistake by Clark, Sturridge collects and fires straight at the keeper - rebound to Salah who puts it over the crossbar.

55' Newcastle's Perez picks up a yellow card for dissent.  He kicked the ball away after ref Craig Pawson awarded Liverpool a free kick.

57' Gomez picks up a yellow card for a foul on Atsu. Gomez jumped to collect the ball and his thigh connected with the side of Atsu's head.

60' Approaching the hour mark here and no breakthrough looks in sight.  It surely won't be long before we see some players off the Liverpool bench.

73% possession in this second half from Liverpool, and 6 shots from the reds compared to Newcastle's 1, but only one on target.

The reds have not worked the Newcastle keeper hard enough in this second half and the clock is ticking down.

73' Firmino and Solanke are on for a disappointing Mane and Sturridge.

The final throw of the dice for Liverpool who have improved since Firmino and Solanke came on.

All Liverpool's starting front three have been replaced in this game.

Looks like it could be about to stretch to 5 games, 2 for Valencia, 1 for Chelsea and (almost) 2 for Newcastle.

Final change for Newcastle as Diame is on for Perez.

Liverpool all over the place but Mignolet can collect.

The third draw of the season for Liverpool who didn't create enough clear cut chances despite dominating the game.

They got the first goal but as ever just couldn't keep the back door shut.

Frustrating day for the reds

Well we're sorry we couldn't bring you a Liverpool victory today.  Another frustrating afternoon for Liverpool.

A wonderful Coutinho strike and then a defensive error.

Firmino and Solanke's subs came a bit too late - Sturridge didn't take his chance at all and Mane has not looked right since his red card ban.

After the international break the reds face Manchester United and Tottenham Hotspur so hopefully it will signal a return to form for the reds.

Thanks for joining us.