The reds still need to try and secure Champions League football for next season with Chelsea still with an outside hope of catching the reds.

Jurgen Klopp has called for an atmosphere to match the midweek game against Roma in which Liverpool won 5-2.

Sadio Mane misses out on a place in the squad through injury, but Mo Salah and Roberto Firmino are joined by Danny Ings up front.

At the back Joe Gomez and Ragnar Klavan come in, and Alberto Moreno replaces the injured Alex Oxlade-Chamberlain in midfield.

Stoke need to get a win to try and get them closer to avoiding relegation from the Premier League meaning there is plenty riding on this game.

Here's how Stoke line up

Ian Rush has the all-time season goalscoring record of 47 goals.  Mo Salah is currently on 43 in all competitions.

One more goal will give Mo Salah the stand-alone record number of Premier League goals in a season (38 games).

'We've come here without any fear.  I've had good times here but it's about our team and what we can do.

'We have to get after the game and be on the front foot.  We know it's a difficult game but I haven't set the team out to defend. 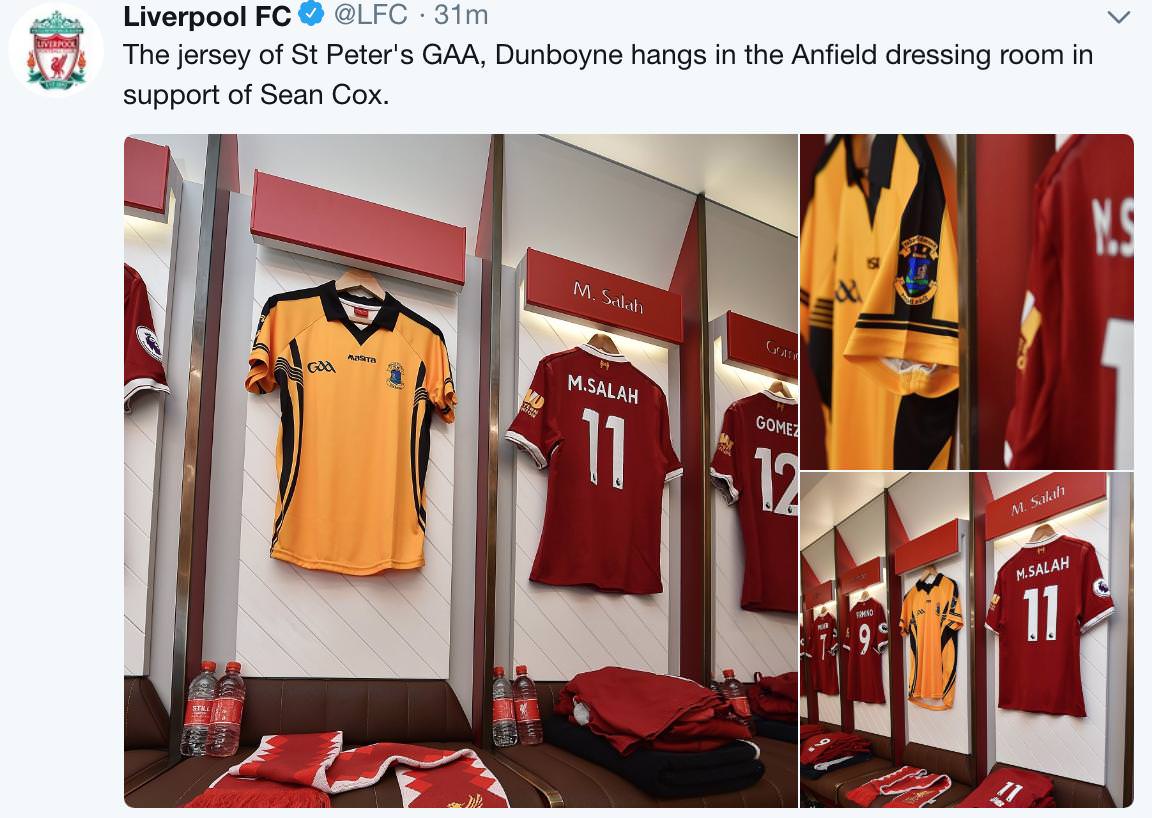 The two teams are out at Anfield.

Stoke with lots to play for, Liverpool possibly with an eye on the upcoming trip to Italy?

Stoke have won just one away game all season - they beat Watford 1-0.

They have shipped 23 goals in their 5 games away at the other teams in the top six.

We are underway at Anfield!

Come on you reds!

Liverpool are lined up in our traditional 4-3-3.

Gomez and Moreno are right and left back.

5' Great cross from Moreno, Firmino controls and threads it through into the area and it's Trent Alexander-Arnold running onto the ball.

Was he brought down by the keeper? The referee says no.

6' Henderson pings the ball through - Salah on a one on one, he lifts it over the keeper but it's gone wide.

11' Ball sent in to Liverpool and it's just behind Salah - he collects it but turns and hits a hopeful shot that is easily dealt with.

A fairly open game so far.

15' Couple of overhit passes by Joe Gomez down that right wing - giving the Liverpool forwards too much to do.

Maybe he's had a few too many 'leg days' at the gym.

27' Heavy going for the reds in the last ten minutes or so.

Final balls just not coming off and Gomez and Moreno looking a little bit off the pace.

28' Firmino more good work - sets up Wijnaldum who drills a shot from the edge of the area but it's just wide of Butland's inside post.

33' Butland makes a complete mess of a clearance, Salah picks it up and is immediately body-checked to stop him.

He whips it in left footed from the corner of the box and it ripples into the side-netting.

36' Bad foul from Peter Crouch on Roberto Firmino and the former Liverpool man gets the games first yellow card.

41' Great work from Liverpool by Firmino - couple of rebounds and Danny Ings drills it into the net but it's offside.

43' Henderson gets a kick on the ankle from Shaqiri and is currently down.

They've got a bag of ice out for Henderson's ankle.  Didn't seem to be a malicious challenge - just an accidental kick in the ankle bone.

Looks like he's going to be okay to carry on for now.

Half time at Anfield

Couple of gilt edged chances for the reds and a disallowed goal but it remains goalless.

Henderson took a kick on the ankle and Trent Alexander-Arnold has been gesturing to the bench about a possible thigh injury.

Much to do second half.

We're back underway.  Liverpool kicking towards the Kop.

Can the reds improve to get the 3 points needed

50' Couple of early injuries in this second half.  Bruno Martins Indi down now shortly after Joe Allen went down.

This could be the first sub of the game coming up as Indi seems to have some kind of muscle injury.

52' Ramadan Sobhi comes on for Bruno Martins Indi for Stoke

54' Substitute Sobhi does well, works his way inside the penalty area but it's a tight angle and his shot is straight into the gloves of Loris Karius.

59' Gomez with a poor mistake that allows Stoke to get in behind, but then Gomez does well to get back and block a Sobhi shot.

62' Groans inside Anfield as Liverpool are again forced backwards.  Salah being tightly marked by Pieters and he's got his hands on him there at the edge of the box.

Stoke have conceded 32 goals this season in the last 30 minutes of a game.

65' Liverpool bring on Milner and Clyne for Alexander-Arnold and Danny Ings.  Stoke take off Peter Crouch for Darren Fletcher.

67' Moreno shot from just outside the box.  Wide of goal.

75' Great whipped in cross with pace by Moreno - Zouma manages to put it behind for a corner.

And another corner for LFC...

Three quick corners there for Liverpool but nowhere near enough threat from the reds.

78' Surging run from Moreno - Badou Ndiaye comes in for the tackle and its left both players down and in need of treatment.

80' Will Stoke open up a bit in this second half and try and get a winner?

They're in the reds final third now.

85' Two more corners for Liverpool wasted with the second ending in an offside against Liverpool.

Just not Liverpool's day this - looks like more points dropped.

87' Big shout for handball there not given to Liverpool.

87' Virgil van Dijk handed a yellow card for a foul.

90+3 Henderson shot deflected for a corner.

Ball eventually arrives on Wijnaldum's head from a cross but it goes over.

Liverpool 9 points ahead of Chelsea with a goal difference 18 better.  Chelsea have two games in hand and play Liverpool at Stamford Bridge next weekend.

The reds playing a dangerous game in qualifying for the Champions League next season with 3 draws in the last 4 games.  One at Everton, and two against the two teams at the bottom of the league West Brom and Stoke.

Some very poor league results there.

'Second half we created enough to win the game.  We should have won it comfortably I thought.  (On penalty) It was a blatant penalty.  A poor decision from the referee and the linesman.

The 125th anniversary kit however was unbeaten at Anfield in the Premier League. 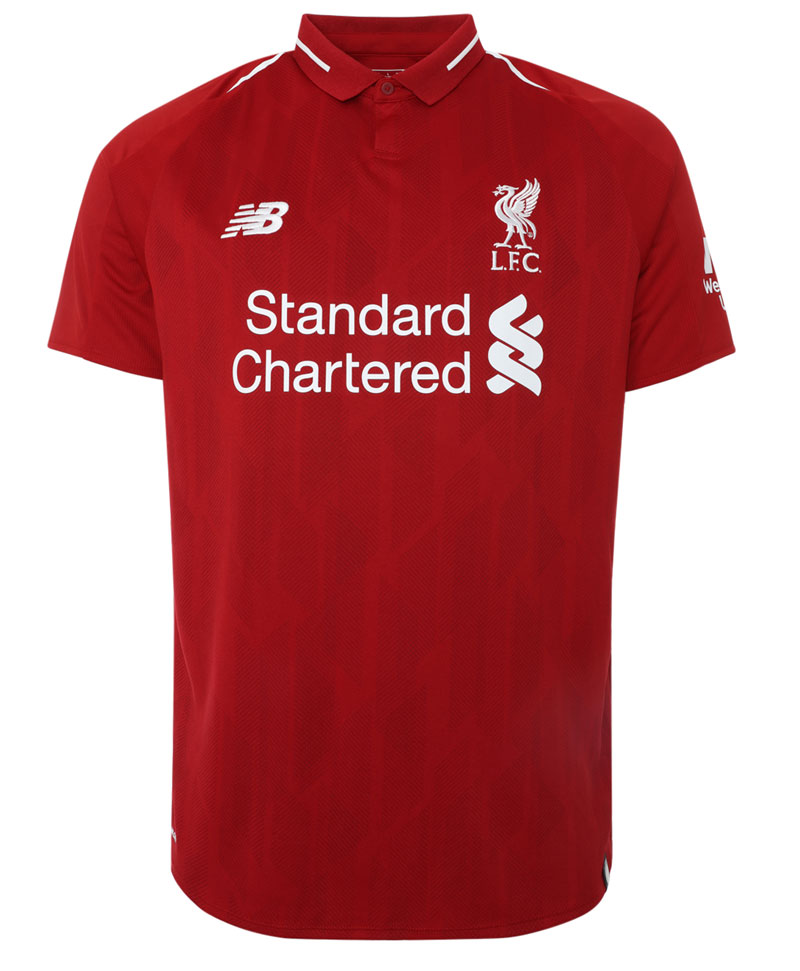