It is the third day of this extended Premier League opening weekend, and the reds finally get their season underway at home.

With four new summer signings all likely to be named in today's 18 man squad - the reds will be hoping to start the season with all three points.  Spurs, Chelsea and Man Utd all gained maximum points in a variety of displays.  Man City and Arsenal kick off their season later today.

After the disappointment of the European Cup final in Kiev at the end of May, Klopp has added some significant faces to the squad.

The Naby Keita deal that was arranged last summer has been concluded, whilst Brazilian's Alisson Becker and Fabinho join the side and Xherdan Shaqiri had his contract clause activated after Stoke were relegated.

Emre Can departed Liverpool on a free transfer to Juventus, whilst Danny Ings is the only other major departure.  He has gone to Southampton on an initial loan before a £20M transfer next summer.

Dejan Lovren will not be involved after being the last returning player due to his World Cup Final involvement.  Jordan Henderson and Trent Alexander Arnold both have been back for marginally longer than the Croatian.

West Ham too have made plenty of summer signings with new manager Manuel Pellegrini in charge and they too will be aiming for an ambitious season and trying to get close to a return to European football.

They have completed signings like French centre-back Issa Diop, Jack Wilshere, Andriy Yarmolenko from Dortmund, Felipe Anderson from Lazio, keeper Fabianski, Carlos Sanchez and Lucas Perez for a combined total of around £90M.

First game of the season

After the distraction of the World Cup over the summer, and a healthy pre-season for Liverpool - the time has finally arrived.

Liverpool welcome West Ham United with at least two of the club's new signings expected to make their official debuts.

Goalkeeper Alisson Becker and midfielder Naby Keita are both expected to start for the reds, while both Fabinho and Shaqiri expected to be named on the bench.

LFC ended last season a huge 25 points behind champions Man City last season in 4th place, they will be hoping to make significant inroads into that huge gap starting today.

In case you missed it, Klopp likened Liverpool's attempt to overtake Man City to the Rocky IV film.

'We are Rocky Balboa, not Ivan Drago', the reds boss said in his pre-match press conference.

You can catch up on that here 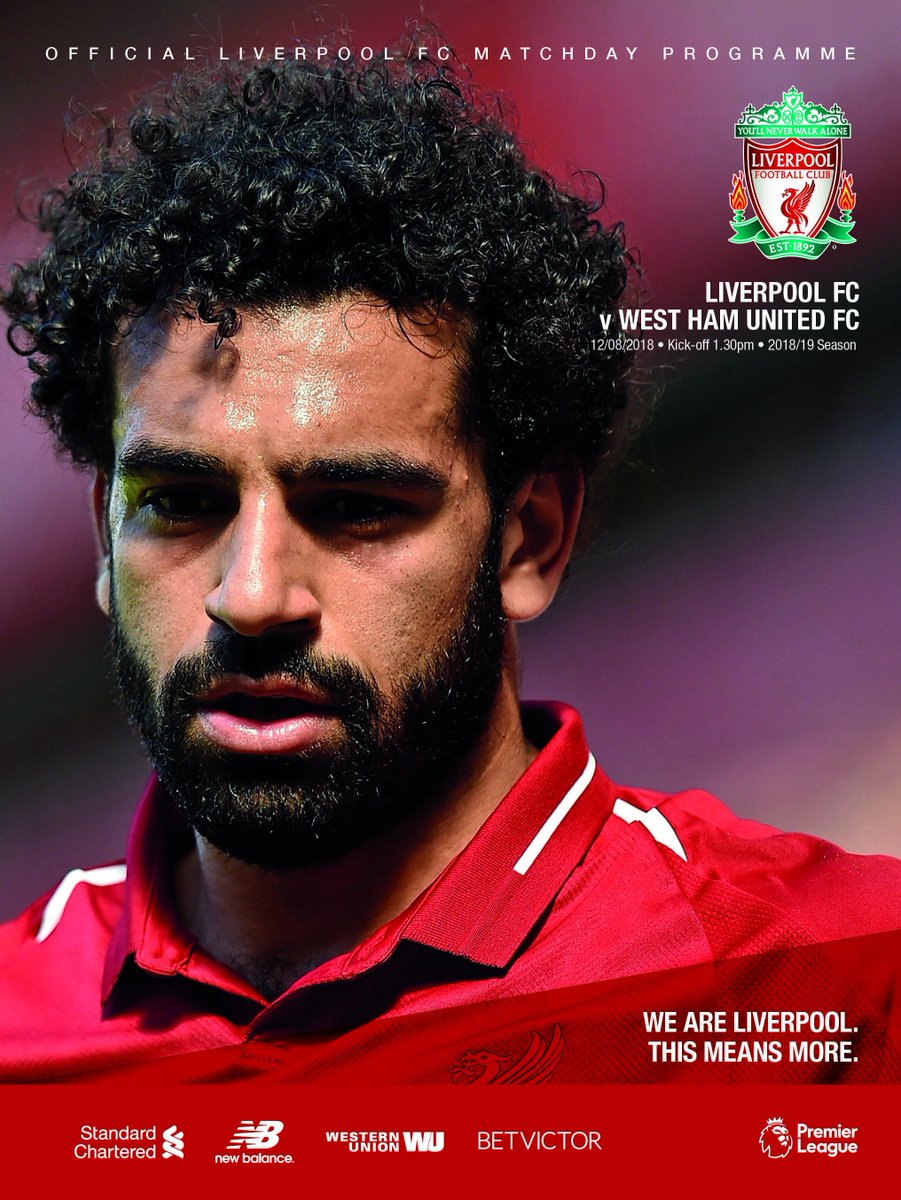 West Ham were one of 7 Premier League teams that Liverpool beat both home and away last year.

And the reds posted two identical 4-1 scorelines against the hammers.

In November at Anfield Emre Can, Mo Salah, Bobby Firmino and Sadio Mane grabbed the goals.  Whilst at West Ham's London Stadium in February Mo Salah opened and ended the scoring with Joel Matip and Oxlade-Chamberlain adding the other two goals.

But West Ham have caused Klopp some problems early in his time at Liverpool.  In 2015/16 West Ham completed the double over Liverpool - the reds not even managing a goal in the two games.  West Ham also knocked the reds out of the FA Cup that season.

New signing Fabinho may or may not be involved today due to illness, but he has been speaking to Sky Sports. 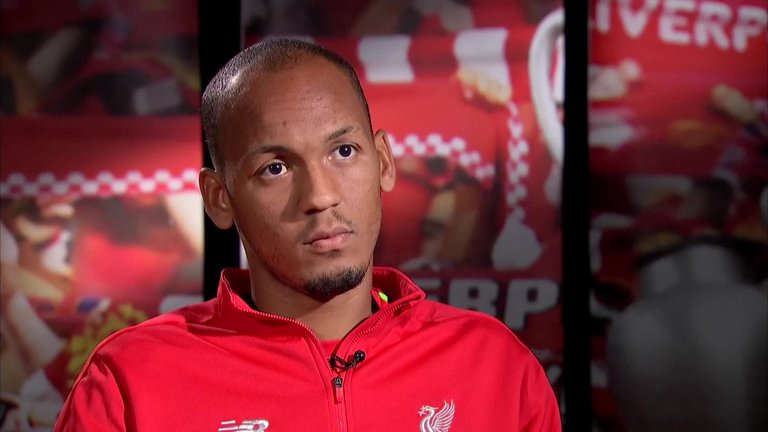 "I'd been at Monaco for many years, and I believe it was time for a change. I wanted to move to a massive club with ambition that are fighting for titles. It was between the English league and the Spanish league.

"This is a massive club, and if this is not the best league in the world, it's one of the two biggest championships in the world.

"We are looking very strong. The preparations have been great and looking at all the elements, not just the first team, we have a great squad. We will be fighting for the title."

Here's your first LFC team of the season

So two debuts for Liverpool's starting XI, but West Ham have got five new players in their starting line up.

Keita just about ahead of Henderson

Klopp seems to be suggesting that he wanted to pick Henderson rather than Keita in today's starting XI.

“Naby was here for all six weeks of the pre-season, like Fabinho. Shaqiri came later. Both are in the squad, that’s very important for us.

“Usually in the past, I think I always played with the team of last year at the beginning of the season but Hendo came back a bit late and stuff like that, so it makes sense.

“And they played really well together in midfield, for example against Napoli. Gini, Naby and Millie have worked together since we started pre-season, so that’s the midfield we wanted to have.

Last August he did introduce Oxlade-Chamberlain very slowly to the team as he adjusted to Liverpool's way of playing.

West Ham win the toss.  Liverpool kicking towards the Kop in the first half.

Doesn't usually end well for opposition teams when they do that.

2' Quick start from the reds.  Salah tries to thread a through ball but it comes off the back of Firmino's heel.

James Milner is captain today and he has a big bandage around his head from his 15-stitch head wound he suffered in the friendly v Napoli last weekend.

5' A first touch from Alisson after a backpass from Robertson, there's an attacker running at him, but he passes it back to Robertson with confidence.

6' Inswinging cross from Alexander Arnold and Fabianski manages to punch it clear and away from danger.

8' Tidy move beginning with a 1-2 from Naby Keita.  He finds Salah, who threads it through to Firmino in the area who manages to get stopped by Antonio who was tracking back.

Maybe should have shot straight away.

18' Great cross from Milner - both Salah and Firmino in there but neither get a touch on it.  They were at the edge of the 6 yard box.  Best chance of the game so far.

Brilliant move from Keita - he feeds Robertson down the left and his cross is knocked in by Mohammed Salah.  Goal number one of the season.

23' Liverpool keeper there waiting until two West Ham players were chasing him down before passing - taking them out of the game and Liverpool are on the attack again.

Free kick to the reds about 30 yards out.

And Alexander-Arnold aiming to the top left hand corner and Fabianski tips it behind for a corner...

25' Naby Keita, with the ball glued to his feet, tries to go through about 5 men inside the penalty area.

Ball breaks to Wijnaldum and he puts it narrowly wide.

27' Corner for West Ham, Balbuena jumps highest and heads at goal but Alisson catches it.  Little bit of sloppiness there from the reds.

31' Some anger at referee Anthony Taylor over a potential LFC penalty shout for handball.  Replays suggest the West Ham defender played the ball with the top of his chest.

It has been a bright start to the opening 30 minutes of Liverpool's season.

45' Headed forward ball from Mane, Salah is on the way but Fabianski comes out to get it.

Corner for West Ham at the very end of this half...

Salah crosses, blocked, Robertson crosses and Milner at the back post sends it across the line and Mane gets his first goal of the season! 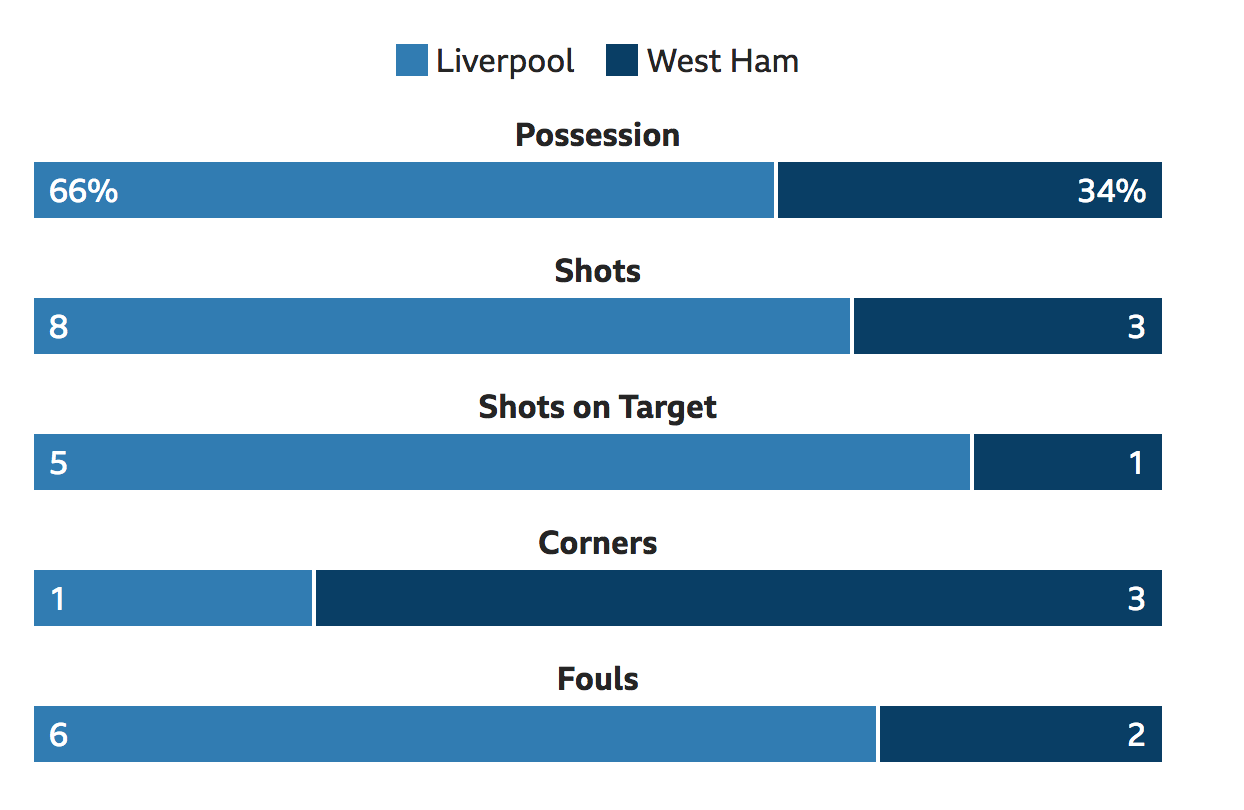 One change at half time for West Ham.

Off Declan Rice - On Robert Snodgrass.

52' Yellow card for Antonio for a foul on Trent AA.

53' This looks done. Sadio Mane picks up the pass from Firmino inside the area, he's possibly offside, but he fires it into the net.

61' An hour gone and Liverpool are in cruise control here.  Naby Keita has had a terrific debut, but the likes of Robertson and Milner have also been excellent.

Hard to fault any player in red (or the keeper in yellow).

63' Another whipped in ball by Trent AA.  This time the officials correctly spot that Wijnaldum is offside.

67' Mark Noble and Jack Wilshere both laying on the ground after a Liverpool free kick.

Noble took a ball in the stomach, Wilshere took a possibly more painful one in the genitals.

The game continues.  Final change for West Ham.  Arnautovic off and new signing Andriy Yarmolenko on.

Keita is now left of the front three, Mane switches to the right and Salah is through the middle.

78' Let off for West Ham, Salah and Robertson combining again and Robertson's ball across the face of the goal goes begging.

Liverpool have notched down a few gears but still look well capable of adding a fourth goal.

82' Two goal Sadio Mane heads off and on comes Xherdan Shaqiri for his debut.

88' Mo Salah makes way with warm applause as Daniel Sturridge heads on to the pitch.

88' His first touch!! Daniel Sturridge taps in from the back post after a James Milner corner.  Wonderful for Danny Studge - brilliant.

Shaqiri almost through at the end but flagged offside.

The reds go top of the league.

Milner: 'We can improve, it's our first game of the season.  It was always going to be a tough game but it was a good start.'

'Important to get off to a good start and kick on from there.'

Great start from the reds.