The Champions League returns to Anfield for 2019 with Liverpool and Bayern Munich battling out for a place in the Quarter Final.

The European giants of England and Germany meet in the heavyweight clash between two sides each with five European Cups in their trophy cabinets.

Liverpool are without Virgil van Dijk through a European suspension and will also be casting a cursory glance in the direction of the weekend's Premier League game - an opportunity for Liverpool to return to the top of the Premier League.

Over in Germany, Bayern Munich are also currently occupying second spot - but they have a 3 point margin to leaders Dortmund.

Bayern are in red hot form back in Germany after a stuttering start - collecting 21 from their last 24 points in the league.

There has only been one European Cup clash between these two at Anfield before - back in 1980/81 when a European Cup Semi Final 1st Leg ended 0-0.  Liverpool drew the away leg 1-1 and eventually went on to win the 1981 European Cup.

Will there be goals tonight? Most likely.  And can Liverpool keep a clean sheet without van Dijk against an in-form Bayern? Hmm...

Ahead of the game

Dejan Lovren is facing a late test on his hamstring.  It could mean that Fabinho partners Matip in Liverpool's defence.

Liverpool are aiming to stretch their European undefeated games at Anfield to 20 tonight.  The last defeat was against Real Madrid in October 2014 when Brendan Rodgers' post-Suarez team were easily beaten 3-0.

Robert Lewandowski is this seasons goal machine in the Champions League - he has 8 goals and is looking to score in his fifth consecutive game.

Bayern also have 8 goals from set pieces - with 5 arriving from corners.

For Liverpool, Sadio Mane has got himself back in form in recent weeks - and he scored seven goals in Liverpool's seven knockout games in last season's competition. 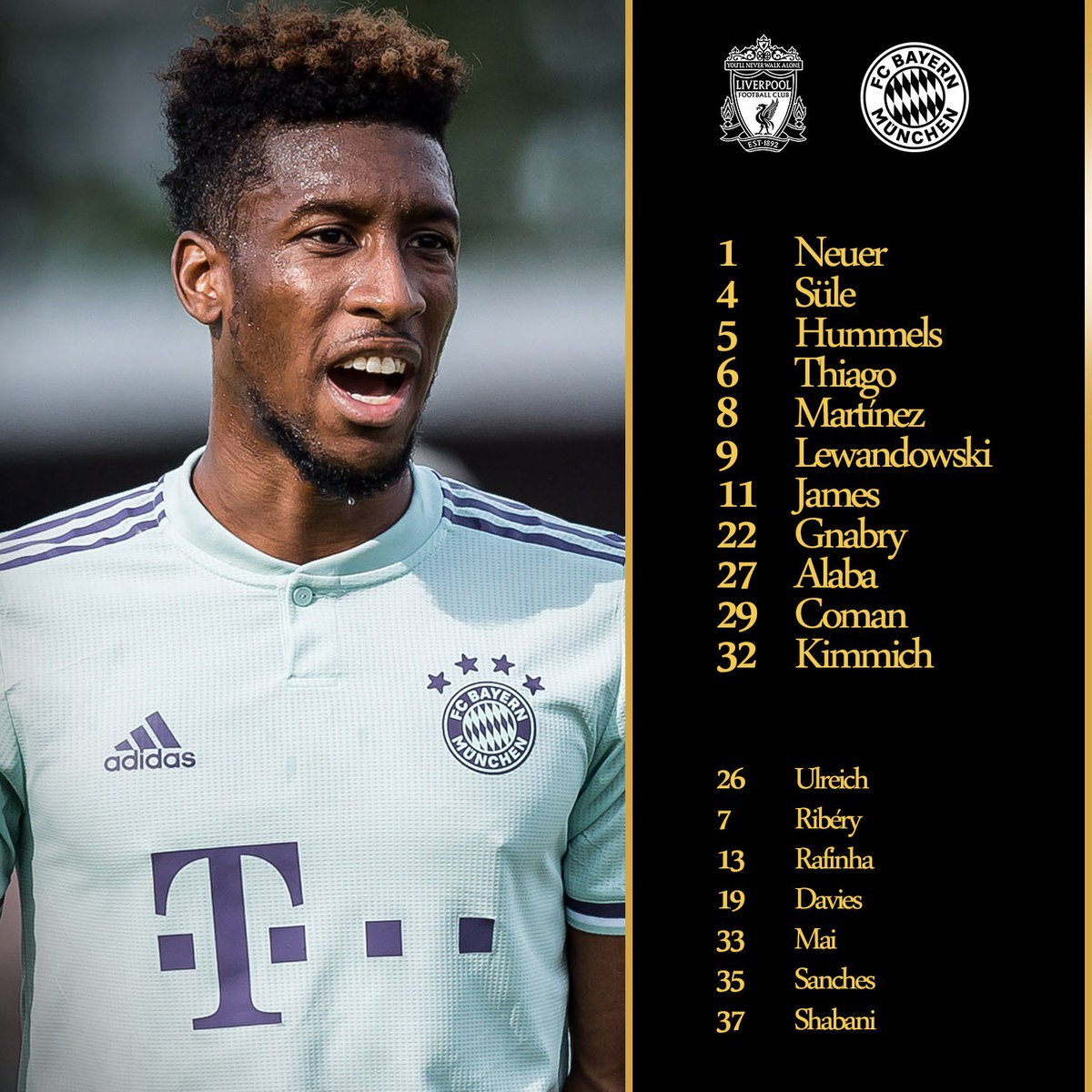 Don't forget VAR (Video Assistant Ref) is in use at Anfield tonight.

It features in all CL games from the group stage onwards.

That's the Liverpool players heading back down the tunnel - attention turns to final preparations before the game.

Jurgen Klopp has been on the pitch grimacing, smiling and a few handshakes here and there for some of the Bayern players.

Kick off is approaching.

It's a great YNWA from the Liverpool fans at Anfield.

Something special about this competition.

7' Liverpool allowing Bayern to have the ball quite deep into the reds half there.

Loud boos from a very fired up Anfield crowd tonight.  Reds back on the attack - Sadio Mane flagged for offside.

13' Great ball over the top from Henderson - Salah is in but he was stretching and can't get any power on the shot.

13' Straight down the other end and it's a good save by Alisson from Lewandowski.

15' Keita finds Sadio Mane - Andy Robertson is free but Mane takes the ball forward and drills it wide of the Anfield Road goal.

... And now Kingsley Coman smashes the ball at the side netting.

22' A poor header back there by Robertson but it's an equally poor touch from Gnabry who can't make the best of that opportunity he was gifted.

Half way through the first half.  Bayern playing well - plenty of chances for both sides.

28' Joshua Kimmich collects the game's first yellow for a foul on Mane.  He will miss the second leg.

Referee heads over to the touchline to talk to Nico Kovac, the Bayern boss.

Getting a little bit excitable is the Croatian.

Firmino - to Keita and it falls to Mane who puts it wide.  Keita's shot deflected off the arm of a Bayern defender there as well.

Either way - chance wasted by Mane.

38' And it's Keita involved again who flicks the ball into the area - Sadio Mane attempts the overhead kick inside the box..... and it's wide.

He's had a few chances tonight.

Liverpool applying the pressure here as we approach half time.

Great chance there involving Firmino, Fabinho and Joel Matip.  And I'm still not sure how it's not gone in! 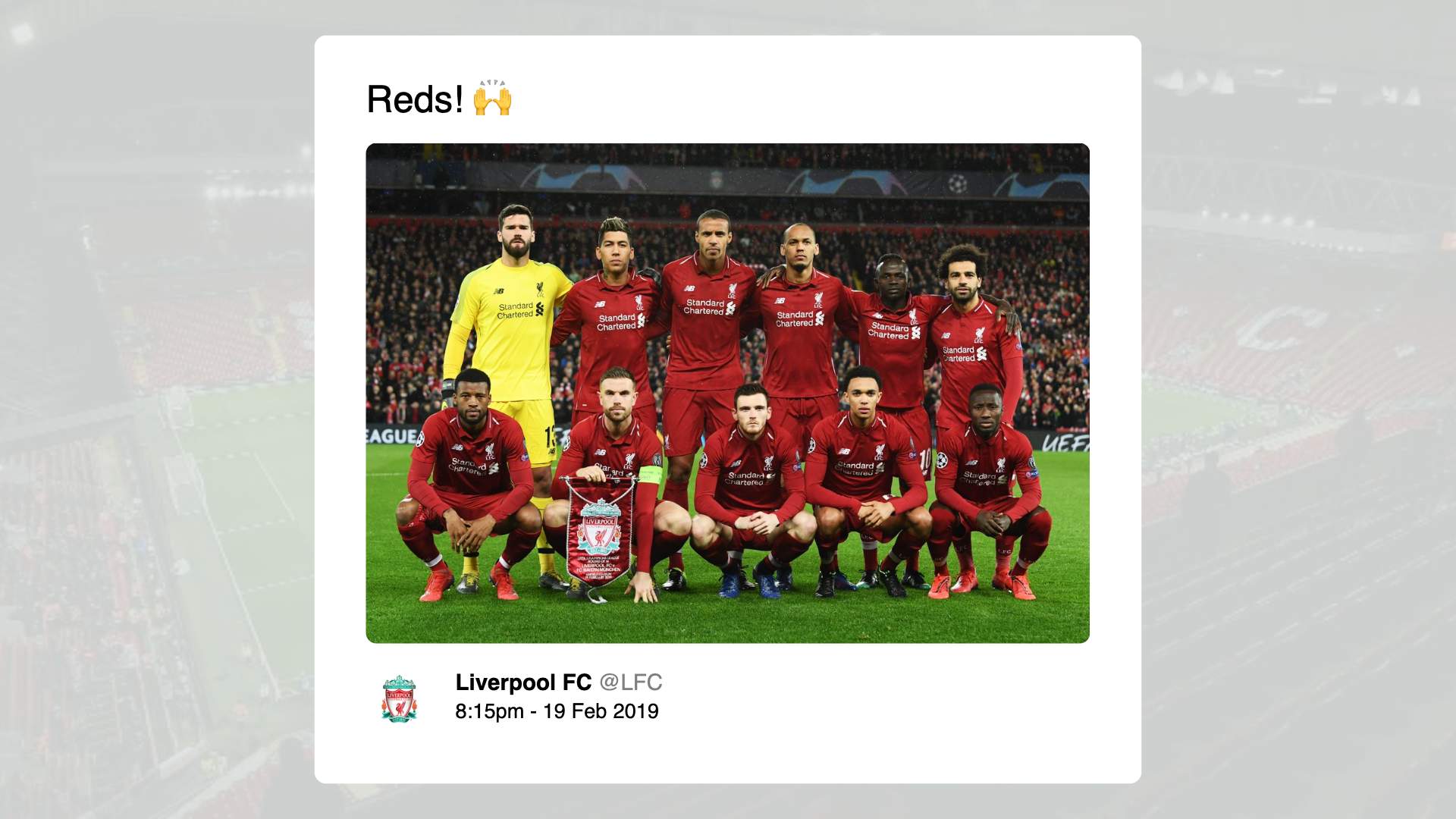 Two good teams who have cancelled each other out so far.  LFC have had the best chances of the game however.  Keita looks like he has found his Liverpool groove and Mane, on another day, could have had about three.

We're back underway.  Liverpool kicking towards the Kop.

54' Opportunity there, ball comes off Robertson and Salah can't control as the ball flashes over and out for a goal kick.

56' Booking for Jordan Henderson there for a foul on the half-way line. 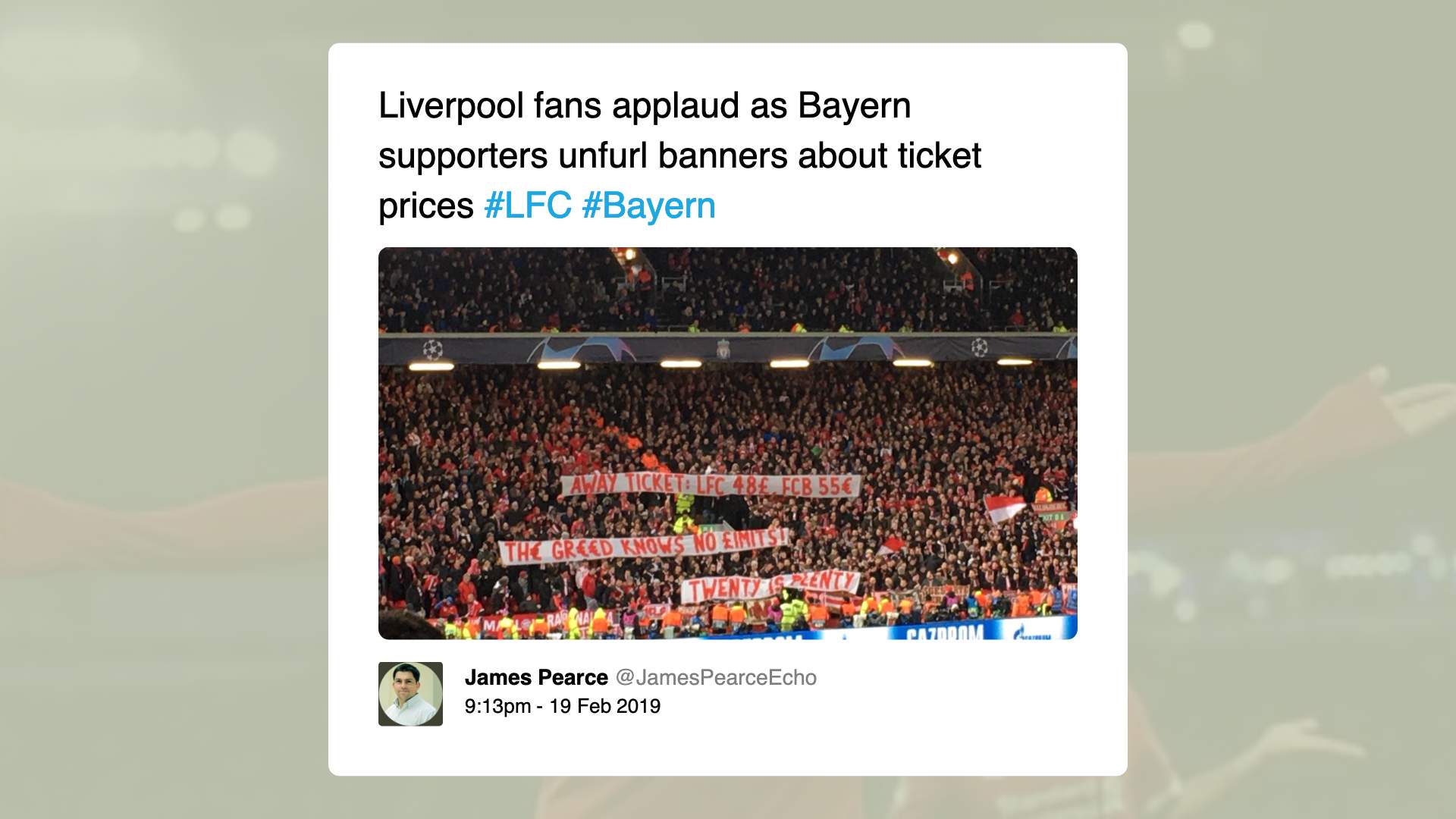 Not been as many clear cut chances so far in this half.  Mane lively, Keita busy, Henderson having a fine game and even Fabinho and Matip are doing sterling work in the reds central defence.

Both sides have their subs warming up.

64' Joel Matip aims to pass it out to the wing and he absolutely leathers it out for a throw-in.

No subs yet.  Henderson did take a kick on the ankle a few minutes back but he's back involved and seems to be moving okay.  Bruise in the morning job.

76' Naby Keita replaced by James Milner.  Divock Origi is on for Roberto Firmino.

81' He comes on to replace Kingsley Coman for the German side.

82' Ball falls to the edge of the Bayern box - but it's fallen to Joel Matip and he doesn't connect well and it spoons away to the right.

Great position - probably not the man for that chance to fall to.

85' It's a header from the 6 yard box by Sadio Mane and Neuer has to react quickly to push that away for a corner.

88' Renato Sanches is on for James Rodriguez.

It's the third consecutive 0-0 between Liverpool and Bayern at Anfield stretching back almost 50 years!

Fabinho and Matip get a clean sheet.

Three weeks until the second leg of this tie.

Jordan Henderson not too downbeat about the result:

'Would we have preferred to have scored a couple of goals? Of course.  But we believe we can go there and get a result.'

The second leg is Wednesday 13th March at 8pm GMT at the Allianz Arena.

Liverpool have the little matter of four Premier League games to focus on before then including Manchester United (A) this Sunday afternoon and Everton (A) on the 3rd March.

Thanks for joining us and lets hope Liverpool have been storing some goals for this coming weekend!

'First half it was not a day were we clicked in the first minute.  Bayern is very strong.  We made our life a bit more difficult with our last pass - I don't know how often, 10, 11 or 12 times we gave them the ball back.  It doesn't make a lot of sense.

'We can play better.  We will play better.  And I see the other game was 0-0 (Barcelona playing away).  Not a great Champions League night.

7' Its Origi with the opener!

23' Robertson drills a shot at Ter Stegen. Beaten away.