The reds, top seeds in the tournament after winning a sixth European title in Madrid, are once again paired with Napoli in the group stages.

Arguably this is the reds toughest game in this years group stage, away in Italy against the team drawn from the second pot.

Liverpool lost three of their group stage games last year, and Napoli away was one of those.  An insipid performance from the reds and 1-0 to Napoli on the night flattered the reds - it probably should have been worse.

In the reverse fixture at Anfield the reds held on to a crucial win that sent the men from Naples home from the competition and placed the reds into the last 16.  The rest of the tournament will live long in the memory of Kopites everywhere.

So tonight we return to the Champions League.

A draw would arguably be a good result tonight but can the reds do better?  Or will Napoli gain some revenge for last years group stage exit?

Can the reds reach a 3rd consecutive Champions League final, and a 4th European final under Jurgen Klopp? 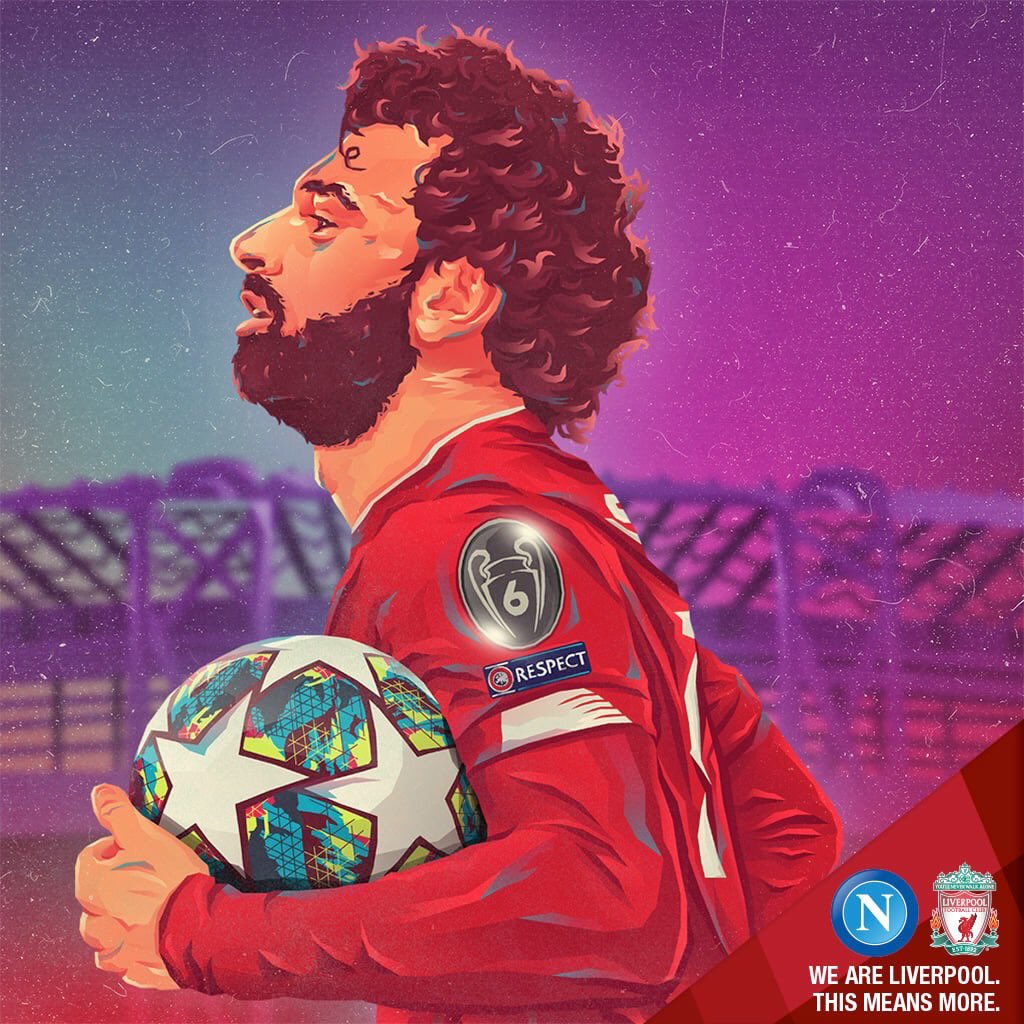 "Last year, we learned from one game to the next game and we have to use that experience, because if we don't defend with all we have then we have no chance against Napoli. They are so strong," he added.

"They are stubborn in a positive way. They play football, they break lines, they have good counter-attacks, they are creative. I enjoy it when I analyse Napoli. I like to watch them."

Andy Robertson has been declared fit to be involved in tonight's clash.

There were concerns after he picked up a knock in the weekend victory over Newcastle United.

Inter Milan and Slavia Prague is goalless.  Lyon are losing 1-0 at home to Zenit St Petersburg.

Elsewhere tonight there are five other games including Chelsea hosting Valencia and Barcelona travelling to Borussia Dortmund.

Three changes for the reds.

Dries Mertens who scored two goals at the weekend is one of the many familiar names facing the reds tonight.

Klopp after the line-ups are revealed

“We need to be intense tonight and for that we need some fresh legs.

“We have that now in two positions in a very decisive area of the pitch. That’s clear. That was the plan for the line-up.”

“Now we know the line-up of the opponent – very offensive, they brought pretty much every offensive-minded player.

Footballers certainly know how to promote themselves on social media these days...

Under the lights, Champions League music.

You love to see it.

Slight delay for an earpiece check for the ref.

2' Good ball through from Henderson and Salah puts the afterburners on.

The reds win a corner.

Now Napoli have their first corner of the night.

It was sent in to Koulibaly but van Dijk cleared.

Two absolute belters from Fabian Ruiz, both stopped by Adrian and then it's headed in from the rebound.

11' There's a ball over the top straight into the Liverpool defence.

Trent Alexander-Arnold is alert though, and he makes a crucial interception.  Excellent defending from the reds youngster.

16' Liverpool clear another corner.  Goalscorer Dries Mertens appears to be on corner duty.

Then another chance comes in, Fabian Ruiz at the back post but he drills it towards van Dijk at the edge of the 6 yard box.

16' van Dijk cuts out a ball that was coming into the area towards Hirving Lozano.

21' Alex Meret makes his first save of the game.  Ball sent into Mane in the area, he takes the ball down and then fires at an angle straight at the keeper.

22' Salah beats Koulibaly, and then the ball rebounds to Mane.  He feeds Milner who drills over the crossbar.

25' Long ball down the touchline.  Robertson stretches but it goes past him.  Dries Mertens has the ball, hang on here comes van Dijk to put it out for a corner.

26' Mertens with the corner.

Another cross comes in and this time Joel Matip heads behind.

A reminder of how bad this away game was last year.

0 - Liverpool didn’t attempt a single shot on target in their 0-1 UEFA Champions League Group Stage defeat away at Napoli last season. This is the only time in their last 74 games in the competition that they haven’t attempted one. Anomaly. pic.twitter.com/ncq3hV6Y5Y

28' Trent Alexander-Arnold busts a gut to get another crucial interception in on Dries Mertens.

Salzburg making an early start to go top of our group.

They lead 3-0 against Genk.

37' Salah worms his way across the box and unleashes a shot, but he drags it wide.

The Egyptian King has had a fair bit of the ball in that final third.

41' Couple of interesting collisions now in this game.

Lozano loses a shin pad after a coming together with van Dijk, and Mane is floored after a stray hand from Koulibaly. 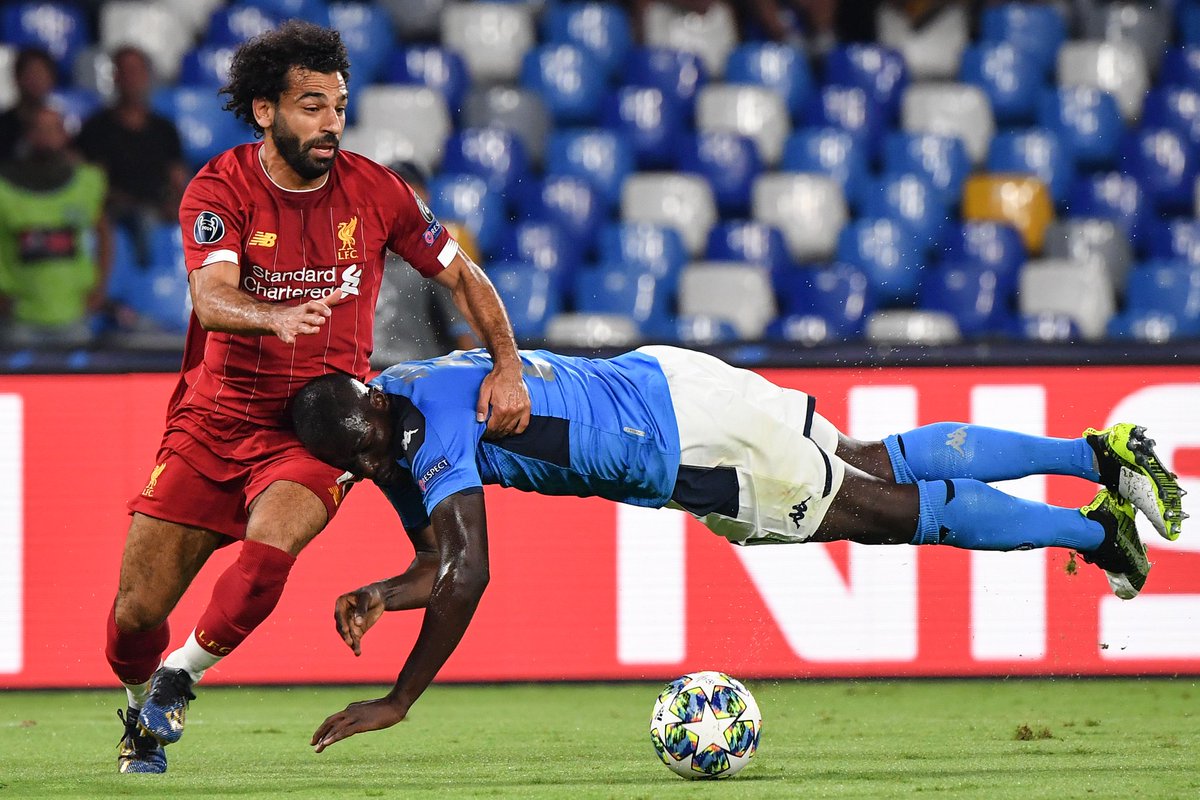 43' Firmino to Mane.  He sends a ball forward to James Milner who tries to play the ball across to Salah who would have scored.

Defender gets a foot on it.

From the LFC corner, Firmino heads it narrowly wide from the penalty spot.

An entertaining and fairly even half.  Liverpool arguably with the better chances, although Adrian probably had slightly more saves to make.

The reds end the half stronger.

No half time changes for either side.

We're back on it.

49' Ball crossed over van Dijk, Dries Mertens with the header.

Brilliant save by Adrian.

54' Napoli appear for a handball, VAR checks it.  Replays show that Trent Alexander-Arnold's arm was by his side when the ball was lashed at him.

55' Mane powers forward, but it's a terrible pass to Salah.

57' Andy Robertson with the first caution of the game after a foul on Callejon.

60' Firmino lobs a ball through, Mane and Salah both occupying the same space and Salah can't get his shot away.

Game is getting stretched with a half hour left.

Adrian's save from earlier

One of the finest saves you’ll see from Adrian: pic.twitter.com/SoMJC9Qedc

61' Milner picks up a yellow card.  Not a bad challenge, more an accumulation of tackles.

62' Firmino dwells on the ball at the edge of the area and it gives Koulibaly the chance to tackle.

65' Big save by Alex Meret who tips that Salah shot around the post.

69' Hirving Lozano heads off to be replaced by another new signing, Fernando Llorente the former Spurs player who played a part of the Champions League final.

74' An excellent spell of LFC possession ends with Sadio Mane having a shot.  He can't really get a clean hit on it and Meret gets down low to smother it.

80' Unless this is a classic rope-a-dope, I'd say that Napoli's players are tiring in these final stages.

Robertson with a sloppy challenge, it goes to VAR.  Doesn't look a lot in it but penalty given.

Adrian gets a hand to Mertens penalty but there's too much power and Napoli are 1-0 up.  Somewhat against the run of play.

90+2' Another late error.  And Fernando Llorente gets the goal that seals Napoli's win.  He sneaks in between Robertson and Adrian and puts it past the keeper.

A good game.  A decent performance from the reds and then a strange penalty award turned the game around.

Mertens put away the controversial VAR decision and then in the final moments, Llorente nicked in to give them an extra goal cushion.

Liverpool have now lost, astonishingly, 6 of their last 8 European away group games.

Also Liverpool, have reached the final in each of their last 3 European campaigns.

Disappointing, but 15 points still to play for.

'First half I still felt we played some good stuff.  It was just that final bit missing.

'Then obviously the mistakes for the goals that we need to improve on.

'We can be better of course.  We will move forward and try and react in the right way. 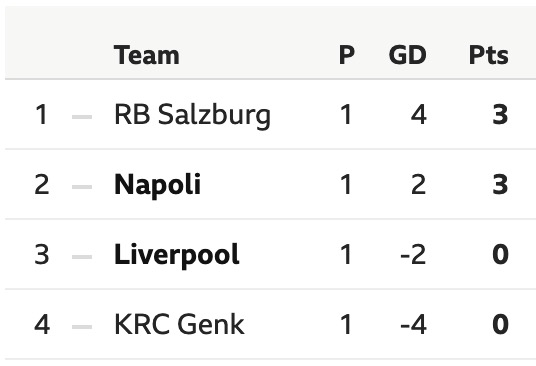