Friday night Premier League action for Liverpool as they travel to the south coast, bringing a collection of old faces back to the St Mary's stadium.

Southampton do have Danny Ings amongst their ranks, but as he is still technically a Liverpool player and on loan he cannot feature for the Saints tonight.

Although Virgil van Dijk ended Sunday's game against Spurs with an ankle problem he is set to be included in the Liverpool team.

Joe Gomez and Alex Oxlade-Chamberlain are nearing a return to action but this game may come too soon for them.

Southampton's Austrian boss Ralph Hasenhüttl has been likened to Jurgen Klopp in terms of temperament, and the two managers are less than 2 months apart in age.  He has more than stabilised the ship after taking over from Mark Hughes at the start of December.  He has seven wins and five draws in the 18 games since he arrived, and have won their last two games.  They are looking to win a third consecutive game for the first time in 3 years.

It's another must win for the reds.

In the past 18 months, Liverpool's record has been good against Southampton.  Three wins, 8 goals scored and none conceded.

Delve a little further back however and Liverpool failed to win any of the five games before that.

In the last 5 meetings at St Mary's the reds have won 2, lost 2 and drawn one.

That's Fabinho and Keita in to replace Henderson and Milner. 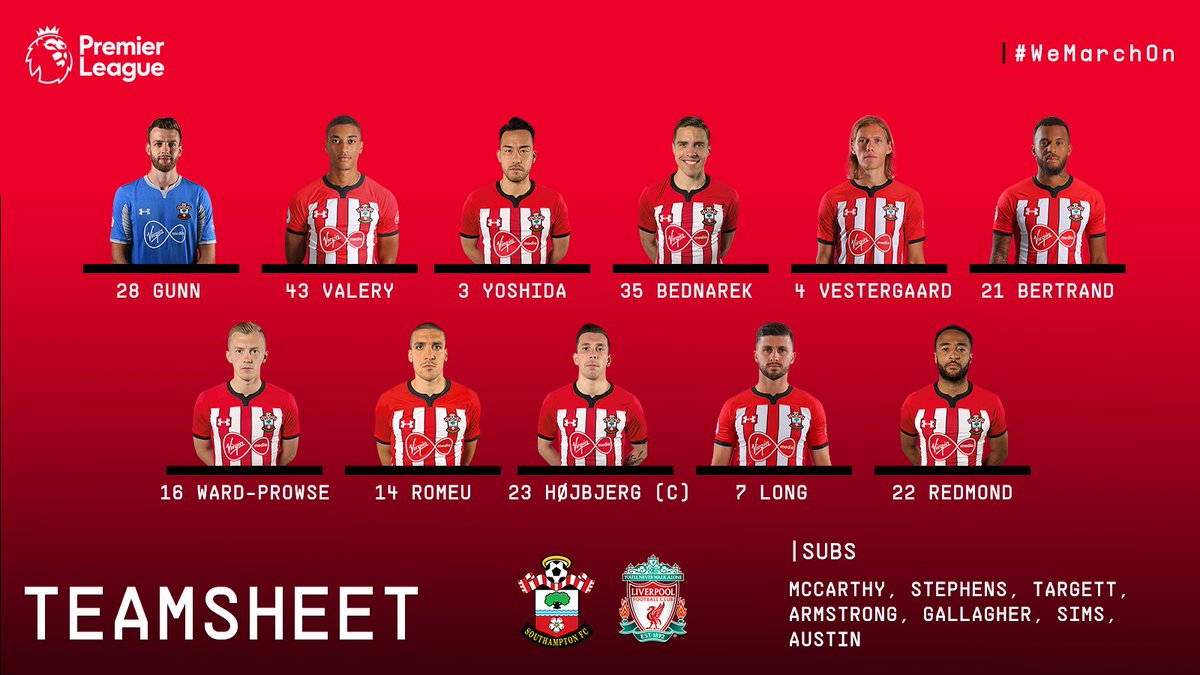 Pre match with Jamie Carragher, the Scotland captain said he's enjoying the competition with Trent to provide the most assists but also adds:

'We've not kept a clean sheet in a couple of weeks so we need to get back to (doing) that. Assists at the other end are an added bonus.'

"We need to play better than v Spurs"

Andy Robertson talks to @Carra23 ahead of tonight's clash at Southampton.

Back at his old ground.  Liverpool aiming for an 18th clean sheet of the season. We are underway at St Marys.  Liverpool in their purple and orange away kit.

2' Lively start from the reds.  Virgil van Dijk being predictably booed by the home fans with every touch.  Liverpool look eager to get the ball forwards quickly.

Southampton also not hanging about.  This could be a good game.

5' Corner for Saints comes to nothing.

Shane Long is in plenty of space in the middle of the penalty area and he puts the ball away after a cross in, and a header onwards.  Another clean sheet gone for Liverpool.

19' Liverpool needlessly put themselves under pressure and should be 2-0 up.  Overplaying it at the back and it requires a van Dijk interception to clear it for a corner.

24' Slight improvement in Liverpool in the past few minutes.  Very slight.

30' Chance for Firmino there.  He was waiting for the ball to come down and didn't wait long enough.  Not enough power on the shot.

37' Trent Alexander-Arnold with the cross and Naby Keita manages to rise highest to head in the equaliser.

He had been pretty poor so far but that's a well taken header.

44' Good break from Southampton and they're almost in again.  Cross across the face of goal cut out by van Dijk.

45' Firmino drills a shot wide of the goal.

Southampton should have scored more than one and Naby Keita has been very poor, but then pops up and heads in an excellent Trent Alexander-Arnold cross.

That was a first Liverpool goal for Naby Keita in his 22nd appearance. pic.twitter.com/iadUAyAdOn

Back underway.  Come on Liverpool!

48' First big chance falls to Saints.  Cross whipped in and Nathan Redmond is so close to smashing in a header.  Maybe Matip just put him off.

49' Jan Bednarek gets a yellow card for a foul on Sadio Mane on the halfway.  The Liverpool man was making a quick counter-attack.

Now they've got a corner.

It's headed wide.  Southampton continuing to be the better side in this game.

Liverpool about to make some changes here.  Henderson and Milner coming on.

58' Keita brought down in the area.  Clear penalty.  Not given.

59' Two changes for the reds.  Wijnaldum replaced by Henderson.  Alexander-Arnold replaced by Milner.

62' Firmino fails to connect cleanly with that cross.  He's had a couple of opportunities.

Liverpool look a bit brighter.  Not just down to the substitutes as they had started to improve just before then.  A bit more determination to win the ball back.

67' Liverpool building pressure.  Firmino with another chance there in the area - ball just didn't drop and Yoshida did well to block.

Couple of corners here for Liverpool.

Lot of fight now from Liverpool.  Great leap and header from Keita to win the ball back and then Milner executes a perfect tackle on Josh Sims who was heading deep into the Liverpool half.

75' Overhit cross there by Robertson.  Salah in plenty of space.

80' Liverpool power up the field, it's Mo Salah, he's running, is he going to pass?

83' Romeu and Vestergaard head off.  On comes Charlie Austin and Stuart Armstrong.

86' What a turnaround by Liverpool. It's substitute and captain Jordan Henderson who powers forward and gets on the end of a Bobby Firmino cross.

87' Dejan Lovren comes on for Naby Keita who gets a hug off the Liverpool boss.

89' Andy Robertson gets booked for a foul just outside the edge of the area.  Free kick in a dangerous position.

Hojberg puts the ball over the crossbar.