Youngster Rhys Williams comes in for Nat Phillips as the reds take on Atalanta in Italy.

Williams came on for Fabinho during last week's home game against Midtjylland - defender Nat Phillips had not been named in the reds European squad for this season.

Diogo Jota has been chosen ahead of Roberto Firmino in Liverpool's front three after excelling in recent performances.

A win would give Liverpool three consecutive opening wins - a feat not yet achieved by the reds since the tournament revamp.

Top two in the group

A draw would keep Liverpool top of the group whilst a victory here in Italy could Liverpool needing just one point from their final three games to qualify out of the group.

The reds have not won all three opening group games in the Champions League before and will likely have a lot of attention on Sunday afternoon's game away at Manchester City.

Here's how the Serie A side look for tonight's game.

Bergamo was in the region hardest hit by Coronavirus in Italy early in the pandemic, and likewise Liverpool has suffered also in recent weeks.

Tonight the focus will be firmly on the football. 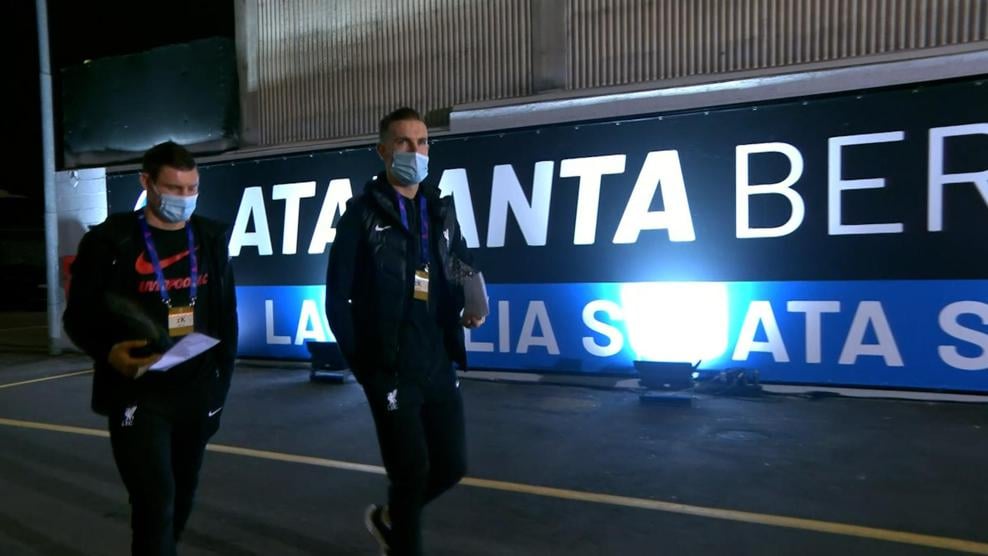 2' Jota with the reds first decent chance - he finds himself in space inside the box but the keeper gets himself over that shot.

13' Liverpool not looking like they were the team doing the travelling.  Mane and Jota looking lively and Salah had a potential shout for a penalty.

Is this the future front three - or is Firmino just having a rest?

16' An incredible fourth goal in four games from Diogo Jota who has made an incredible start to his Liverpool career.

Can he be dropped?  Not right now he can't.

25' All of the front three looking lively here.

Jota making good runs into the area - managed to get to a through ball first and sends it across into the box.

Ball makes it way back to Robbo who shoots and.... well wide!

30' Zapata collects the ball and lifts his shot on to the crossbar.

But that signals the linesman's whistle - he was offside.

The reds high defensive line 'almost' caught out then.

Diogo Jota collects the cross and takes out the defender before firing it past the goalkeeper into a tight gap in the inside corner of the goal.

2-0 to Liverpool who are really enjoying this trip so far.

One for more for a Jota hat-trick....

Collects the ball, curls it around the defender and a great save by Sportiello to tip it out for a corner.

Very good half from Liverpool with all three forwards looking lively.

Diogoal Marajota with two very well taken goals for the redmen.  He is loving life at Anfield.  He's scored all of Liverpool's last five goals that have not come from the penalty spot.

Big question now is - do you leave Jota on or bring him off with an eye on Sunday's game v Man City? ????

Ajax leading 2-1 away at FC Midtjylland at half time.

If it all stays like this, Ajax will move level with Atalanta on four points.

Wonderful run up the final third of the pitch from Mo Salah, who collects and puts a delicious left footed curler into the corner of the net.

49' And Sadio Mane adds his name to the goalsheet

Another great finish - this one dinked over the keeper.

52' Atalanta take off their striker Zapata and bring on midfielder Pessina on.

THAT'S THE HAT-TRICK FOR DIOGO JOTA!

54' Sadio Mane with the through ball with the outside of his boot, Jota takes it around the onrushing keeper and sticks it in the empty net.

Correction to our earlier post.  It was Muriel who went off for Atalanta on 52 minutes.

I know that because Zapata has had two great chances in the past five minutes.

First a chance that hit the inside corner of the crossbar and bounced back out and another now which required Alisson to produce a fine save.

84' Good save there by the Atalanta keeper to deny another Mo Salah goal.

Five changes for the reds but Salah and Mane not given a little rest.

Well offside.  That was their last chance to dent the clean sheet.

Liverpool win their first three group games for the first time.  Diogo Jota with a hat-trick, Mane and Salah with a goal each added to it.

Good use of the squad and Rhys Williams and Joe Gomez enjoy their clean sheet!

As it stands, Liverpool require one win from three to ensure they qualify for the knock out stages.