The road is beginning to run out for Liverpool if they want to get back into the Champions League next season.

The reds take on Newcastle at Anfield in the early afternoon kick off, desperate to make a place in the top four stick.  They start the day in seventh place with six games and a maximum 18 points remaining.

Mohamed Salah returns to the Liverpool starting XI and all four forward players are named in the team.

Fabinho continues at the back alongside Kabak with Phillips out with injury.  Ben Davies is not in the matchday squad, although Rhys Williams is on the bench.

Victory today would move Liverpool into 4th, at least temporarily.  Chelsea face West Ham in the evening kick off.

Here's how our opponents line up today.  Former red Jonjo Shelvey in the starting XI.  Javier Manquillo on the bench. 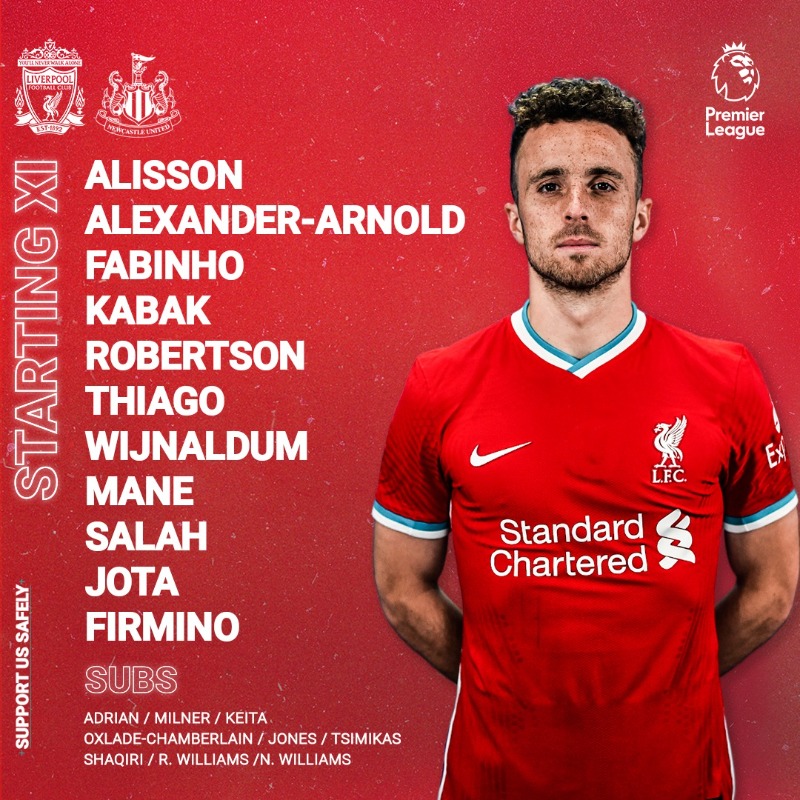 Support for Klopp and the players as the team arrive at Anfield.

A different kind of welcome for the #LFC squad today as fans line Anfield Road to show their support for Klopp and the players. pic.twitter.com/czKcNVV8aZ

This looks very much like just a two man midfield.

All four forwards high up the pitch in these early phases.

4' Mane with the cross, off a defenders head, Salah spins and smashes that into the net.

Incredible.  His 29th of the season.

13' Wonderful ball forward by Trent Alexander-Arnold but Mane is offside.

Liverpool looking bright and in the mood.

Newcastle pumping those long balls over and it was Fabinho caught out there.

Kabak mops up with the clearance.

From the resulting corner Newcastle put the ball in the net but it was well offside.

Jota smashes that one over the bar.  Good move and good chance.

24' Good work by Mane but Jota shins that at the keeper.

Great opportunities for him to end his 4 game drought.

29' Newcastle make a terrible mistake with a goal kick.

Ciaran Clark at fault.  How Jota didn't put that one in?

37' Mo Salah fed with the ball and you really fancied him in that one v one.

Dubravka manages to claw it away.

That should have been goal number 30 for Mo.

41' Liverpool with their 9th chance of the game.

These have not been half chances.

Salah and Mane with a two on one but somehow Mane gets caught in two minds and Dubravka collects.

Unbelievable.  Liverpool are 1-0 up but it should be 3-0 minimum.

Mo Salah with the early strike.  Since then we've had stacks of chances for the reds in particular.

This game should be done and dusted but the reds have lacked that bit of quality with the final ball and had some moments of indecision.

48' Turn and shot for Bobby Firmino.

Bit of a half chance and didn't get enough power on it.

55' Alisson required to save that one from Joelinton.

Liverpool should be well in front but that was a big warning.

Four man attack starting to give Newcastle a bit too much space.

He's going to be more of a threat than Joelinton was.

73' Liverpool not created quite as many chances this half but have had a lot of possession.

It remains 1-0.  Liverpool should be well ahead .

Longstaff with a poor backpass and again Salah has the shot and Dubravka saves.

The reds will have nobody to blame here if they don't take all 3 points.

From a Liverpool corner, Thiago flicks the ball up and its a Trent volley.  Just wide.

That would have been a sensational goal.

82' James Milner lifts a cross over to the back post.

Just over Sadio Mane's head.  That would have been nice to end the game.

82' Drilled shot by Milner from just outside the area.

Goes through the legs of a Newcastle player but Dubravka still sees enough of it to claim.

85' Almiron gone off with cramp.  Dwight Gayle on.

90+2'  Not remotely surprising.  Liverpool have thrown it away.  Newcastle score.....

Hang on.  Callum Wilson handled that.

90+5' That's definitely the goal though.

Joe Willock gets the ball in the area.  It takes a deflection and that really is 1-1.

Be lucky to finish top 8 at this rate