The reds, with a 100% record so far in this 'group of death' have not only already qualified but will finish the group as winners.

This match does therefore provide a bit of respite in theory for Jurgen Klopp's squad as he does have the option to rest several players.  But the big money of the Champions League means that every group stage victory provides extra millions.  So we shouldn't perhaps expect a League Cup side to be named for tonight.

Porto, however, have everything to play for.  They are currently in second place, just a point ahead of Atletico Madrid, who have a home clash against AC Milan tonight.

Porto could qualify tonight with a win and if Atletico lose, but it's more than likely that the final group game between the Spanish and Portugese side will determine who joins Liverpool in the next round.

We could see Jordan Henderson and Andy Robertson back in the starting line up tonight, and the likes of Minamino and Origi may also get a run out, as the reds start a busy spell of 11 games in the next 5 and half weeks.

Allison is the captain for tonight. Konate and Neco Williams in defence.  Minamino starts up front.  Tyler Morton makes his Champions League debut.

Here's how our opponents line up tonight.

A fairly strong squad line up tonight for Liverpool in a game for a group they have already won.

Obviously Jurgen will have been reminded that a group stage win bags the club £2.3M. A draw earns about £750k.  No bonuses for a defeat.

Let's hope it's an uneventful night for the club's medical staff.

Lots at stake here for Porto.  Liverpool will likely be happy to get through the evening injury free.

1' Konate's kick is closed down straight away.  Not the best start.

10' Porto seeing plenty of the ball.  Evanilson gets away from Konate, but Konate recovers and combined with Alisson they snuff out that chance.

12' Konate disposessed in midfield.  Evanilson finds Otavio who is on for a one v one and it's gone wide.

You would have expected that to be 1-0.

It's referred for a VAR check.  But it's not a penalty.

They've been thin on the ground so far.

20' Minamino wins the reds a corner and from it Konate gets a header away.   But it's gone straight at Diogo Costa.

24' Captain Pepe can't continue.  He's been struggling with some injuries of late, and missed the first group game between these two sides.

27' Not entirely convinced by the Porto keeper here.

Liverpool need to work him a lot more than they are because he seems to engender a bit of panic amongst his defenders.

Especially after that enforced substitution in defence.

28' Mo Salah has the ball at the edge of the box.  Twisting and turning but the ball in was offside so no matter.

Interestingly that Liverpool attack came from a terrible kick out by Diogo Costa, straight to a Liverpool player.

29' Konate booked for what looked like a shoulder barge.   Seems a bit harsh.

It was on the half way line so maybe the Porto bench helped sway the referee's decision.  Klopp not happy about that.

36' It's a breakthrough for Liverpool!

It was a great ball from Thiago and Mane slots it in.

40' Mateus Uribe is booked for pulling Thiago back by his shirt.

Bad news for him and Porto as he misses the next game - which could well be the decider between Porto and Atletico in this group.

It has the atmosphere of a friendly.  Porto started well but Liverpool did grow into the game.

Captain Pepe had to depart mid way through that half which probably helped give the reds more opportunity.

Sadio's had the ball in the net but it was ruled out by the lines of VAR.

Will there be a matchwinner in the second half?

Can the Kop suck one in?

49' Porto free kick, it's about 10 yards inside the corner flag.

Goes low at Alisson who pushes it away - falls to Uribe who spins and shoots and it's gone narrowly wide.  That side of the goal was empty.

It's a super strike - a half volley from about 30 yards out.  Liverpool free kick was initially cleared but only into the path of Liverpool's Spaniard.

He smashes that with some force.  Unstoppable.

What a wonderful, wonderful footballer ????

Either Liverpool are sitting on this 1-0 or Porto have decided to up their activity in this game.

We have a game on now at least.

Minamino has the ball in the net but it's offside.

65' Oxlade-Chamberlain corner comes all the way through the penalty area.  Lands at Mane's feet.

Think he's a bit surprised and he swings at it but puts it well wide of the goal.

70' That man Salah is back in the goalscoring mood.

Classic Mo.  Starts the move with a backheel then puts the defender on his backside then sticks it in the corner.

Klopp thinks this is all done and dusted.  Time for rest.

71' Mane and Salah head off.  Fabinho and Origi are on.

75' Referee points to a penalty after Origi was fouled.

That was at least a yard outside the box.  VAR intervenes and awards the free kick.

And Henderson drills the free kick low and wide.

82' Last one from the reds.  Oxlade-Chamberlain replaced by Milner.

Klopp leaving Tyler Morton on for the full 90.  And the youngster has done well!

There was warm applause a couple of minutes ago when former red Marko Grujic came on to replace Mateus Uribe.

The player was on Liverpool's books for a number of years, however most of it was spent out on loan.

87' James Milner booked for not retreating for a free kick.  That's a suspension ruling him out of the trip to Italy in the final game.

Very impressive from the reds.  A number of changes, although still a strong squad.

Huge confidence boosting goal for Thiago, impressive CL debut for Tyler Morton and Salah keeps up the goals.  Mane and Minamino both with offside goals too.

A thing of beauty.

Group as it stands

Liverpool won the group a few weeks ago.

All three have a chance of qualifying after Milan beat Atletico tonight. Crazy! 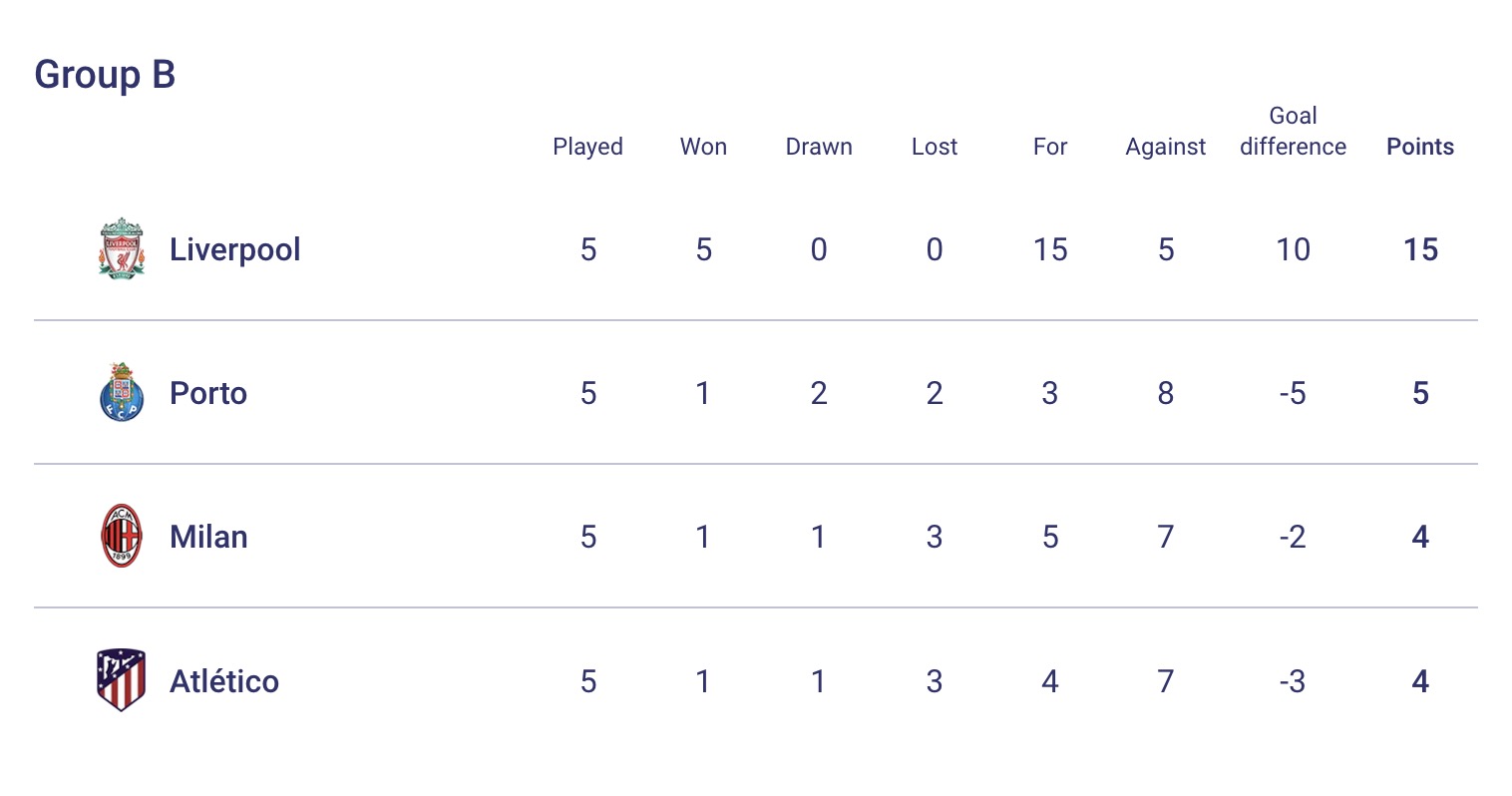 The reds are back at Anfield for the third time in 8 days.

Southampton are the visitors on Saturday - Liverpool will then travel to Everton for next midweeks Premier League clash.

The busy period of the season has begun, and it's started well for the reds!

Thanks for joining us.