Liverpool travel to Brighton for their first Premier League away game in a month - continuing their pursuit of Man City in the title race.

The gap remains where it has for some weeks now - six points and a game in hand.

Brighton are solidly in mid-table at the moment - safe no doubt from relegation but unlikely to threaten the European places despite enjoying a good start to the season. They have lost each of their last three games.

Better news for the home side is that they do have an impressive recent record against Liverpool.  The reds have not beaten Brighton in two seasons.  We have suffered two draws and a defeat in our last three meetings.

Klopp watched his side lose 1-0 in midweek to Inter Milan before going through on aggregate, and last weekend it was an edgy 1-0 victory over West Ham to secure the points.  Reds fans will be hoping that these past two performances have been a blip as they continue their hunt in three competitions.

Jurgen Klopp highlighted that Roberto Firmino is back available for selection.

He also mentioned that the reds, like a lot of parts of the country, are suffering a little bit with a covid resurgence which could affect some availability of players.

Naby Keita could make his 100th appearance for Liverpool if he is involved in today's game.

Naby Keita does make his 100th appearance for LFC.   Diaz and Henderson return to the starting XI.  Firmino on the bench.

Four changes for the Seagulls

Goals have been thin on the ground in Brighton games - at both ends.  They have scored just 27 and conceded 32 in their 27 games so far.  Their top scorer is Maupay on 8 goals.  McAllister and Trossard have four apiece.

Familiar face at the AMEX.

???? Always good to get on with your next door neighbour.https://t.co/pWbEP3weHD

The Premier League have announced that Roman Abramovich has been disqualified as acting as a director for Chelsea Football Club.

We are underway at the AMEX Stadium.

5' Liverpool don't clear a goal kick far enough and Maupay has a drilled shot from outside the area.

That was a decent attempt - very narrowly wide.

In case you are wondering, yes Brighton are not in their home kit of blue and white stripes.

They are wearing their third kit, which is effectively the Ukrainian flag in support of the people of the country.

9' Mane shot deflected behind for a corner in Liverpool's first moment of true danger going forward.

Brighton making this very difficult for the reds.

17' The home team are stroking the ball around well - excellent control and moving it around the pitch quickly.

Liverpool struggling to maintain much possession at all.

18'' Trossard almost in after a poor pass from Keita is intercepted.  Alisson fortunately gets closer to that pass.

19' That's a brave brave header from Luis Diaz.  He heads into the net after a Matip assist.

The Brighton keeper comes out and smashes him across the neck.

Red Card for the keeper, surely?

Incredibly no red card given.  VAR decides the ref doesn't need to look at the screen.

Slow since the goal

38' Few chances of note since Liverpool took the lead.

The reds goal came against the run of play but they've seen much more of the ball after hitting Brighton with that sucker punch.

43' Robertson starts the counter attack from Liverpool up to Salah.

He's under pressure from Bissouma but skips past him.  The angle is tightening but he gets his shot away.

It was a slow start from the reds but the game turned in the 19th minute when Luis Diaz bravely headed from just inside the area after an inswinging cross from <checks notes> Joel Matip.

Robert Sanchez looked like he came out rashly on Diaz who went down immediately.  But VAR declared no TV review was necessary and the keeper escaped without even a yellow card.

After the goal Liverpool improved and took control of the game.

Narrow margin though for the reds.  Work to do in the second half.

Half-time in Austin…so far so good. Always great to be back with the @LFC_Austin !!! ????⚽️ pic.twitter.com/enFbUj6VtZ

Brighton made a change at half time.

Steven Alzate heads off and on comes Adam Lallana.

46' Leandro Trossard is normally more composed there - he hits it over the bar.

50' Lallana down and doesn't look too happy.  Looks like he could be going off after just coming on.

52' Disappointment for Adam Lallana who only lasts about six minutes.  Hug from Virgil van Dijk and Jordan Henderson but he's going off.

57' A couple of big chances spurned by Mo Salah.  First hits the post and then drags a second shot wide.

59' Liverpool awarded a penalty after a handball.  Keita shot blocked by Bissouma's hand.

60' Salah sticks it straight down the middle.  Doubles Liverpool's advantage.

Mo Salah reaches 20 league goals in a single campaign for the 4th time in his 5 seasons with the Reds. He scored 19 times in the other campaign.

66' Danny Welbeck is on to replace Yves Bissouma.

A yellow card and a penalty conceded from Bissouma today.  Not his best.

As Mohamed Salah went down the tunnel a Brighton fan asked for his shirt, Salah smiled, took it off and threw it to him.

72' Henderson shot is scuffed.  The club captain has been a bit more involved in Liverpool's attacks in the second half.

But that wasn't a good attempt.

Liverpool's 2000th Premier League goal since the league was formed in 1992. Mo Salah, aptly, the goalscorer.pic.twitter.com/yVn21x9MfD

75' Yellow card for Alexis Mac Allister who lunges at Diogo Jota.  Could have been a really bad one that.

81' Neal Maupay leaves a late one on Alisson.

Liverpool keeper not happy about that but he's able to carry on.

83' Milner set to come on for the last few minutes.

86' Henderson off and replaced by Milner.  Captains armband swapped too.

88' Alisson tips over the bar from Danny Welbeck.

Liverpool have been on top for the majority of this game but he needed to be alert there.

90' Luis Diaz with a chance to wrap it up but he can't decide whether to pass to Jota or shoot.

Keeper saves.  The pass would have been the better choice and Jurgen Klopp on the sidelines is telling him too.

93' Alisson called in to deny Solly March at the near post.  Brighton still searching for a consolation.

A good day at the office from the reds who crushed Brighton's spirit despite the home team having the better of the opening 15 minutes.

Back to a three point gap at the top of the Premier League. 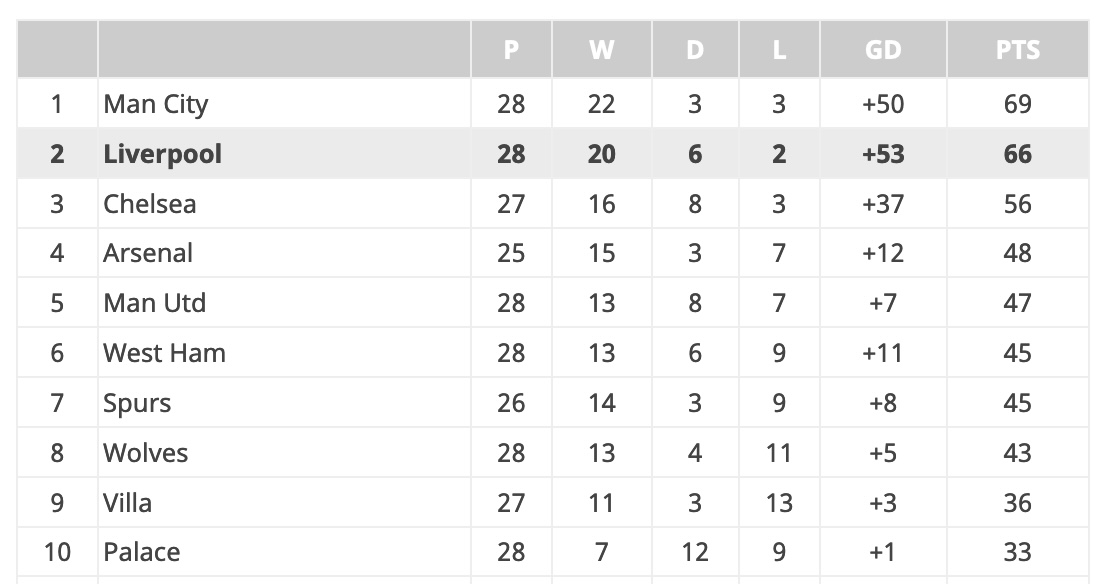 Man City play Monday night away at Crystal Palace before Liverpool finally play that game in hand.  Away at Arsenal on Wednesday night.