The winter break is over and Liverpool return to action at Anfield in the FA Cup.

Liverpool are expected to be boosted by the return of Harvey Elliott to the matchday squad.  The player has missed almost five months of first team action after dislocating his ankle back in September.  He came through a training match friendly arrange during the winter break with success, but Klopp will still want to gently bring him back to competitive action.

The reds new Colombian signing, Luis Diaz, arrived at Liverpool in the previous 48 hours from international duty whilst the reds are still missing Mo Salah and Sadio Mane.  The two African heavyweights will face off in tonight's AFCON final between Egypt and Senegal.

Championship side Cardiff have not had the luxury of a winter break, but they have had the morale boost of two back to back wins as they head in to this game.  The FA Cup may not be high on their list of priorities but the game at Anfield does represent a lucrative pay day for them and results elsewhere this weekend prove that Championship sides are more than capable of defeating Premier League teams who are off the pace for 90 minutes.

This game marks the beginning of a busy period for the reds with all four trophies still in contention and all being competed for this February.

Let's get back to business, reds.

Return of Cardiff to Anfield

This is the first meeting between the two sides since April 2019.  Cardiff were relegated at the end of the 2018/19 season and have yet to break back into the top flight.

The last meeting at Anfield was a 4-1 victory for the reds, in the Premier League, in October 2018.

Cardiff are making heavy weather of this season in the Championship but are outside the relegation zone and have won their past two games, including a victory over Nottingham Forest who are pushing for promotion to the Premier League.

The draw for the next round of the FA Cup takes place 20 minutes before kick off in today's game.

Liverpool's game today is a relatively rare terrestrial live TV offering - it is on ITV in the UK.

30 minutes to kick off

Valentines Day is coming up so here's a little hint in case my wife is reading...

Next round draw coming up.

5th round FA Cup Draw made

A good 6,000 Cardiff fans here in the Anfield Road end which should certainly add to the atmosphere.

It seems an age since Liverpool last played.

It's good to be back!

A minutes applause ahead of kick off for former club secretary Peter Robinson who passed away recently.

We are underway at Anfield!!

2' A momentary lapse by Virgil who takes a heavy touch to the keeper.  He recovers though, obviously.

4' Great turn by Jota and his shot is well saved by Phillips.

That was a wonderful chance.

Minamino has the ball in the net but it's ruled out for offside.  Tsimikas declared offside in the build up.

Good atmosphere being generated by the away supporters.  Liverpool fans yet to kick in to gear.

Wonder if we will see new signing Luis Diaz later on in today's game? 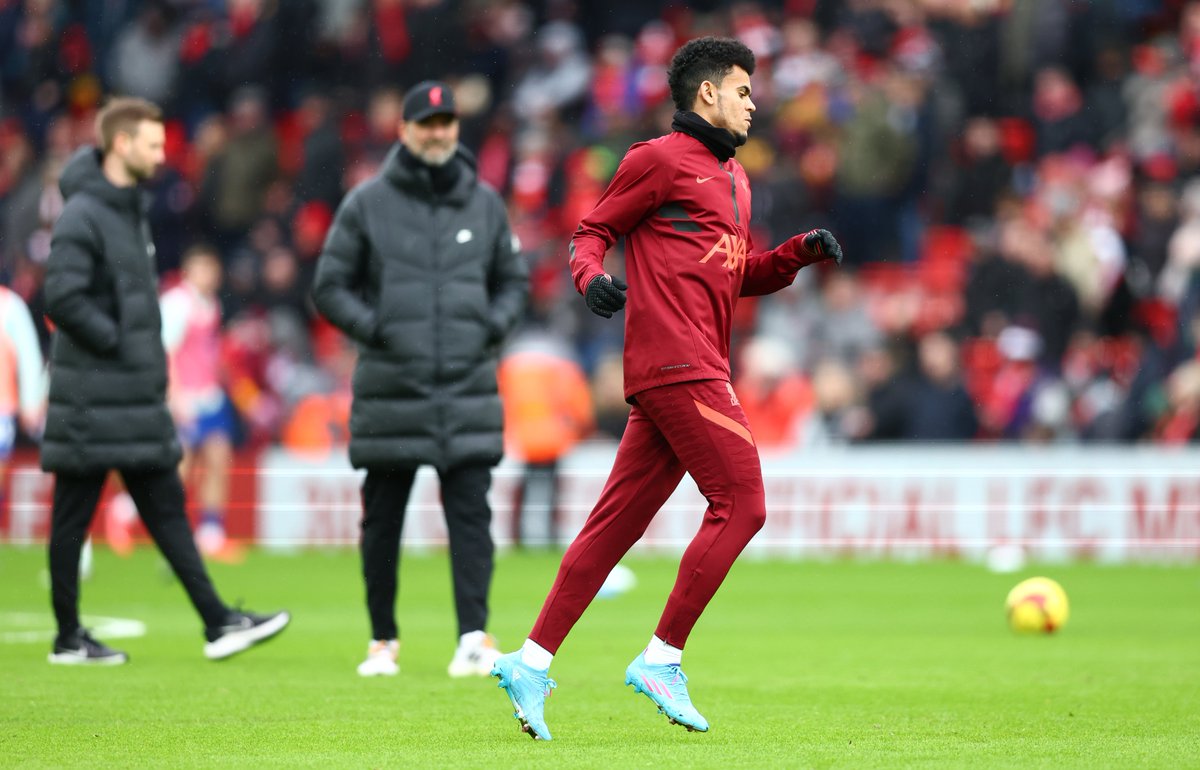 Henderson down after landing flat on his back.

Looks winded at the minimum.

And he's back up, a swig of a bottle of water, and we'll get back on with it.

20' Game has burst into life.  Cardiff forward running into the area but he went down way way too easy with Konate behind him.

Referee says no and VAR says no.

24' Liverpool looked a bit of an unorganised mess there as they try to get back in numbers after a quick Cardiff counter.

Shot goes wide for the away team.

30' Trent delivery whipped in, just a bit too long for Tsimikas.

31' Henderson cross takes Jones by surprise, eventually falls to the feet of Keita but he volleys it well over the crossbar.

35' Wonderful interplay by Trent and Diogo and the ball falls to Curtis Jones, just inside the area, with plenty of space and he misses the target.

Doesn't want to be making too many of those mistakes with Thiago and Elliott on the bench.

38' Curtis Jones skips past Perry Ng and curls that chance high and wide.

40' Trent Alexander-Arnold has a free kick - central but about 25 yards out.

He gets under that and it's over the crossbar.

43' Good move for the reds, Trent collects just inside the area but miskicks his shot and it's out for a throw in on the opposite side of the pitch.

Back underway.  Both teams now kicking towards their own supporters.

46' Kelleher booked for a foul when he came out and mistimed his tackle.

Konate was close by but it is being reviewed by VAR.

53' Wonderful delivery from  a Trent free kick.  Diogo Jota is perched nicely on the penalty spot and it's a wonderful header.

1-0 to the reds.  The Diogoal machine rolls on.

57' A Liverpool debut for Luis Diaz as he replaces Naby Keita.  And Harvey Elliott returns after 5 months out with injury to replace Curtis Jones.

62' Harvey Elliott, looking lively, swings in a left footed shot that is deflected out for a corner.

61' Two subs made just before for the away side.  Harris and Collins replaced by Isaak Davies and Jordan Hugill.

69'  Luis Diaz collects the ball on the touchline, goes past two Cardiff players and lays it across to Minamino who lashes in from 10 yards.

70' Tsimikas and Minamino replaced by Robertson and Milner.

HARVEY ELLIOTT scores his first ever Liverpool goal on his first game back after a 5 month lay off.  It's a lovely turn and smashed shot into the Kop net.

So happy for him.

80' Cardiff grab a goal back.  Liverpool back tracking as Cardiff advance and Colwill gets the ball at the edge of the area and then fires it past Kelleher.  Nice team goal for the Welsh side.

84' Went for a challenge and it looks like a Cardiff player landed on his knee with his studs.  Painful.   Should hopefully be okay.

It is Liverpool who will face Norwich City in the last 16 of the FA Cup.

Jota opens the scoring before Luis Diaz and Harvey Elliott entered the fray.  The Colombian with a nice assist for Minamino before Elliott scores a sensational debut goal for the reds.

A late consolation for the away side but a good second half from the reds.

All four trophies still up for grabs...

Best of luck to Sadio and Mo tonight in the AFCON final.  Liverpool host Leicester City in the Premier League on Thursday.  Let's hope Mane and Salah are still friends...

'It's hard to put into words.  After having a long time out, it's my job at the end of the day.  It's a moment not to forget for me and my family.

Watching this man (Diogo), I've been getting some tips off him.  I was glad I was able to do it.'

Elliott pays tribute to physiotherapist at the club Joe Lewis who provided him with immense support during his time injured.