Once again, Fernando Torres scored a goal in front of The Kop which helped Liverpool take their final three points at home and send the fans back out of the gates of Anfield happy, with a justified win. Something that’s been quite an occurance this season. This was to be the last of his goals for the time being where Anfield is concerned. But there’s still one last game to go and you wouldn’t bet against him to go past the 32 goal mark for the season. 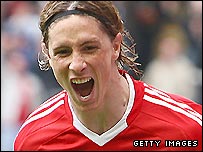 The first half of the game had signs of a european hangover for the reds. At times, the only really fresh display was that of the excellent new Liverpool kit the players were wearing for the first time. Although there were some periods of good possesion, there was little on the attacking front. Man City looked like they wanted to give their loud fans something to cheer about amongst the mess that’s suddenly put their managers position in great doubt from their owner. But it was clear that Liverpool could easily step up a gear if they wanted to. A 30 yard shot from Gerrard and a wide shot from Torres was only the real threats of the first half for Liverpool.

But the gear was stepped up come the second half and the reds came out with a bit more drive shooting at the Kop end for the last time this season. Rafa obviously had words at the interval. Torres threatened with a cross goal shot, Kuyt had a header just go wide and Gerrard was starting to dominate with his trademark runs back and forth from midfield to attack. City nearly had a chance to peg the reds back with a great free kick from Elano, which hit the post. But that was to be one of the very few chances City had in the second half. On 58 minutes, a poor clearance from the City defence was met by Kuyt who managed to direct a ball to Torres, which left him to beat Citys best defender and slot the ball home through the keepers legs. The ground erupted and the european hangover was gone. It looked like we were ready to bag some more goals after Torres made it one nil. Babel had a great chance to make it two nil after some determined work from Torres to stay on his feet and get the ball in the danger area, but Babel got closer to the corner flag than the goal. Mascherano went on a twinkle toe run through the midfield but seen his shot saved. Hyypia put an amazing ball into the box for Kuyt to head onto the bar. But near the end, it was another important player in a Liverpool shirt that once again made us get the three points. Benjani took a great free kick which Pepe Reina saved even though the ball was going in the opposite direction.

There were some old regulars not even on the bench for this game. Time will tell if such players might have missed out on the last game at Anfield for the last time. But there was one regular for our league winning reserves who done himself no harm in an effort to break through to the first team next season. At quite a young age, our left back Insua looked professional and disciplined in the first team. A sign of the foundations that are being layed for the future. But there is no doubt we have a player who can go on to do amazing things for Liverpool. He’s gone straight into the first team and fitted in like he belongs here. Congratulations to our unstoppable Fernando Torres. Here’s to many more Anfield goals. And hopefully he’ll be walking round that Anfield pitch this time next season with a big trophy.