Liverpool moved level at the top of the Premier League after a home victory over the Blades filled with more VAR involvement.

The away side were awarded a penalty in the opening stages for a clean tackle outside the penalty area.  The reds equalised before half time before Salah had a winner disallowed in the second half.  Diogo Jota ensured all three points eventually made their way to Liverpool when he did score a winner that not even VAR could chalk off.

The reds welcomed back Alisson Becker to the starting XI - a boost for the defence that is without Virgil van Dijk.

Diogo Jota was also included in the starting line up - as Fabinho moved back to partner Joe Gomez in central defence.

Sheffield United have proved a particularly tough nut for the reds and despite their dire form this season, so it proved again.

On the opposition team was Rhian Brewster, the recently departed Liverpool youngster who Chris Wilder will be hoping can add a significant goal threat for his team.

Liverpool could have had two goals before the penalty incident.  Mane had caught Aaron Ramsdale out of position before Trent Alexander-Arnold tried an audacious free kick that required tipping over the bar.

But in the 13th minute, referee Mike Dean harshly gave United a free kick for a foul by Fabinho on Oliver McBurnie.  We headed off to VAR which appeared to show that Fabinho had got the ball first.  Even worse was to follow as the 'foul' was adjudged to be inside the penalty area.

Disbelief from Fabinho and then Sander Berge put the penalty past Alisson to put the away side in the lead. 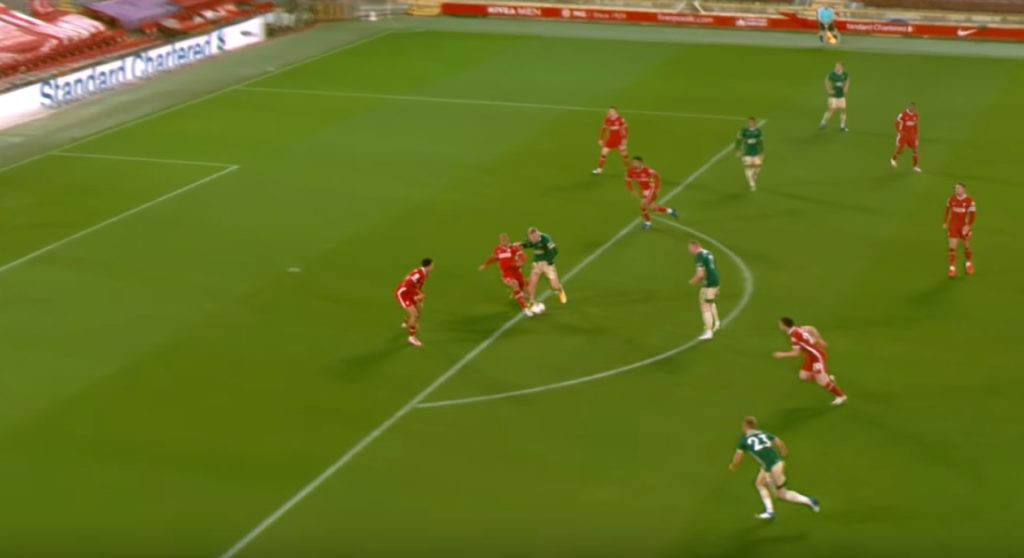 As the half approached it's conclusion Jordan Henderson swung in a cross for Mane to head goalbound.  The keeper saved, but only in the direction of Firmino who put the ball in the net to level.

In the second half, Salah thought he had added to his 100 Liverpool goals before VAR adjudged him offside - leaving the winning goal to arrive at the head of Diogo Jota who made space at the back post to convert a Sadio Mane cross.

Three important points for the reds who, but for the failings of VAR last weekend, should be ending the week clear at the top of the table.

As it is they share the podium with Everton who have yet to play this weekend.

Attention returns to the Champions League this week for Liverpool as they enjoy a week long period of three home games.