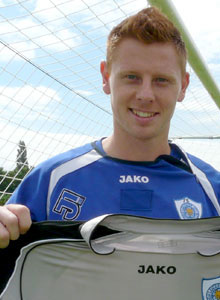 David the son of Alvin Martin started his youth career at Spurs as a defender before to moving to Wimbledon and onto MK Dons when they relocated to Milton Keynes in 2004.

David signed for Liverpool on 12 January 2006. and has failed to make the break through to first team football the closest being a few unused substitute appearances.

In 2007 David had a successful loan spell at Accrington Stanley helping them avoid relegation. Following the signing of a new contract keeping at Anfield till June 2010 he joined Leicester at the start of the season on a six month loan.

David also has one England Under-20 cap to his name as well as appearances for both the under 17 and 19 national teams.

Martin goes on loan to Tranmere