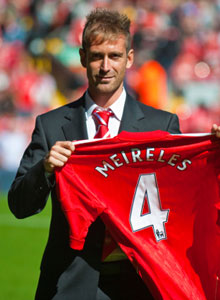 Liverpool signed Raul Meireles in August 2010, after selling Javier Mascherano to Barcelona.  With Alberto Aquilani also having been loaned out in the summer the reds appeared short in the middle of the park.

Meireles spent most of his early career at Boavista before taking the step up to FC Porto in the summer of 2004, just after Porto had won the European Cup.  It didn't take long for him to become a first choice midfielder and he was instrumental in the Porto sides that won four consecutive titles from 2006 to 2009.  During his 6 years at the club he also won 3 Portugese Cup titles.

Raul earned his first international call up in 2006, and was in the Portugese Euro 2008 squad.  He has been a regular fixture since and even grabbed a goal in the World Cup finals in South Africa, in the 7-0 demolition of North Korea.

He made his debut for Liverpool in the 0-0 draw against Birmingham City. 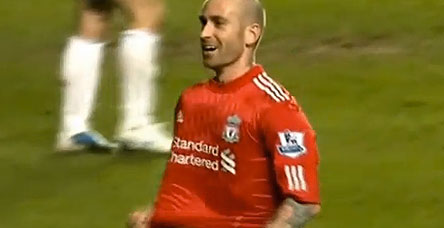