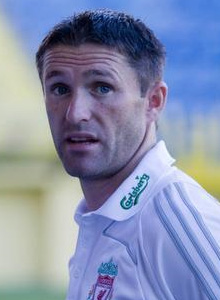 Robert David Keane was born on the 8th July 1980 in the Irish city Dublin. He started his footballing life at a successful Dublin team that goes by the name Crumlin United.

There, he was signed up by English team Wolverhampton Wanderers. Keane went immediately into the Wolves youth squads were he impressed with his goals and commitment to his teams cause. He earned a debut for the Wolves first team, against Norwich, at the age of just 17. He impressed on his debut by scoring 2 goals. The next season he finished top-scorer for Wolves Keanes’ successes with Wolves and Republic of Ireland, earned him a £6 million move to Coventry City.

There he impressed so much that he earned himself a move to Italian side Inter Milan for £13 million. Inter never really gave Keane a chance and therefore he was loaned to Leeds United were he eventually signed for £12m. Keane didn’t enjoy a successful time at Leeds, however, and was eventually sold a year later ,after signing, to Tottenham Hotspur for £7m as Leeds were in a financial crisis. At Tottenham, Keane became one of the brightest talents in the Premiership. He scored 13 goals in his first season and then 16 the following. However, Keane then was omitted from the Spurs first eleven as new manager Martin Jol preferred a strike-force of Jermain Defoe and Mido.

Despite this, Keane won his place back into the first eleven and went on to score 16 goals for Spurs in the 2005-06 season. He was appointed captain By Republic of Ireland Manager Steve Staunton. Keanes injury stalled his career in 2006-07 season but he still returned to score 15 goals in 15 games which brought it to 22 for the season. Then in 2007-08, he scored 23 goals for Spurs. This was the most successful season, for Keane, in his career. He also lifted the English League Cup as captain for Spurs.

Keanes impressive form earned him a move to his boyhood team Liverpool for £20m in the summer of 2008. He is likely to be paired up-front with Fernando Torres for most of the season. Liverpool fans hope he will help to return the league title to Anfield after 18 years of wait. At Anfield, Keane will wear the number 7 shirt that was worn with pride by such Anfield greats as Kenny Dalglish and Kevin Keegan. (Semple)

Robbie Keane's Liverpool career did not get off to a flying start.  By the middle of December he had only scored in one Premiership game - two goals against Portsmouth, and with Torres suffering from injuries eventually Rafa lost patience and began to opt for Dirk Kuyt as the lone striker. Despite rumours, both Rafa and Robbie insisted the player would still be at Anfield after the January transfer window.

With the return of Torres and the continuing poor form from Keane, the player was left out of the FA Cup clash against Everton. Keane wasn't at Anfield to watch the game. A week later he was again left out of the squad as the reds won 2-0 against Chelsea. Keane resigned for Tottenham Hotspur for 16 million pounds one hour before the transfer deadline.(JD)

Lawro at centre of Keane-gate

Keane – I never doubted myself