Liverpool welcome Sean Dyche's improving Burnley side to Anfield in the early Sunday kick off.

Jurgen Klopp, not a fan of the early kick offs, had issued a message to supporters to be wide awake for the clash and lend plenty of vocal support to the team - something that is not always guaranteed for kick offs at this time.

And reds fans will be hoping the team are wide awake too - after a disappointing draw away at Everton last weekend ceded control to Man City in the title race.

Man City won their league game yesterday against Watford to extend their lead at the top.  A Liverpool victory today will cut that lead back down to one point with a further 8 matches to play.

After a horrible opening half season for Burnley (they had just 10 points from 19 games) - they have rapidly improved and collected 18 points from the last 10 games (Liverpool have 19 from 10).

The reds are expected to welcome back Roberto Firmino to the starting line up for today's home game.

Here's how the top of the league table looks going in to today's game.

A Liverpool victory today would be our 22nd league victory of the season.  The club have only won 22 or more league games in a whole season five times since the introduction of the Premier League (which was originally 42 games a season).

A Liverpool win would also mean the reds equal their highest points total, after 30 matches, in English top flight football. The current record from 1987/88 saw Liverpool reach 73 points after 30 games.

If Salah scores on Sunday he will equal the Premier League record for reaching 50 goals for a single club in the fewest matches. Alan Shearer did so in 66 matches for Blackburn.

Sadio Mane has scored in each of his past five league games at Anfield, netting six goals in total.

Two changes for the reds.  Roberto Firmino in for Divock Origi.  Adam Lallana in for Jordan Henderson.

Here's how they line up

If Peter Crouch comes on he will be making his 25th appearance against Liverpool for a 6th club.

Klopp speaking to BT Sport on a rare start for Adam Lallana.

“We had a complete training week and actually that’s how it is.

“If you have five sessions a week, everybody can show up and Adam was exceptional during the week. So, in a situation where you think a little bit how you can adjust one or two things, it’s smart.

“He trained well for a while already but this week was especially well – that’s the reason why he starts.”

Teams are out at Anfield this Sunday morning... and the sun is shining.

7' Burnley take a 1-0 lead. Corner goes straight in from Ashley Westwood. Replays show James Tarkowski was holding Alisson down.  Clear foul not given.

9' Big mistake there from the referee and signifying the mood around Anfield now, the sunshine has left us to be replaced by more wintry weather!

14' Reds break, Firmino picks up the ball but Tarkowski gets in the way and it is deflected for a corner.

17' Clash of heads there with Sadio Mane and Phil Bardsley.  Bardsley receives some treatment.

17' Alexander Arnold crosses in, Mane is up to head that but it goes wide.

19' Good work from Salah on the touchline.  He tricks the ball across to the area and Firmino dinks it into the net.

24' Alexander-Arnold with a shot from outside the area.  It's rising... and it's well over the bar. 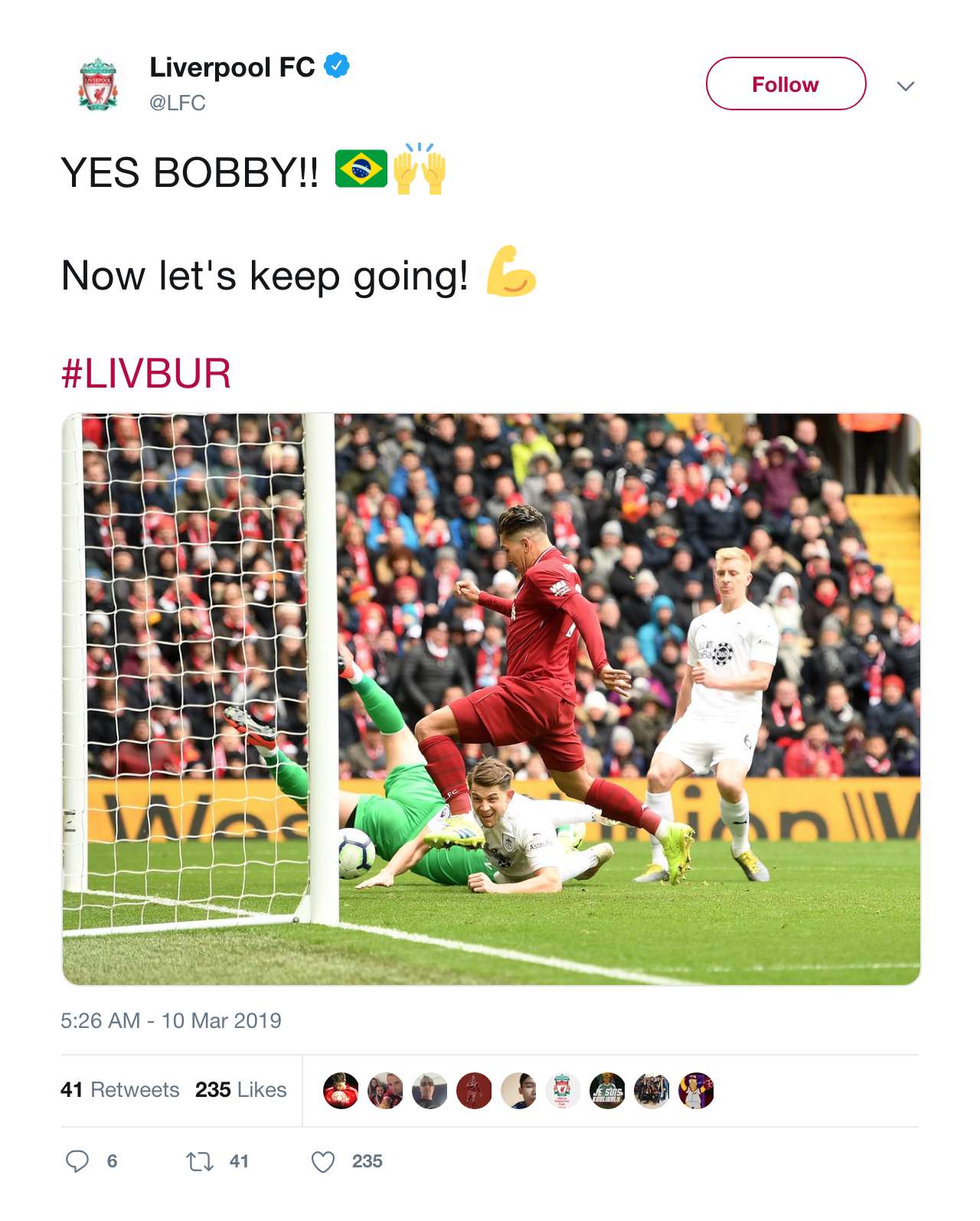 28' Another cross allowed in from our right hand side (Trent AA's side).  That one goes over everyone's head thankfully.

29' Sadio Mane scores for his 6th consecutive home league game.  Adam Lallana great block.  Salah is on to it - lays it off and curling finish from Sadio!

34' Jeff Hendrick smashes a shot at goal but Chris Wood deflects the ball out for a Liverpool goal kick.

Alisson Becker definitely on the end of some roughhouse tactics for Burnley's set pieces.

37' Foul on Alexander-Arnold there.  Weird moment just prior to that were a long ball just completely stopped without a player near.

38' Trent fires that free kick straight over the bar.

42' Sean Dyche has not stopped moaning from the touchline for almost the entirety of the first half.

Seems to forget the referee gave him an illegal goal to kick start this whole game.

Unpleasant conditions now inside the ground as we approach half time.  Not often you see Premier League goalkeepers unable to clear the half-way line with a kick.

Burnley score from a corner after Alisson is fouled in the box.  But Liverpool fight back strongly with goals from Firmino and Sadio Mane and a decent first half performance from Lallana who provided an interception in the build up to the second goal.

Grim conditions for this game.

Liverpool kick towards The Kop in the second half.

Liverpool aiming to secure the win.

52' Bright start to the second half from Burnley.  Had a wind-assisted opening with a ball that luckily van Dijk reacted to well.

And up to the other end, Firmino chance almost gets blown into the net!

55' Silky skills from Salah who turns on a sixpence to power into the box.  He manages to earn the reds a corner, which turns into a second corner.

63' It's been a little less entertaining this second half.  Not many chances of note for either side although Liverpool's front three have been combining in some good moves.

66' Henderson coming on for LFC

67' Great cross by Robertson and Wijnaldum's header goes narrowly wide.  Think Mane was expecting to get the header there.

Another tap in for Bobby Firmino.

Mistake from Tom Heaton who kicks it straight at Salah, Firmino with the tap in.

68' Gini Wijnaldum gets a rest as he comes off for Jordan Henderson.

76' Adam Lallana heads off and on comes Naby Keita.

Standing ovation there for Adam Lallana who did well on just his 4th start of the season, particularly in the first half.

79' And Peter Crouch comes on - he replaces Chris Wood.  Berg Gudmundsson on for Hendrick.

82' A lovely threaded ball by Alexander-Arnold and Sadio Mane gets a touch but it bounces up and hits the crossbar and goes over.

86' Sturridge comes on for Trent AA.  Matej Vydra on for Ashley Barnes for the away side.

90+1' Well well, there's a late goal here from Burnley with Gudmundsson putting the ball in the back of the net, somewhat against the run of play.

Have Burnley got time to get something out of this now?

Sadio Mane rounds the keeper and fires in to make it 4-2.

A comprehensive win for Liverpool.  The scoreline flattered Burnley a little.

'The first goal, in a lot of countries, would have been disallowed.'

'We kept as calm as possible.  The goals came from two brilliant moments.  They defended with passion.

What can I say to the boys? Well, maybe defend a little better.  But we scored a lot of goals.

I cannot remember a lot of shots on goal from Burnley.

'Adam was really good.  Exactly as we expected.  The block, the counter-pressing in that moment, I was thinking of bringing him off at 60 minutes but he looked okay so had a bit longer.

'Very good game from him.

Next up on Wednesday is a crucial second leg tie against Bayern Munich who hammered Wolfsburg 6-0 yesterday to go top of the Bundesliga....