Liverpool welcome Everton to Anfield tonight in the 8:15pm kick off that will be streamed on Amazon Prime in the UK.

Everton are still looking for their first win at Anfield this century (their last victory at Anfield was in 1999).  In fact it has been 10 years since Everton beat the reds in the league.  Goodison Park in 2010.

This will be the first of two Merseyside derbies in the next month - Liverpool and Everton were drawn against each other in the FA Cup 3rd round which takes place at the beginning of January.  However, certainly for Liverpool tonight is likely to see a more substantial team chosen.

Alisson misses out due to his handball redcard at the weekend, with Adrian coming in to deputise.  Liverpool are also without Fabinho and Joel Matip - two important defensive figures in the side.  Virgil van Dijk will have to overcome his disappointment at missing out on the ballon d'or in the week.

A great recent record for the reds

The reds recent record against Everton in the League is our best against any Premier League club.

Liverpool haven't lost in the last 17 fixtures home and away - with 7 wins but also a substantial 10 draws.

At Anfield, the reds are unbeaten in 19 seasons.  10 wins and 9 draws and will be hoping to stretch that to a full two decades.

There are a total of 6 games tonight including the Merseyside derby.

Marco Silva is under significant pressure at Everton having received hundreds of millions of pounds to spend on his squad.

Everton have lost 8 of their 14 league games this season, winning just four times so far and are perilously close to entering the relegation zone.

However, so compact is the bottom of the table, that an unexpected win could propel the side up into mid-table - and ending a 20 year wait for an Anfield win would be a huge boost for him.

Nonetheless, the blues have a tricky month ahead with games against a lot of other sides in the top eight of the table.

"Of course I have sympathy because I know how difficult the life of a manager can be. But the last thing Marco needs now is that I feel sorry for him - I don't.

"But I am really on his side because I know about the job.

"The table tells the full truth in May, not now. Go through Everton's squad, it is really good. It's just not clicking 100% but I don't know why."

If you've got 12 minutes to spare you can catch up with yesterday's pre-match press conference.

Salah and Firmino on the bench!

Shaqiri in the match graphic 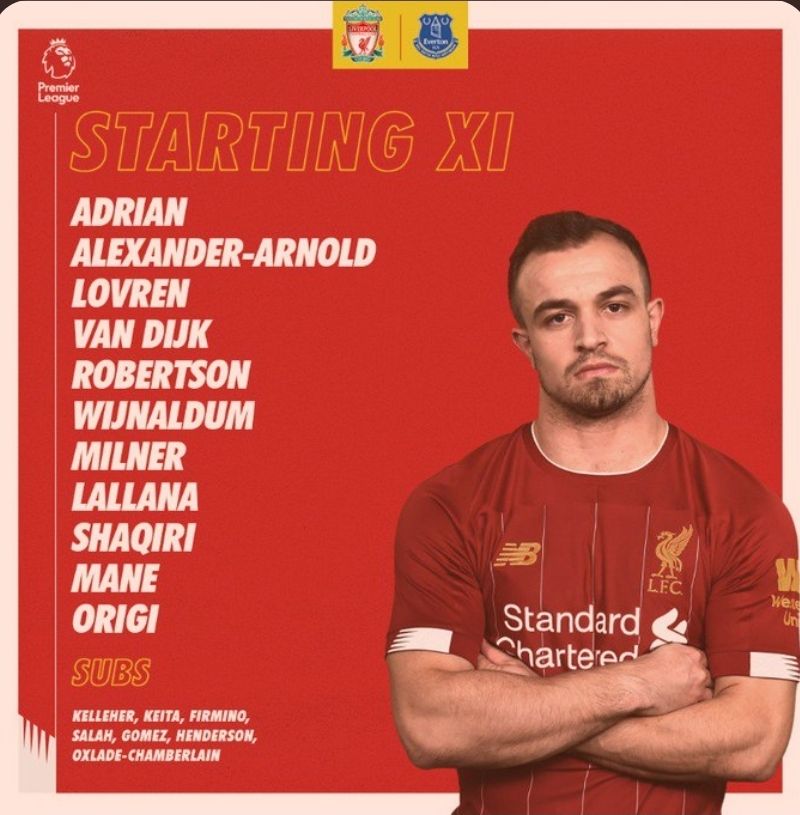 This is Xherdan Shaqiri's first start of the season for Liverpool.

After missing 12 games in Autumn, he has been an unused substitute in the past two games.

He has played a total of 25 minutes this season.

Here's how the blues line up

“This time next year Rodders...” pic.twitter.com/oW21xnOXAL

"We did it because we can do it. I have to show the respect for the boys and I’ve said a lot of times how much I like the squad and now we have to use it.

"We think the game will be really intense and we'll need fresh legs so we brought them in.

Danny Ings has scored for Southampton, which temporarily alters the League Table.

Danny Ings has scored for Southampton, so... pic.twitter.com/MtRCVPCscj

It's a crisp cold Anfield night.  James Milner, captain tonight, leads the players out on to the pitch.

He absolutely loves scoring against the blues.

Wonderfully weighted pass from Mane - down the middle - Origi skips past the hapless Pickford and it's 1-0.

16' Robertson falls over on Tom Davies.  Davies reacts angrily by grabbing Robertson who responds by laughing in his face.

What a ball from Trent Alexander-Arnold to Sadio Mane - excellent control.

Sadio threads it inside the area and Shaqiri runs, turns and shoots past Pickford.

21' Cross comes in, Lovren doesn't deal with it and Michael Keane managed to lift that past Adrian.

27' Alexander-Arnold is the first name in to the book.

31' What a wonderful goal by DIVOCK ORIGI!!!

Big pass upfield by Lovren, Origi shows wonderful technique to take it down and loops it over Pickford!

35' They are rattled.  Sidibe heads off and is replaced by Bernard.  Mason Holgate switches to the right side of defence.

40' Poor shot from Iwobi there that goes wide of the goal.

41' Calvert-Lewin earns a free kick through a dive.

Alexander-Arnold powers down that left.

He feeds Mane who smashes it past Pickford for 4-1.

45+3'  Richarlison scores a second for Everton.

Wonderful half from the reds.  Four great goals, two from Origi, but concerns that we've conceded twice from fairly sloppy defending.

Back on it at Anfield.

That 6 goals in the first half matches a record from 1933 in Merseyside derbies.  Joint most goals in a half of a Liverpool - Everton game.

The reds will now be looking for a fifth goal here.  We haven't scored 5 past Everton for 38 years.

60' Their second of the night.

Moise Kean is on for Dominic Calvert-Lewin.

65' Ball comes out and Tom Davies hits a scruffy one along the ground.  Adrian gets behind that.

No goals yet in this half.

67' Tom Davies gets a yellow card for Everton.  Foul on Trent AA.

And two for Liverpool....

Lallana off for Henderson.

And a standing ovation for Divock Origi.  Roberto Firmino is on for him.

80' Mane should have made it 5 there.  He's taken the ball down well but his shot squirms wide of Pickford's post.

An assist and a build-up assist there for Trent tonight.

84' Free kick for Everton and Wijnaldum slices that out for a corner.

85' And Mane should have scored again there.

Took it round Pickford, then ran out of space.

Straight down the other end and Moise Kean is through, he slides that wide.

Wijnaldum with a nice touch and it's a cool and calm finish into corner of the net.

Liverpool 8 points clear at the top of the League.

Everton move into the relegation zone.

Here’s all the teams in the Premier League who have at least 50% of our points total. pic.twitter.com/lB12nQkITP

'A lot of great football moments.  We spoke before the game about our five changes.  I had to show respect to what they do in training.

'In the next moment you give them the responsibility. Divock's goals, Sadio's passes, Shaq's everything connecting play, Adam Lallana was everywhere.

'But then a bit rusty in defending.  Second balls.  But offensively it looked dangerous.

'All good at 4-1.  At 4-2 I didn't like so much.  Two minutes before half time.  We played an offensive pass when it didn't make much sense.

'That was the first game of the tough fixtures.  We have to make changes and we will make changes.  Naby Keita was ready but I was not brave enough to make six changes.