Liverpool will be hoping to put the disappointment of Wednesday evening's defeat to Atalanta behind them as they travel to Brighton for the early Saturday kick-off.

Mo Salah returned to action in the midweek but the likes of Diogo Jota and Roberto Firmino only had limited involvement as Klopp had made changes particularly in defensive areas.

The reds will be hoping to return at least one of the injured players back in to today's matchday squad.

Liverpool are currently joint top of the league with Spurs who do have a better goal difference.

Lallana to face the reds?

Both Adam Lallana and Solly March are two Brighton players facing late fitness tests to be in contention for today's game.

Adam Lallana left the reds for the south coast after LFC sealed the title this summer.

Tariq Lamptey is unavailable for the home side due to suspension.

Liverpool looking to make it ten...

The reds have won all of the last nine fixtures against Brighton and all of the six Premier League clashes in that time.

Brighton have yet to beat Liverpool at home in any of their seven fixtures in England's top flight.

However, the reds have not won in their last three away Premier League games - two draws (Everton/Man City) and one defeat (Aston Villa).  The reds last away win was over two month ago (v Chelsea).

Jurgen Klopp has made a number of changes as Liverpool's busy run of fixtures continues.  Minamino returns to the side and Henderson is named on the bench.

Lallana on the bench for Brighton

Former red Adam Lallana is named amongst the Brighton substitutes for today's game.

Neal Maupay has four league goals so far this season and is joined as part of their attack by Aaron Connolly and Danny Welbeck.

James MIlner leads out Liverpool for the second time in about 66 hours.

A crisp winter's day across much of the UK today.

A round of applause for Maradona before kick off and now we're underway!

3' Liverpool have got behind the Brighton defence twice already.  Jota fed with a through ball - his pass just a little short of reaching Salah.

And then Fabinho with a pass directly forward and Salah beats the defender, but unfortunately puts his shot wide of the goal.

Great ball played through to Aaron Connolly and he's effectively got a one on one with the keeper but he puts the ball wide of Alisson Becker.

This is a very attacking line up by Brighton who have clearly decided that the best form of defence against Liverpool is attack.

Jurgen on his feet watching the chances at both ends so far! 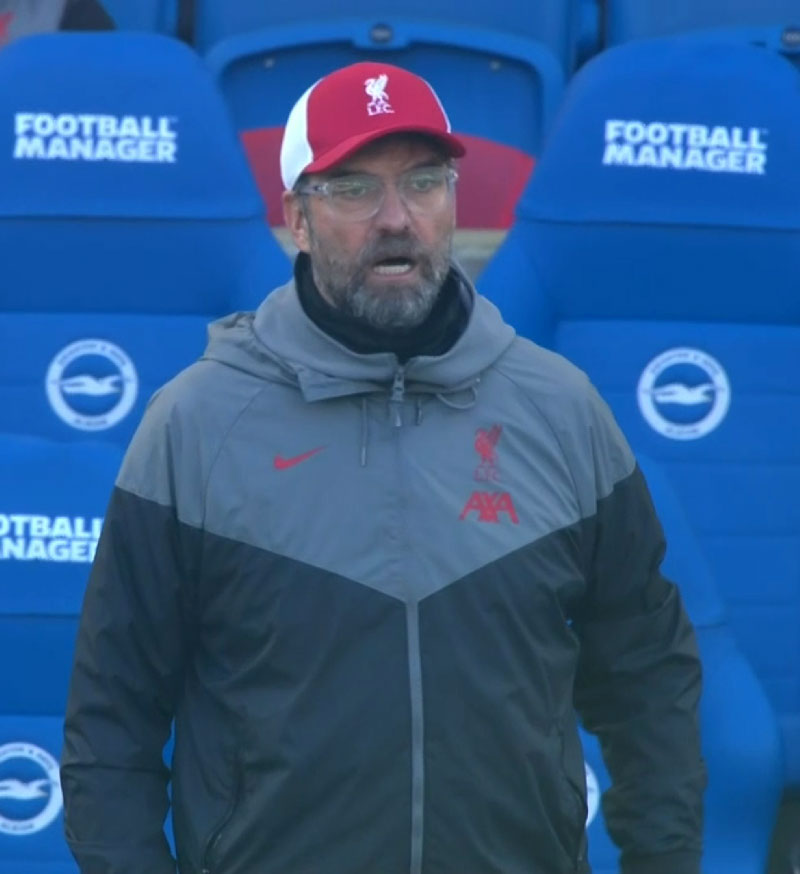 Liverpool trying to make the most of the advantage.

26' Leandro Trossard does finally come on to replace Neal Maupay.

After a very good start from Liverpool - Brighton have looked the most threatening over the last ten or so minutes.

35' Finally - and perhaps against the run of recent play.

Firmino with the flick over the top and it's on to Salah who hits it into the ground and past the keeper.

VAR rule it out

They have the 3D lines out and it's ruled offside.

Jordan Henderson back in the LFC squad for the first time since he was at England injury camp. 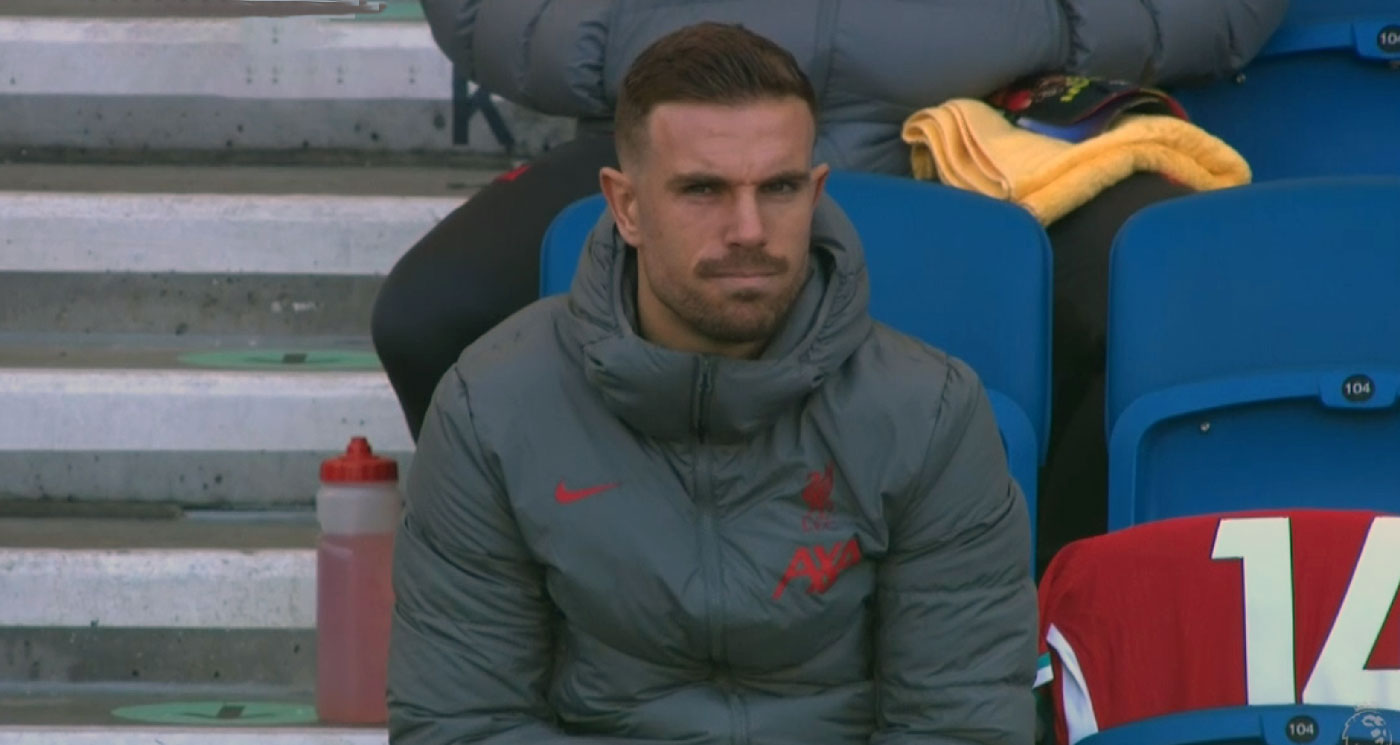 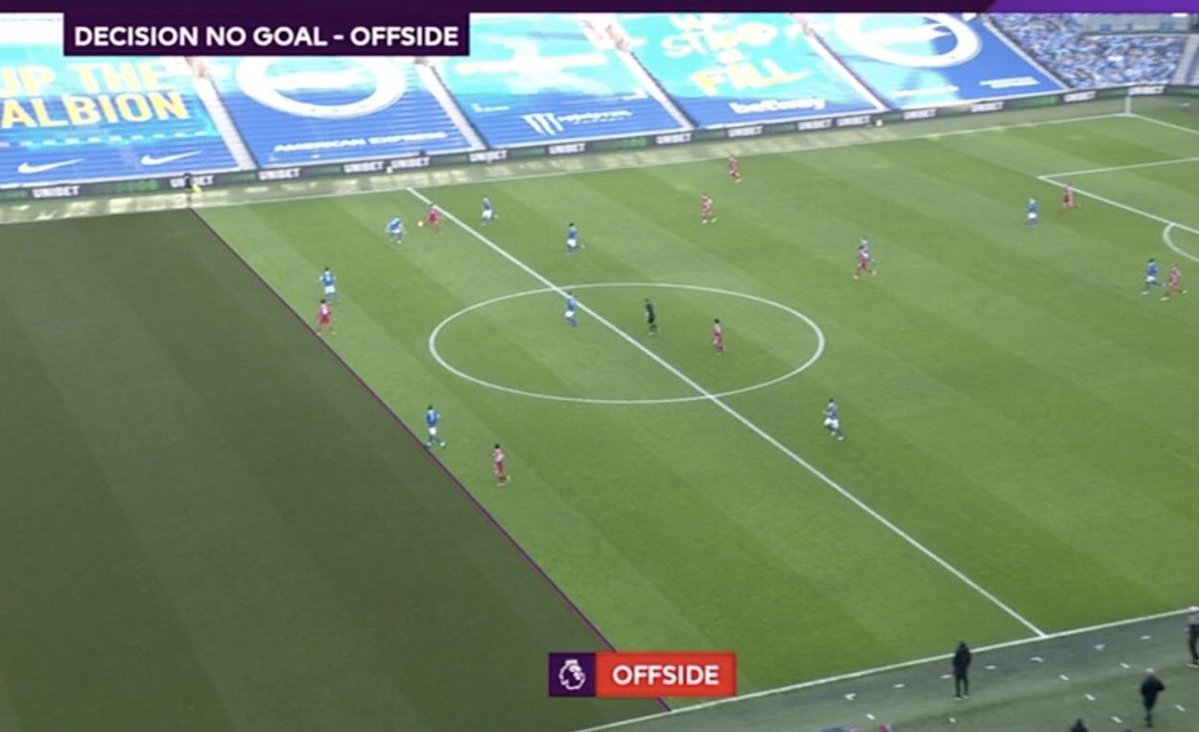 Two minutes at the end of this half.

45+1' Veltman gets yellow carded for a nasty looking challenge on Roberto Firmino.

A penalty miss from Brighton and a Mo Salah goal ruled out for offside.  Some discussion about whether the VAR was correct as it appeared they analysed the freeze frame after Roberto Firmino had already put his pass into the air.

It was very tight either way.

45' Back underway and Jordan Henderson replaces Neco Williams in this half.

53' Welbeck manages to power towards goal, evading Henderson and goes for the shot that can't beat Alisson.

The clock is advancing and the reds will be hoping to avoid four away games without a win.

Robertson on the left, Salah flicks it to Jota who works his way into the box and puts it into the bottom left corner.

64' Mo Salah replaced by Sadio Mane and the Egyptian does not seem happy about that.

Brushes aside Henderson and Klopp as he puts on his coat and sits in the stands.

73' Adam Lallana's game is over 8 minutes after coming on as sub.  He is replaced and heads down the tunnel.  Sad that.

73' Curtis Jones, who didn't train yesterday due to injury concerns, comes on to replace James Milner who looks like he has tweaked a hamstring.

79' Nat Phillips falls heavily on his backside after going for a header.

Concern on the face of Jurgen Klopp but Phillips gets up and back on with it.

82' Ben White carded for a foul on Diogo Jota.  Harsh - looked like he got the ball.

84' Liverpool very lucky to be awarded that free kick in the first place. Robertson free kick and Mane heads it in.

But VAR intervenes again and it's ruled out.

90+2' Brighton awarded a penalty by the ref on the pitchside monitor.  Robertson catching Welbeck.

90+3' Brighton equalise as Pascal Gros fires in the penalty.

Brighton with two penalties, one missed, one given after VAR in the 92nd minute, scored.

Liverpool with 3 goals but two ruled out by VAR.

Top of the league for now

Liverpool's point today takes them back to the top of the league but 21 points from 10 games is not the standard we have been setting over recent seasons.

There are three clubs who could overtake the reds this weekend so top place might not last too long.

Liverpool can rightly be upset about the Mo Salah goal ruled out but Brighton's late penalty, bearing in mind other penalties awarded this season, probably was one.

Eight more games to come this weekend, but it currently looks like this.

Liverpool face Ajax at home this week before up to 2,000 fans can attend next weekend's home game v Wolves. 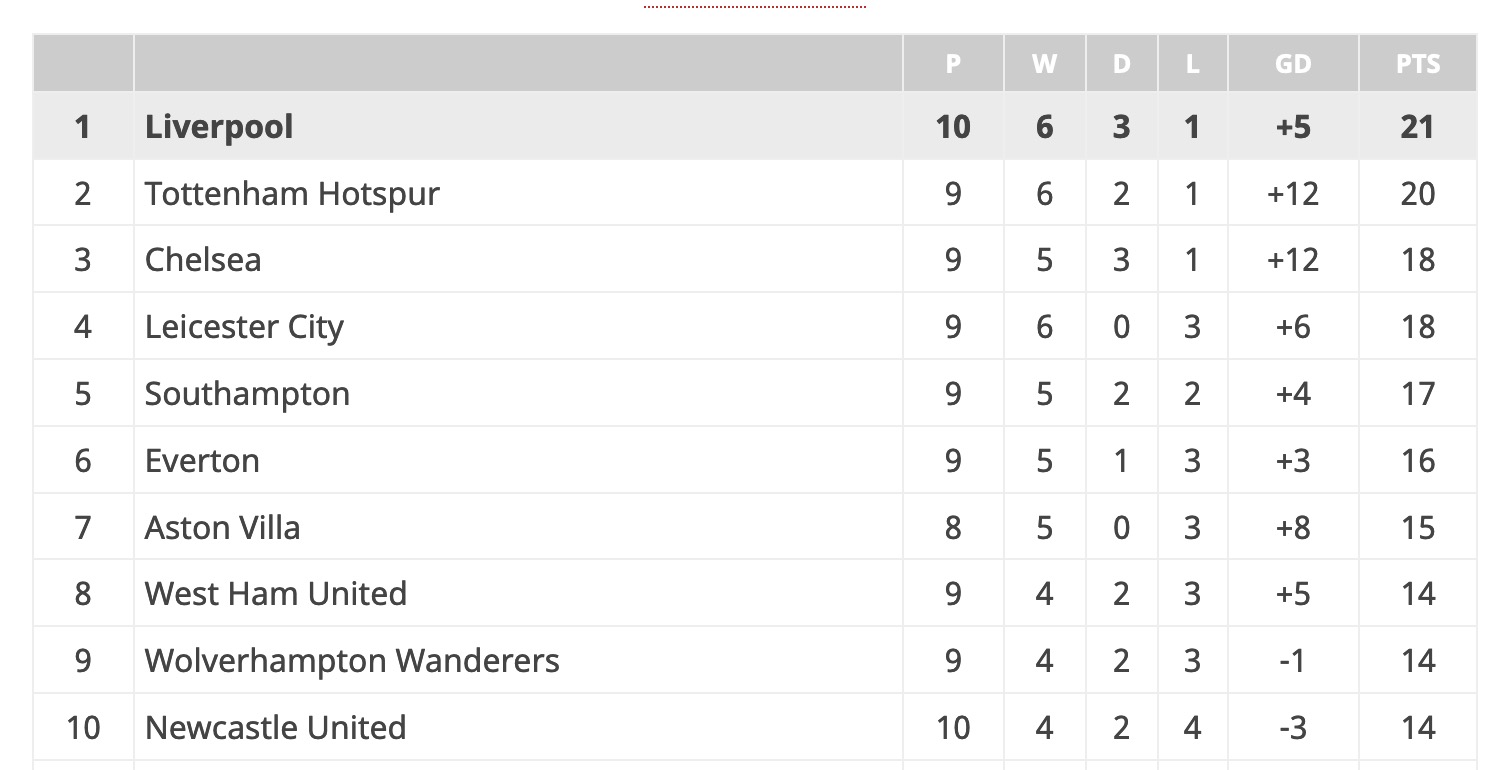