10 years and 1 day since the reds last won a record 8th League Cup we are back at Wembley hoping to make it a new recor of 9.

The reds win that day over Cardiff, under manager Kenny Dalglish, marked a turnaround after a grim period under the stewardship of Roy Hodgson.

Liverpool have reached two domestic cup final since.  Chelsea in the FA Cup later that year, followed by Man City in the League Cup final in 2016.  Both games saw the reds leave empty handed.

But after Jurgen Klopp captured the European Cup, Super Cup, World Club Cup and finally the elusive Premier League, he will want to add to his existing one domestic cup win - earned with Borussia Dortmund in Germany.

Chelsea, currently engulfed in something of an ownership storm due to Russian Roman Abramovich, are set to go full strength for this fixture.  Klopp however is insisting that his League Cup keeper, Kelleher, will come in to the picture to replace Alisson Becker.  The young keeper has featured in all but one of the games on the route to Wembley so far.

The reds are also expected to be without Roberto Firmino, however Diogo Jota could be involved in some part and is likely to start on the bench.

A little under two hours until kick off.

Liverpool FC already have had a late morning stroll around the stadium in which they all appeared calm.  Obviously, the vast majority of the side, and Chelsea, have experienced much more nerve-wracking experiences than this one.

No time for small talk with the watching Sky Sports presents.

Kelleher in goal.  Henderson in for Curtis Jones.  The only changes from midweek.

No such goalkeeping loyalty from Thomas Tuchel.  He drops Kepa Arizzabalaga to put Eduoard Mendy back in.

Thiago injured in the warm up.  Naby Keita starts instead.

The teams are out at Wembley.

A moment in support of Ukraine in which Liverpool fans started belting out YNWA.

God Save the Queen sang, at which Liverpool fans belted out YNWA.

And Klopp and Tuchel walk off with wreaths of flowers in the colour of Ukraine.

Now onto the football.

TV cameras showing Thiago in tears in the technical area ahead of kick off.

He's being consoled by Alisson Becker.

The League Cup Final 2022 is underway!

6' Chelsea slice through the reds defence.  Kai Havertz plays a ball wide and it's passed back to Pulisic.

Good stop by the Liverpool keeper.

7' Azpilicueta buys himself a free kick off Fabinho.  The Chelsea captain has a unique set of 'skills'.

He beats him that time and then Mane successfully has a go at getting past him.

Chelsea have started the better but flickering signs of life from the reds.

13' Thiago Silva down for Chelsea.  Suffered some kind of injury to his rib.

Pops some painkillers and he continues on.

17' Mane again gets the better of Chalaboah.

The reds' Sengalese star is operating centralling but he's getting some joy when he switches to his traditional left wing.

18' Trent with a great ball through the Chelsea defence but Sadio's header is most definitely not on target.

Thiago disappointed just ahead of kick off.

23' Moment of danger for Liverpool entirely caused by Luis Diaz getting involved in defending.

25' Mason Mount takes a tumble.  Him and Azpilicueta rying to get Keita sent off.

31' Thought Liverpool had the lead there.  Mane feeds Keita at the edge of the box - Naby shoots and its stopped by Mendy but Mane then hits the rebound that Mendy somehow gets a hand to.

Brilliant chance for the reds but met with stiff resistance.

35' Kelleher saves again.  Havertz was on a one on one.

Flagged offside in any case but you would have thought Kai Havertz would have made the net ripple there.

39' Another save from Pulisic by Kelleher.  Liverpool's defenders were waiting for the flag to rise but it never did.

40' Azpilicueta dodges a yellow card there.  Brought down Luis Diaz.

42' Azpilicueta drives his shot narrowly over from the edge of the box.

45' Mane loses the ball in the middle and it ends with Mount on a one on one.  His volley goes wide.

Huge chance for Chelsea to score.

Chelsea have cut the reds open too many teams.  But both sides had clear cut chances and it could well have been 1-1.

A real battle between two good sides so far.

48' Havertz, Chelsea's main man, goes past Matip and slides a pass across the six yard box.  Pulisic can't reach that.

49' Mason Mount hits the post.  Had nobody near him.

50' Diaz with a lifted flick forward.  Mane is running on to it but Mendy gets there before him to punch it clear.

55' Luis Diaz causing more mischief.  Earns the reds a corner after a couple of turns on Chalaboah.

Andy Robertson's corner though is weak and cleared.

56' Azpilicueta off.  Replaced by Reece James.

59' Chelsea break quickly and Mount has another opportunity to test Kelleher.

62' Keita and Chalaboah have a coming together.  Chalaboah's gentlemen region comes off worse.

Bit of a delay as both players get treatment and they are back on the field.

64' Salah dinks it over Mendy but Silva is running back and clears that just before it reaches the line.

66' Trent's free kick over to the far post, Mane heads back across and JOEL MATIP thunders his header into the roof of the net!

Goal ruled out by VAR - judged that van Dijk was holding Reece James at the back post.

72' Liverpool players saw that VAR review on the big screen and were incredulous that it was ruled out.

Seems to have spurred them on a bit.

73' Mason Mount and Pulisic off.  Lukaku and Werner on to replace them.

76' Mendy saves from yet another Diaz shot.  The Colombian is having a fine game, so early into his Liverpool career.

78' Haverz puts the ball in the net but van Dijk grabs it behind the line.  It was offside.

80' Henderson, Keita and Mane all off.

Milner, Elliott and Jota all on.

Mane not happy about the substitution.

90' First booking of the game.  Kovacic pulls Salah's shirt as the Egyptian is heading off on a run.

90' Six minutes of added time but before that it's a corner.

95' Kelleher saves after a quick shot from Lukaku from 4 yards out.

Which means that extra time is upon us.

ET 3' Werner collects the ball after Lukaku holds it up.  But his shot is curled over the bar.

90+7' Lukaku puts the ball in the net but the flag is up and VAR confirms he was offside.

A bit of the pace has, understandably, gone out of this game now.

A lot of tired legs on that Wembley turf.

105' Havertz and Trent have a coming together.  Elliott wades in and pushes him.

Elliott and Alexander-Arnold both booked.

105' They are bringing on Jorginho for Kovacic.

110' Chelsea offside again when they put the ball in the net.  Havertz goal ruled out.  Clear offside.

115' Chelsea's Kepa emerges from the tunnel, maybe been watching some penalty videos, and could be coming on for the shoot out.

119' Kepa comes on for Mendy.  Goalkeeping change for Chelsea.

Fresh faced Kepa for Chelsea in a battle with Kelleher who is two hours into his stint.

To be taken at the Liverpool end.

Virgil van Dijk steps up for the reds...

Jorginho steps up for Chelsea' 5th.

Rudiger up next for Chelsea.

Origi up for Liverpool...

Andy Robertson steps up and...

he scores as well.

All the outfield players have scored.

BIGGEST CHEER OF THE NIGHT.

And now Kepa steps up...

He skies it over the bar!

It went all the way to the keepers.

What a day for him

"It’s a mad one. I got close to a few when it came down to me I didn’t even think I had scored the winning penalty. I’d forgotten I’d got the winning one. All the lads were class, I was just happy to score.

"It was more hit and hope. I got close to a few but all the penalties were very high quality thankfully we were able to win.

"I thought we had scored when we got the disallowed goal but they had a few disallowed so I think a draw was a fair result overall."

"He [Jurgen Klopp] just said 'well done for scoring the winning penalty, there's a wall with all the goalkeepers on who have won cups so now you can go on that.'"

Another trophy to the collection

A 10 year and one day wait for a domestic trophy.  Ended. 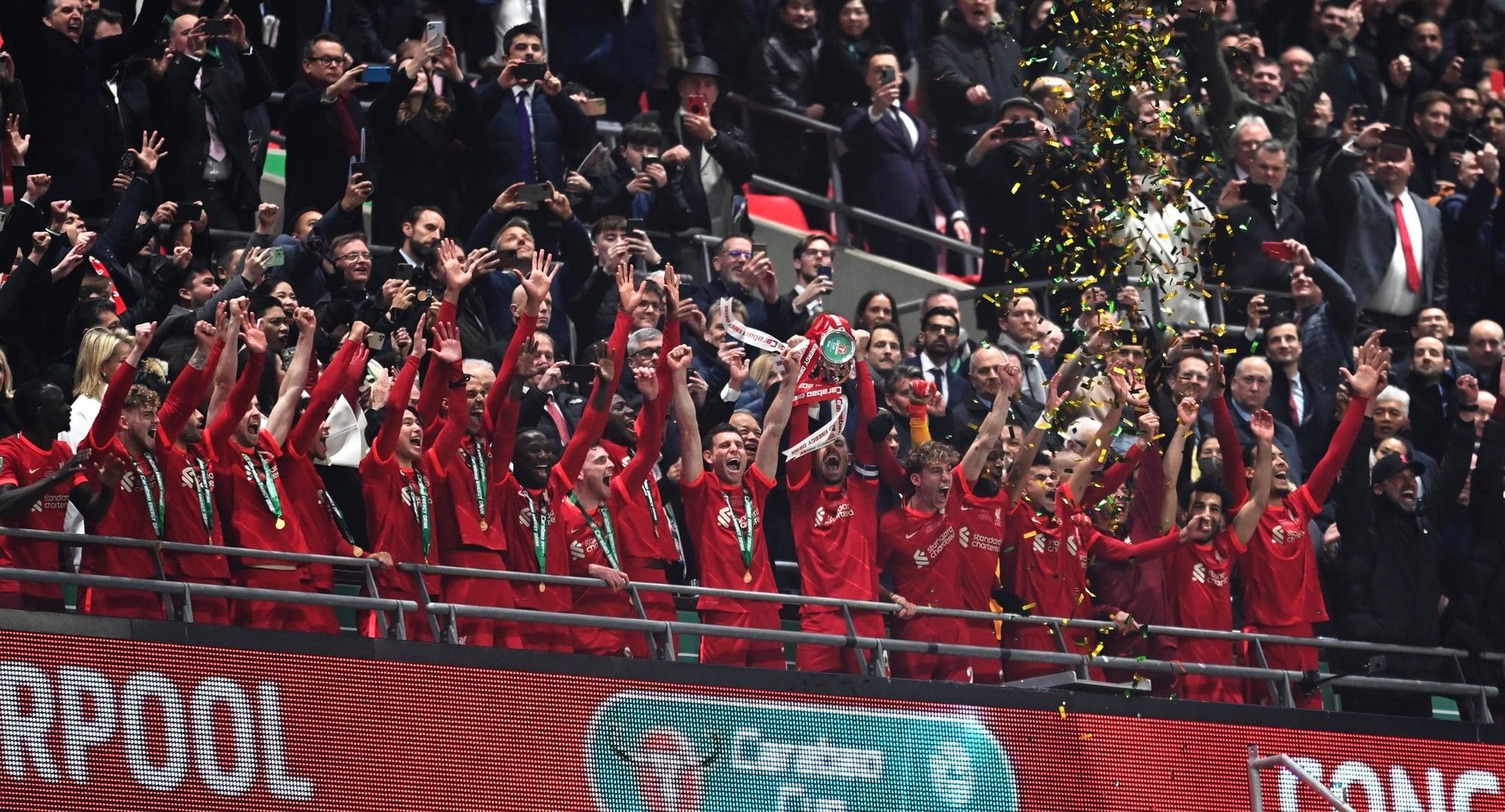 Klopp on why he chose Kelleher: 'I am a human being'

"Even in professional football there should be space for some sentiment. Caoimhin Kelleher is a young boy, plays in all the competition, what do I do? I am two things, a professional manager and a human being and the human being won. He deserves it.

"At the training centre we have a wall that all goalkeepers are on who won something and Caoimhin can go on it - that's how it should be - absolutely great.

"I am happy for the people to celebrate something like this. Chelsea are incredibly strong, we matched each other.

And until Wednesday at least.... The quadruple is on!