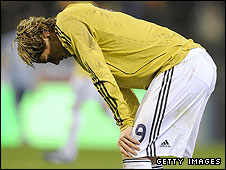 Fernando Torres looks set to be missing for two weeks for Liverpool after scans confirmed the player had suffered a hamstring injury in Spain’s victory over Belgium on Wednesday.

Torres will miss what would have been an emotional return back to Atletico, the club he used to Captain, but more worrying for Liverpool is that player will not only miss that crunch game but also the Premiership game away at Stamford Bridge.

Benitez was quick to point out that this matter isn’t closed and he will want answers from the Spanish national coach over Torres injuries.

“With us, Fernando has had one hamstring injury in 18 months. We need to check why there is a difference with Spain.

“For me the reason is too many games. He played two games in five days, one of them against a country who are not of the top standard. It can be avoided, maybe a better selection.

“Fernando wanted to play next week in Madrid, which will now not happen. His injury is probably the worst he could have had. It is a very bad situation for us, and it is not the first time it has happened.”

Torres will be targeting the midweek clash at Anfield against Portsmouth, on the 29th October, for his return to action.

10 comments on
Torres to miss Madrid and Chelsea