Liverpool continued their 100% start to the season and a second clean sheet away at Selhurst Park.

James Milner converted a penalty at the end of the first half, before Sadio Mane scored his third goal of the season in the dying minutes of the second half.

Klopp had the luxury of choosing an unchanged side from the one which beat West Ham 4-0 last weekend.

With Loris Karius close to completing his loan move away, Simon Mignolet was named as substitute keeper whilst Joel Matip also returned to the matchday squad.

Crystal Palace are a much improved outfit from the start of last season, and won their opening game of the weekend against Fulham.

But Liverpool also look in better shape than last season, and it was a night in which Mo Salah could have had a good solid handful of goals but his finishing was off.

The reds were wearing their new third kit for the first time in the Premier League and Sadio Mane, who was one of the players used to promote the kit in club imagery, was a key performed for the reds.

New reds keeper Alisson Becker repaid some of his fee, with another impressive display including a fine save from a free kick to keep the reds in the lead.

Palace looked organised throughout the game and there was a lot of probing from the reds who dominated possession.

Naby Keita was supplying much of the energy and the creative balls to Salah, but on a couple of occasions he spurned some gilt edged chances.

Towards the end of the first half however the Egyptian was tripped by former red Mamadou Sakho.  And up stepped James Milner to fire in the penalty.

The second half was less good, a bit more pressure on the reds, but van Dijk at the back was immense.  His talent rubbing off on to his fellow centre-back Joe Gomez who also had another excellent game.  Dejan Lovren may not be walking back into this team.

It was from a wonderful piece of van Dijk defending that Mo Salah raced up the pitch only to be fouled by Wan Bissaka who was sent off for the professional foul.

Salah stood over the resultant free kick, at the edge of the box, but his attempt at a perfect top corner curl was headed away.

Adam Lallana came on for Naby Keita, but his major contribution was conceding a late foul near the corner flag.  Fortunately, van Dijk was on hand again to head clear and Salah and Mane powered down the pitch.

It was the Senegal forward who put the ball in the net to end any faint Crystal Palace hope and make it 3 goals in two games.

Liverpool now prepare to return to Anfield next Saturday evening when they will welcome Brighton in the Premier League. 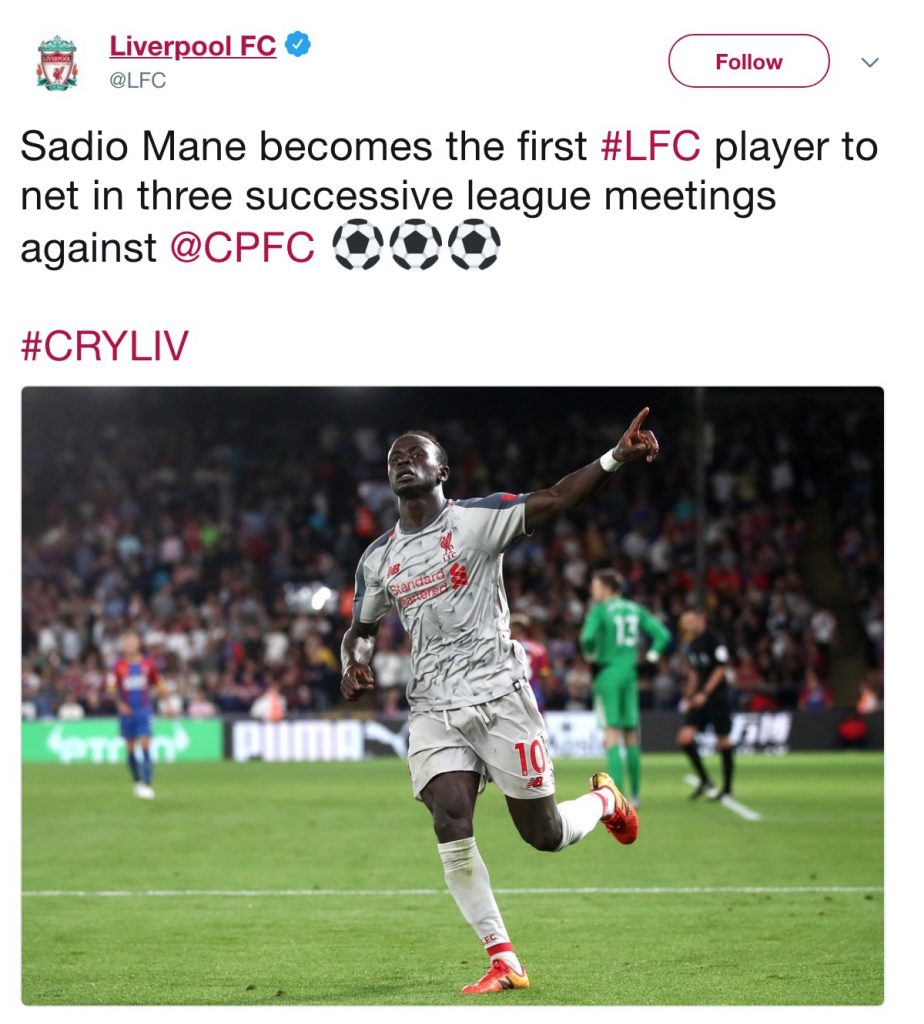