Liverpool handed out another huge defeat as they fired their way into the Champions League group stage.

It puts aside the memory of both Rafa Benitez's final Champions League campaign with the reds of 2009/10 and Brendan Rodgers' dismal effort in 2014-15.

Despite a slow start to the group stages the reds have won the group by some distance and there has been a glut of goals scored by Liverpool's mean and lean attacking machine.

Spartak could have qualified with a win tonight but as early as the 4th minute the reds were in the driving seat.

Klopp picked as strong a Liverpool line up as he could - and that included dropping captain Jordan Henderson to the bench.  Can, Wijnaldum and Coutinho named alongside Salah, Mane and Firmino.

As it happened: LFC 7-0 Spartak Moscow

A quick break from the reds in that early period and Salah was unnecessarily bundled over inside the box.

Up stepped Captain (for the night) Coutinho to coolly dispatch the penalty.

It was all power and pace from Liverpool and Coutinho made it 2-0 after 15 minutes.  Mane fed the ball to Salah, he played it to the right to Firmino who patiently layed it right back across the penalty area for Coutinho to put away a calm finish.

Four minutes later Firmino got the third.  Mane's shot appeared to be stopped by the arm of a Moscow defender, but Firmino capitalised quickly and put the ball in the net before any questions could be asked. 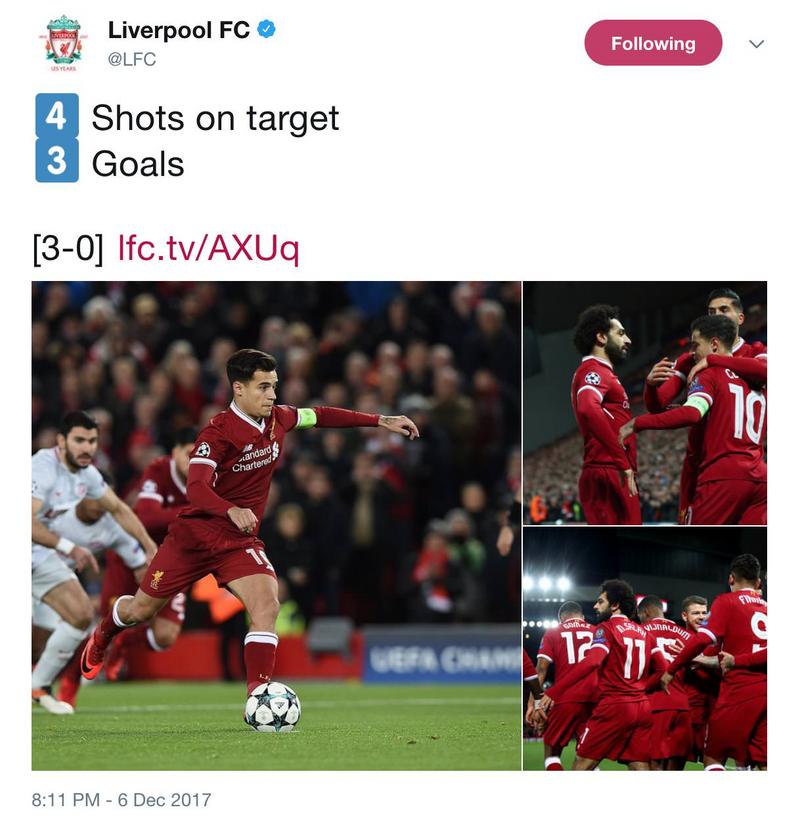 Liverpool's only disappointment was towards the end of the half when Alberto Moreno went off after appearing to twist his ankle when he blocked a shot at close range.  The young Spaniard was emotional at going off and there was warm applause from the Anfield crowd as James Milner came on seconds before half time.

3-0 at half time. The same scoreline as in Sevilla but surely Liverpool wouldn't fold again?

No.  Within 3 minutes of the restart it was 4-0 as Mane got the goal he had been threatening in the first half.

James Milner swung in a deep cross from the left hand side and Mane put all of his laces through it as he smashed it in the net.

As the 50th minute arrived on the scoreboard so did the 5th goal.  Coutinho completing a hat-trick through perhaps a fortunate deflection from a Spartak defender.

Roberto Firmino and Dejan Lovren both made way for the reds with an eye now firmly fixed on the weekend's game v Everton and it was substitute Sturridge who laid the ball across to Sadio Mane to add a 6th from close range.

Every ball now was being funnelled to Mo Salah and eventually - with the clock ticking down the Egyptian got his goal (his 18th of the season) when he twisted and turned in the area before firing high into the Kop net.

The referee didn't add any time on to save Moscow more torture and the reds finish with a 7-0 scoreline and comfortably top of the group.

The draw awaits and there won't be many teams who will want to face Liverpool over two legs.