Liverpool will not be heading to Wembley after a night when Rafa sent out the boys to play the men at Chelsea.

Benitez made 9 changes from the weekend clash against United, and although some big names were present it was clearly a second string Liverpool side.  The reds played some decent football and Chelsea’s keeper can be credited with keeping the scoreline to 0-0 for long periods but when Frank Lampard scored followed minutes later by a straight red card to the lunging Peter Crouch the game, and Liverpool’s chance in this competition had ended.

Now, breaking with tradition and in what could become a new feature – it’s the ‘Anfield Online can’t be arsed match report’….

Fat Frank scored thanks to a deflection off Carragher on about 55 minutes.

Jon Obi Mikel, in usual style, got away with a few tackles on Crouch before he stupidly retailiated with an attempt at the long jump – two footed in to Mikel.  Even better Crouch did it right in front of the managers.  The result – a straight red card.  A nice 3 games off over the festive season for Peter then – excellent work (please send your pay packet for the next two weeks back to the Anfield Stadium Fund, thanks). 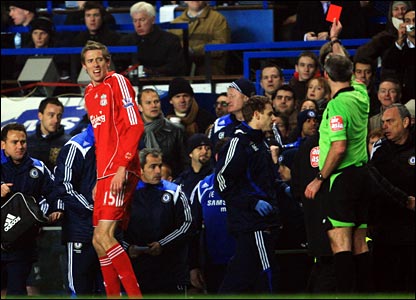 Liverpool down to ten men and start to play like a beaten side.

That was it really.  If you travelled all the way down to see us dumped out the cup then I hope it makes you feel better that Steven Gerrard, Reina, Torres etc were all sat at home getting some ‘girlfriend-time’ in.

Some kind of defence of Peter Crouch….

Some kind of defence of Jon Obi Mikel….