(Goals in the forum)

A 90th minute Gerrard goal spared Liverpool’s blushes and ensured the reds got 3 points against a side destined to be playing Championship football next season.

The reds seemed unable to kill Derby off after taking a first half lead through that man Torres again. When Derby pulled the equaliser out the bag it looked all but certain that the reds would be leaving Derby red-faced. Fortunately for all involved (well apart from Derby) the captain Steven Gerrard scored in the 90th minute handing the reds a valuable three points, especially with Chelsea drawing and United handing out another thrashing to Sunderland.

Earlier this season the reds hammered Derby 6-0 at Anfield, and if that ruthless streak had been present in the first half the reds should have been comfortably on their way to a similar scoreline.

Fernando Torres opened the days scoring on 12 minutes, a typically stylish goal from the Spaniard (does he not do tap-in’s?) and off we were. Babel and Carragher had great opportunities to double the scoreline, and Torres could have notched another but for a great last ditch tackle.

Derby came out after the break determined that to prevent the reds getting too far ahead and deserved their equaliser after a free kick led to a game of pinball in the reds box which eventually McEveley pounced upon to score in the 67th minute.

Liverpool then were shooting on sight in desperation of the winner. Eventually that man Torres fired a shot too hot to handle and unfortunately for Derby it landed in the path of the incoming Gerrard who put the ball away. 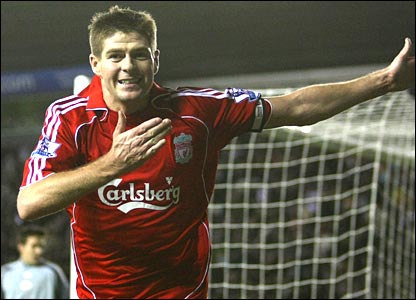 “We were much better in the first half, but we could not kill the game off.

“That made it difficult for us. In the second half they were more aggressive and put us under a lot of pressure.

“We gave the ball away too much but in the end Gerrard scored, a player like that will always come to the fore in the end.”

“There’s not much justice in the game, particularly after battling so hard in the second half.

“I was bitterly disappointed with the first-half display, we looked frightened, scared of Liverpool.

“I couldn’t wait to get at them at half-time, but in the second half we showed fight, and that is what the supporters want to see.”