Liverpool and Chelsea played out a 1-1 draw at Anfield with both goals arriving in the second half.

There were a few changes for the reds - notably up front.  Sadio Mane and Roberto Firmino were both named on the bench with Alex Oxlade-Chamberlain and Daniel Sturridge given the nod to start up front along with Mo Salah.

Joel Matip recovered from his muscle injury and replaced Lovren in the side.  Alberto Moreno and Joe Gomez both kept their places from midweek and James Milner came in to midfield replacing Gini Wijnaldum.

Both sides were involved in European away trips in midweek but the first half wasn't a lethargic one.

The reds controlled the play for the majority of the first half - but excellent defensive work and shape, combined with a weak final ball, meant that the reds didn't test Courtois.  Mo Salah was involved in the reds best chances of the half but saw a shot edge narrowly wide and another go over the crossbar.

Daniel Sturridge's involvement was limited - with the England man possibly too deep as opposed to the position we perhaps see Roberto Firmino occupy.

Eden Hazard however was the man on form in the first half - constantly creating his own space and moving through the Liverpool midfield.  Mignolet was by far the busiest of the two keepers in the first half - tipping a good shot over and pushing a Hazard shot around the post.

As it happened: LFC 1-1 Chelsea

There were shouts for penalties at both end.  Joe Gomez timed a tackle just well enough inside the area to dispossess Hazard - although the player did crumple under the tackle.  But the Belgian could have conceded a penalty of his own.  After good work by Oxlade-Chamberlain the ball was crossed into the area but Coutinho appeared to be pushed over inside the area by the Chelsea attacker.

The referee Michael Oliver waved away both first half incidents.

The second half saw no changes at the break - but it was Chelsea who started with the most threat.  Liverpool were allowing them to enjoy possession amongst their centre-halves and build play - with Morata only denied a clear goalscoring chance thanks to good work by Ragnar Klavan who deflected a cross.

The 65th minutes approached and the reds were preparing their first substitution - bringing on Gini Wijnaldum.

But before he came on the breakthrough - Mo Salah firing in his 15th Liverpool goal in 20 games. 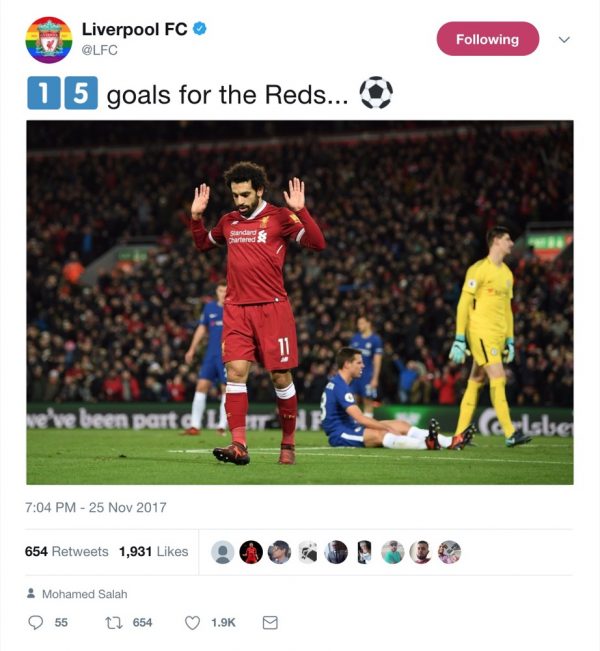 There was good work from Coutinho, Oxlade-Chamberlain at the edge of the box toe-poking a pass and Mo Salah didn't break his run into the box as he slid the ball past Courtouis.  1-0 to Liverpool.

The reds made the substitution straight after - Daniel Sturridge making way for the home speciality midfielder.

Chelsea made more changes - Fabregas and Pedro sent on to replace Danny Drinkwater and Bakayoko.

The goal incentivised Liverpool - and knocked the stuffing out of Chelsea.  Azpilicueta was responsible for keeping the scoreline respectable - as Salah was twice denied good goalscoring chances.

Liverpool were showing remarkable defensive discipline but with ten minutes left a ball came across that Marcus Alonso really should have done better with.  From 10 yards out his left footed volley was fired over the crossbar from an unmarked position.

Willian came on with just under 10 minutes to go and his involvement would prove crucial.

From the edge of the box he sent in what initially appeared to be a cross but it looped over Mignolet and into the net to level the score. 1-1.

Adam Lallana had been waiting on the sidelines to come on but the Chelsea equaliser initially appeared to end his cameo.  But minutes later he was back up, jacket off and came on with Sadio Mane as the reds attempted a last throw of the dice.

It was too late however and the reds couldn't quite manage to get all three points against the reigning Champions.