Mo Salah was the Liverpool hero with two second half goals after the reds went behind to a Jamie Vardy strike in the 3rd minute.

Liverpool dominated the vast majority of the game and were unlucky to find themselves behind at half time with Salah missing three decent first half chances before correcting his aim in the second half.

Sadio Mane saw two goals ruled out through offside but provided the backheel for Salah's equaliser.

The pre match hype had focussed on the presence of Virgil van Dijk who was at Anfield to watch his new teammates in action. 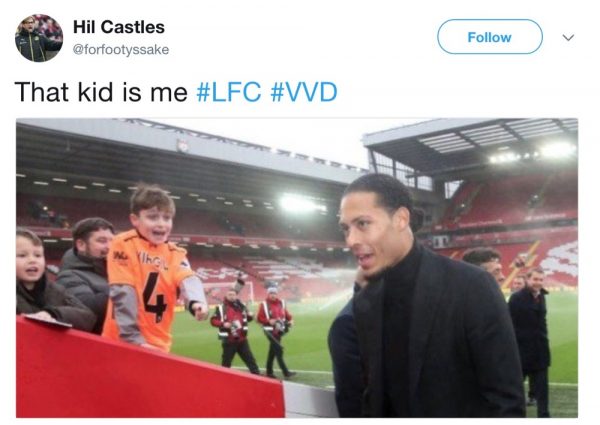 There were more changes too.  Loris Karius was a surprise inclusion with Mignolet dropping to the bench, however Klopp insisted pre-match that this was simply down to rotation.

Emre Can and James Milner were preferred in midfield, and Joe Gomez made his return to the starting XI.

An early team error, just 3 minutes in, enabled the spotlight to be turned fully on the £75M sitting in the stands.

Matip's poor pass out from the back was met with an over-ambitious slide from Emre Can when he may have been better to stay on his feet.

The ball was then pinged past the stranded Lovren and out of position Robertson - allowing Mahrez to cross over to the onrushing Vardy who put the ball in the net.

Liverpool then searched hard for a quick equaliser.  Salah missing the target not once, twice but three times in a brief period.

Sadio Mane did manage to put the ball in the back of the net but celebrations were shortlived as the linesman immediately raised his flag.

Leicester were managing to get away with enough minor fouls to hamper the reds rhythm, and with Kasper Schmeichel time-wasting, eventually the reds pressure eased and Leicester ended the half more comfortably.

Second half, kicking towards the Kop there was more vigour from Liverpool.

A neat backheel from Mane at the edge of the area found Salah inside it in the 53rd minute.

There he turned two Leicester players before firing in with that trademark left footed shot.

No time for a huge celebration however as the reds rushed back to the half way line to go on the hunt for a winner.

The reds were forced to wait for that - with restlessness increasing at Anfield.

But in the final 15 minutes Salah turned Harry Maguire and scored his 23rd goal of the season and his 17th Premier League goal for LFC in 21 appearances to date.

Liverpool solidified their structure through some defensively minded substitutions and the final whistle was greeted with a fist in the air from Klopp and some on-field hugs.

The win moves Liverpool past the 40 point barrier and means the club will remain inside the top four when for the New Year.

Not much rest for the reds who travel to Burnley on Monday.