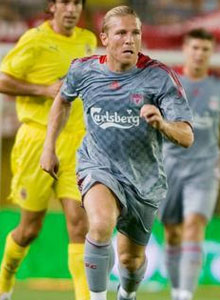 Andriy Voronin (nicknamed The Raven) signed on a free transfer from Bayer Leverkusen and arrived at liverpool on the 6th July 2007.

After Mainz failed to gain promotion to the top flight he moved to recently promoted FC Koln appearing 19 times scoring 4 times only to see Koln fail to hold on to there place in the top flight prompting a move to FC Cologne. However, he spent just a year at his new club before Leverkusen swooped. Voronin stayed at Bayer Leverkusen for three season making 92 appearances scoring 32 times before his move to Anfield.