After the game the reds boss, Jurgen Klopp, declared his side as a 'joy to watch' although it wasn't until the second half that the reds made it secure.

The Liverpool boss kept faith with goalkeeper Simon Mignolet, but Dejan Lovren and Joe Gomez both made way with Joel Matip returning to the side and Trent Alexander Arnold handed a start.

Sadio Mane was also left on the substitutes bench.

Both Coutinho and Mignolet were making their 200th competitive appearances for Liverpool.

Those changes however were not the topic of discussion as early as five minutes in when Philippe Coutinho curled in a shot from a Salah pass to send the reds on their way.

The signs looked ominous for the managerless swans.

But they mounted a decent attempt in the game - and Roberto Firmino was guilty of missing a couple of gilt edged chances in the first half period.

Swansea had little intent up front but had decent spells of possession in the first half.

Second half - reds turn on the style

Second half however, the reds put their foot to the metal.

In the 52nd minute, Firmino latched on to a well worked Coutinho free kick to power in unmarked at the back post. 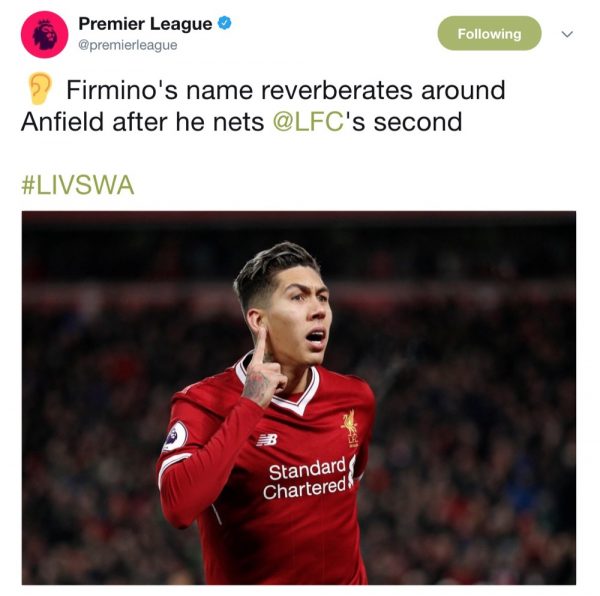 With twenty five minutes remaining local right back Alexander-Arnold controlled a poor clearance and smashed into the roof of the net.

A minute later it was four.  Salah intercepting another ball deep inside Swansea's area, and finding Firmino for a simple tap in.

Firmino was subbed shortly after - his work for the evening done and he has been Jurgen Klopp's most effective player since the German arrived over two years ago with 39 goals and 25 assists under the current Liverpool boss.

There was still another goal in the game to come within the final ten minutes.

Oxlade Chamberlain grabbed his first Anfield goal, and Liverpool's fifth of the day with when he too capitalised on a poor clearance.

Simon Mignolet was a relative bystander for the game although did stop a Tammy Abraham shot with the final action of the match.

Liverpool are now the third highest scoring side in Europe this season, after PSG and Man City.

Although Man City do look to have sewn up the Premier League title with some phenomenal form - the reds have enjoyed a consistent period now inside the top four and have narrowed the gap on 2nd placed Manchester United.