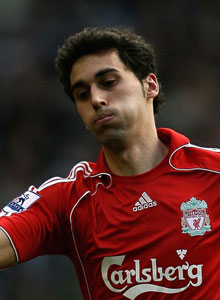 Alvaro Arbeloa signed for Liverpool in the January transfer window in 2007 from Deportivo La Coruna. Former club Real Madrid received half of this transfer fee.

Arbeloa is capable of playing in any defensive position spending most of his first season at Anfield playing at left back before jostling with Steve Finnan for the right back position in 2007/08. He started the 2008/09 season as Liverpool's first choice right back.

His career started as a youngster with Real Madrid and he moved through all three of the Real Madrid teams although he only played twice for the full first team before moving to La Coruna.

His full LFC debut came against Barcelona in the Nou Camp where he helped keep Messi quiet to help Liverpool run out 2-1 winners on the way to another European Cup final.

Whilst at Liverpool he was selected to play for his country for the first time in February 2008, but due to injury his first international appearance was against Italy. He was part of the Spain squad that won the European Championships in 2008.

After returning to Anfield with a European Championship winners medal, Arbeloa started the season a little shaky. But as the season went on the Spanish international grew in confidence and became a vital part of the Liverpool back four. He also scored his first goal at home during the 08/09 season, a screamer against West Brom with his weaker left foot. Along with that goal, he also notched up ten yellow cards which was more than any other Liverpool player.

Right back gone, left back going